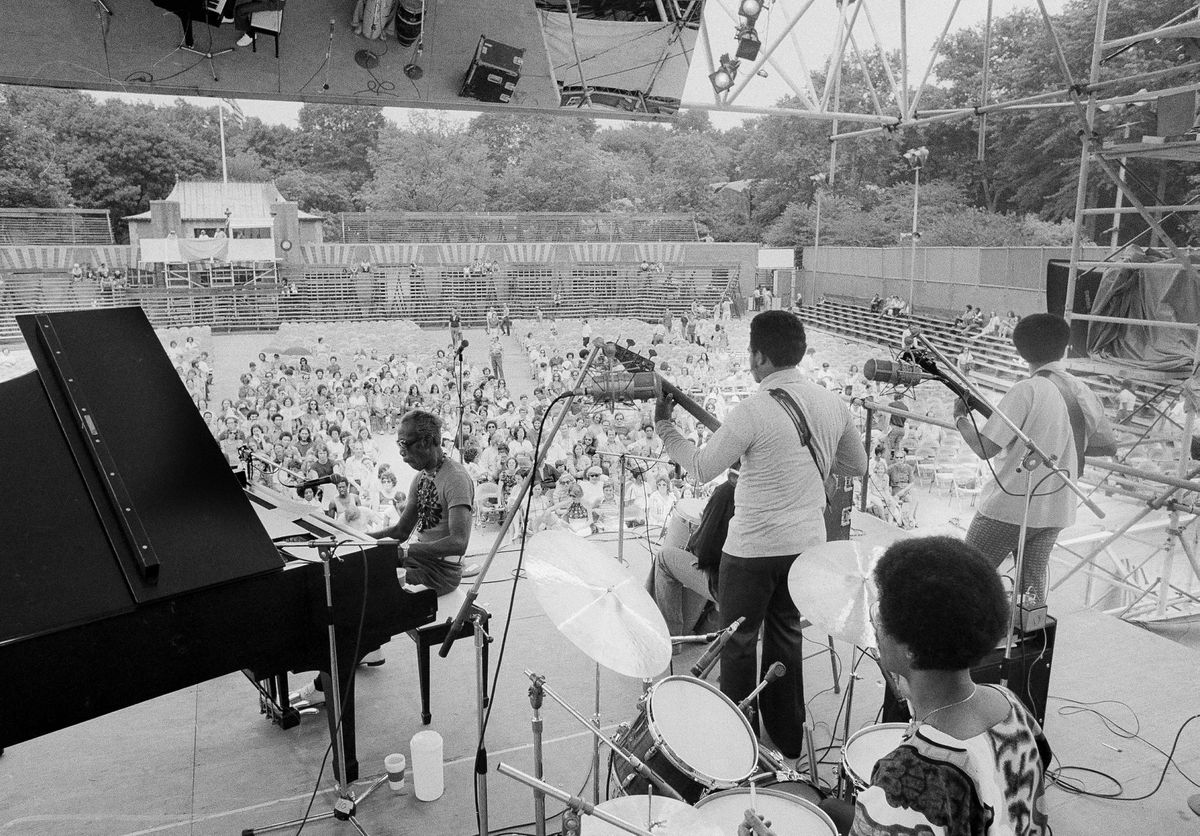 Professor Longhair, at the piano, plays the Newport Jazz Festival in 1973. (Richard Drew/AP)

Professor Longhair, at the piano, plays the Newport Jazz Festival in 1973. (Richard Drew/AP)

If you’re not already a fan, your vision of jazz might contain a guy (always a guy) in a fedora playing tenor saxophone in a smoky bar. Or a self-satisfied aficionado waxing poetic about a rare free-jazz LP, acting as though he’s the only one capable of decoding its knotty melodies as he pushes his glasses up his nose. Yes, jazz has an image problem: More than a century after its genesis, the genre remains shrouded in many of the same erroneous cliches that initially made it so controversial - as well as a slew of newer ones. The trouble comes when that mystique looms large enough to keep people from ever exploring the music.

Myth No. 1: Jazz is more serious than other genres.

"People, when they say that they 'hate jazz,' they just don't have context - they don't know where it comes from,"explains the exasperated protagonist of the 2016 hit musical "La La Land." Ryan Gosling's character is the exact kind of straw man that often represents jazz in popular culture, arguing that what makes the music good is an intrinsic complexity and importance that requires great intellectual rigor to comprehend. Whether in "Jerry Maguire," "The Office" or "Veep," jazz's self-serious reputation has turned it into shorthand for snobbish orthodoxy. Even participants promulgate this notion. "The greatness of jazz lies not only in its emotion but also in its deliberate artifice," wrote Wynton Marsalis in a 1988 New York Times essay.

In fact, jazz requires exactly as much or as little expertise to listen to and appreciate as anything else. Understanding the music's history can certainly inform the listening experience - as with music from any genre - but all you really need to appreciate jazz is open ears. Reverence and study are not prerequisites: After all, many of the most canonical jazz records were meant to be danced to.

Myth No. 2: Jazz was born in New Orleans.

One oft-cited, very easy history of jazz begins with the relative musical liberation of New Orleans' Congo Square, continues with cornetist Buddy Bolden and pianist Jelly Roll Morton (who played in Storyville, the city's red-light district), and moves with Louis Armstrong up the Mississippi on the paddle wheel boats to Chicago. New Orleans was the most cosmopolitan city of its time, a place where African Americans had many more opportunities to participate in public life. This is the way Ken Burnstells it in his massively popular documentary "Jazz," and the way it was told for decades prior by everyone from renowned jazz historians like Marshall Stearns to the National Park Service.

But the trouble with this story is that jazz had no Big Bang. Its roots involve so many different kinds of music: blues, spirituals, West African rhythms as they had been reimagined in the Caribbean, European classical music and more. Those sources informed musicians around the country. As a result, music we would now identify as jazz emerged almost simultaneously in a number of different communities from Jacksonville to Kansas City around the turn of the century. Unfortunately, the documentation of jazz's earliest days is so poor that it might be impossible to ever truly understand them.

"Most jazz is very rhythmic [and] has a forward momentum called 'swing,' " explains the website for the National Museum of American History. (Now, name a music that is not "very rhythmic.") Swing is a way of playing eighth notes unevenly to produce a shuffle effect. It was one of the initial innovations of jazz and quickly became one of its distinguishing features. "Swing" and "jazz" are often treated as interchangeable terms because of the assumption that swing is one of jazz's essential qualities: Jazz at Lincoln Center's education program, for example, is called Swing University.

But "straight" eighth notes have been integral to jazz from the start, especially in jazz from the Caribbean and South America, such as mabo or bossa nova. Dave Brubeck combined "straight" eighth notes and swing to monumental effect on "Blue Rondo a la Turk" in 1959, and playing "straight" has become popular among contemporary jazz artists - who, like Brubeck, are also prone to experimenting with unusual time signatures. Those experiments tend to be a little simpler rhythmically when musicians aren't trying to swing as well.

Myth No. 4: Jazz musicians were (or are) on drugs.

"Charlie Parker's heroin addiction helped make him a genius," argued the New York Post in a recent article, just one of the countless places where jazz musicians' habits - not their work - are featured front and center. (Parker, like a number of jazz musicians, was a user; he died at 34 because of complications from drug use.) It's a sensationalized, romantic vision of the music, one that reinforces an imagined connection between addiction and superlative creativity. And it's not new: Since the days of "Reefer Madness" (1936) and "The Man With the Golden Arm" (1955), jazz music and its practitioners have been linked in popular culture with illicit drug use.

But the majority of jazz musicians did not regularly use intravenous drugs, according to an anonymous survey conducted by Nat Hentoff in the late 1950s - even though heroin was in vogue while the music was most popular. Instead, the cliche plays into a long, racist history of disproportionately prosecuting black drug users. The now-humorous cannabis euphemism "jazz cigarette" has its roots in early propaganda designed to paint black communities (and their artists) as dens of iniquity - and create reasons to arrest them. After various drug prohibition laws went into effect, they were enforced against black artists to seize their cabaret cards and thus keep them from performing. The notion lingers despite the fact that hard-drug users account for an even smaller proportion of jazz musicians today.

Jazz accounts for 1 percent of music consumption - album sales and streaming - in America, according to Nielsen. The Michigan Daily recently described jazz as "a genre considered to be 'dying,' if not dead already." Who can blame the student journalists, when outlets like CNN still grapple with the question: "What was the cause of death, and when did it pass away?" it asked in 2016.

But people have said jazz is dead since Charlie Parker and Thelonious Monk had the moldy figs aghast with their audacious bebop in the 1940s. Though there are real questions about whether the term “jazz” is useful, the music it describes has always been diversifying and regenerating. If anything, streaming technology presents unprecedented opportunities for music makers and fans to learn more about jazz’s history, as well as the wide range of artists active today. It’s integral to hip-hop (just listen to A Tribe Called Quest or J Dilla) - now the dominant form of pop music - and vibrant jazz scenes in Los Angeles, Chicago and London speak to a new generation of artists committed to live, local music. Physical album sales are growing incrementally thanks to the vinyl renaissance, and festivals remain generally well attended. In many ways, the music is healthier than it’s been in decades.