Five myths about the U.S. Senate 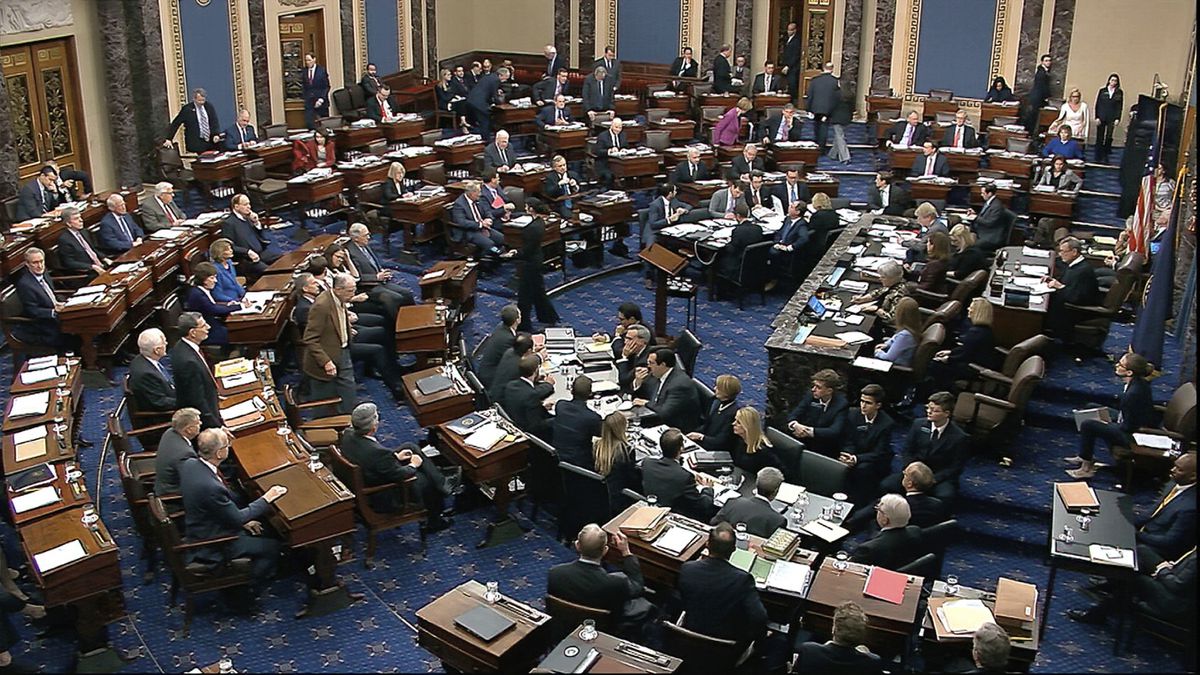 In this image from video, Senators cast their vote on the motion to allow additional witnesses and evidence to be allowed in the impeachment trial against President Donald Trump in the Senate at the U.S. Capitol in Washington, Friday, Jan. 31, 2020. The motion failed with a vote of 51-49. (Senate Television via AP)

In this image from video, Senators cast their vote on the motion to allow additional witnesses and evidence to be allowed in the impeachment trial against President Donald Trump in the Senate at the U.S. Capitol in Washington, Friday, Jan. 31, 2020. The motion failed with a vote of 51-49. (Senate Television via AP)

President Donald Trump’s impeachment trial has put international focus on the U.S. Senate, an institution that ordinarily attracts far less attention than the one it’s meant to keep in check at the other end of Pennsylvania Avenue. During the many lulls in the constitutional drama, the media has drawn on the Senate’s storied history and quirky customs as filler chatter in their commentary. That creates a reassuring sense of continuity - a picture of Congress’ upper chamber as a steady, if eccentric, guardian of the people’s freedoms. But the Senate has changed. Understanding just how much requires cutting though a fog of nostalgic mythology.

Myth No. 1: The Senate is the world’s “greatest deliberative body.”

Often attributed to President James Buchanan, this description has been parroted by senators in speeches and editorials, and made it onto the chamber’s official website. No less an authority than Chief Justice John Roberts rolled out this hoary cliche when he recently admonished House managers and the president’s lawyers to “remember where they are.”

Never mind that members of the British Parliament might take exception to this self-serving characterization. The real problem is that debate is a participatory sport, and most senators simply aren't engaging: C-SPAN daily reveals the embarrassing sight of Congress' nearly empty upper chamber. One of the most remarkable aspects of the impeachment spectacle is that it has brought all the members of the Senate into the chamber at the same time; normally, you'd be lucky to find three. And their well-documented fidgetiness demonstrates that senators have lost the habit of sitting in their well-appointed chamber and listening.

The Senate's reputation as a great debating society has largely been based on the rules that give its 100 members unlimited time to discuss whatever topic they choose, as longtime congressional historian Ray Smock has noted. But the only way you're likely to see one of the Senate's fabled talkathons these days is by rewatching "Mr. Smith Goes to Washington," thanks to recent attacks on the filibuster by majority leaders of both parties, who have been frustrated by the use of the parliamentary move to block votes on legislation and nominees.

Myth No. 2: The Senate is the ultimate inside-the-Beltway club.

The upper chamber of Congress has enjoyed a reputation as a chummy place where personal relationships trumped political differences: Think of then-Sen. Joe Biden, D-Del., delivering a 2003 eulogy for former senator Strom Thurmond, R-S.C.; of the odd-couple friendship of Sens. Orrin Hatch, R-Utah, and Ted Kennedy, D-Mass., or the one between Sens. John McCain, R-Ariz., and Joe Lieberman, D-Conn. But in recent years, the bonds among those "old bulls" haven't been enough to salve the nation's discontents.

The extraordinary bipartisan paroxysm of grief in the Senate when news broke of Kennedy's terminal-cancer diagnosis in 2008 may have been in part because members sensed the end of an era. Now each party has hardened into ideological silos, and within those silos exist jealously guarded personal brands. For senators such as Rand Paul, R-Ky., Ted Cruz, R-Texas, and Bernie Sanders, I-Vt., their most important relationships are with their passionate political bases. Ties among colleagues, in an era of three-day Washington workweeks, are almost nonexistent.

Biden provides the starkest sign of how much these bonds have broken down: Some senators who served with and profess admiration for him now urge that he and his son be hauled before the chamber for a public cross-examination. In the very clubby Senate I first started covering in the 1980s, it would have been impossible to imagine members exploiting a colleague's troubled family for political gain.

Myth No. 3: The Senate is old-fashioned and genteel.

Yes, 48 of the chamber's wooden desks date to 1819. Yes, one of them has been a designated "candy desk" since Sen. George Murphy, R-Calif., first started keeping his stash there more than a half-century ago. The Senate even has an official Doorkeeper's office whose staff members discreetly inform members of breaches of etiquette: jackets for men, no sleeveless dresses or open-toed shoes for ladies, and no electronics on members' desks. Rules of procedure enforce a quaint formality. Senators refer to one another in the third person: "the distinguished senator from New York" or "my friend from Alabama."

But none of this should promote the sentimental fantasy that courtliness still reigns. Along with large brass spittoons on the floor, the Senate has satellite dishes on the roof, and members regularly avail themselves of everything technology has to offer to excite and inflame passions. Just this past week, the nation's newest senator, Kelly Loeffler of Georgia, lobbed a zinger via Twitter at fellow Republican Mitt Romney after the Utahn suggested he might support calling witnesses in the impeachment trial. The saucer designed to cool the coffee - the role our nation's founders are said to have ascribed to the Senate - appears to have cracked, leaking boiling-hot liquid all over the body politic.

Myth No. 4: The Senate serves as a check on executive power.

Toward the end of his nearly 52-year tenure in the Senate, Robert Byrd often used to repeat that while he had served with 11 presidents, he had served under none. The Senate of late has made some moves toward reclaiming its Article I constitutional powers as a check on the executive branch, with a bipartisan effort to debate a new war powers resolution and a repudiation of the Trump administration's continued overtures to Saudi Arabia.

This is thin gruel compared with earlier challenges to the White House. It's hard to imagine a member of the president's party today mounting an extensive public challenge to his foreign policy, as J. William Fulbright did with hearings that questioned President Lyndon Johnson's prosecution of the war in Vietnam. Even more improbable: the notion that a delegation of senior Republicans would or could call the president to heel, as did the Republican senators who delivered the message to President Richard Nixon that he had to resign.

Research shows that for the most part, senators are hardly the stalwart checks on executive authority that Byrd suggested. Most Republican senators vote with the current president more than 90 percent of the time, as the website FiveThirtyEight has documented. According to Roll Call, when Barack Obama was president, Democrats did the same thing.

Myth No. 5: The Senate is a representative body.

It is natural that most Americans make this assumption. After all, we've been able to vote for our senators since the ratification of the 17th Amendment in 1913, and every schoolchild learns that citizens choose members of the legislative branch to represent them.

But the Senate was never designed to be as democratic as the House. Since every state, regardless of its population, gets two votes in the Senate, it is the nation's only legislative branch not organized along the principle of "one person, one vote." The U.S. population continues to concentrate in urban and coastal areas,so the political imbalance grows. States representing 18 percent of the population now elect a majority of the Senate, as the Cook Political Report has pointed out.

Then there is the distorting impact of money. The average cost of winning a Senate race rose from $3.9 million in 1990 to $15.8 million in 2018, according to the Center for Responsive Politics. It’s no wonder that senators spend so little time on the floor and have recently taken to penning up credentialed members of the congressional press corps: They need to get off campus to attend the many political fundraisers at restaurants around the Capitol complex.

Five Myths is a weekly feature from The Washington Post