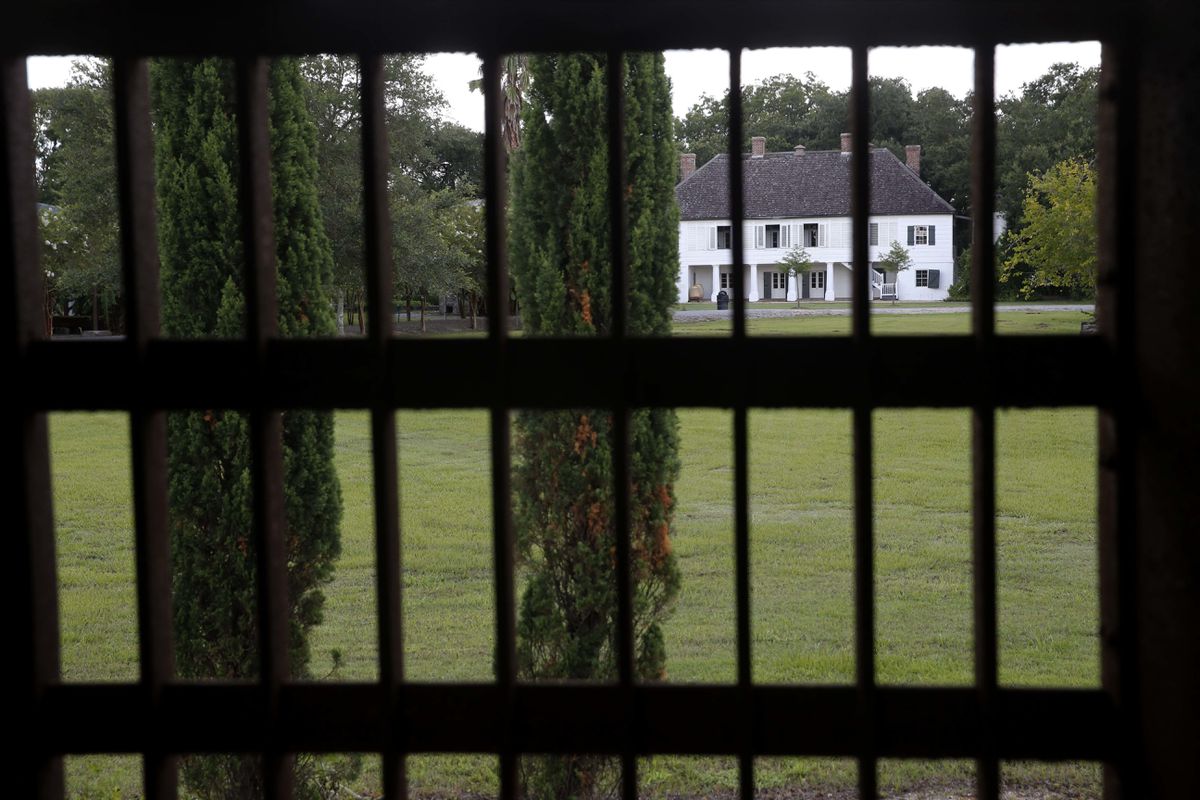 In this July 14, 2017 photo, the main plantation house is seen through the bars of a jail, similar to one's used for slaves, at the Whitney Plantation in Edgard, La. Owner John Cummings opened Whitney as a slavery museum, bucking a tradition of plantation tours that romanticize antebellum life and gloss over the slave trade. (AP Photo/Gerald Herbert)

In this July 14, 2017 photo, the main plantation house is seen through the bars of a jail, similar to one's used for slaves, at the Whitney Plantation in Edgard, La. Owner John Cummings opened Whitney as a slavery museum, bucking a tradition of plantation tours that romanticize antebellum life and gloss over the slave trade. (AP Photo/Gerald Herbert)

Berry, a history professor at the University of Texas at Austin, is the author of “The Price for Their Pound of Flesh: The Value of the Enslaved, From Womb to Grave, in the Building of a Nation” and “A Black Women’s History of the United States.” LeFlouria, an African American studies professor at the University of Virginia, is the author of “Chained in Silence: Black Women and Convict Labor in the New South.”

Only 8 percent of high school seniors can identify slavery as a central cause of the Civil War, according to a recent Southern Poverty Law Center survey. The average American has grown up believing a slew of myths about the institution. As scholars of slavery and its aftermath, we’ve identified a few of the many misconceptions we have encountered in the classroom and in public spaces over the years.

U.S. history textbooks commonly introduce 1619 as the year Africans arrived in America. This date has appeared in sources such as the Atlanta Journal-Constitution and the Associated Press, and it has become even more entrenched in the popular imagination thanks to the New York Times Magazine’s 1619 Project, commemorating the anniversary of the “20 And Odd. Negroes” who landed at Point Comfort, Va., 400 years ago.

While this date is indeed significant to British arrival and settlement, Africans came to America well earlier. Some, such as Juan Garrido and Esteban, came as explorers with the Spanish in 1503 and 1528, respectively. Because of their mobility and influence among the conquistadors, historians offer differing interpretations on whether they were ever enslaved, but at some point, both men were considered free. Another example is Isabel de Olvera, a free woman of African descent, who in 1600 went on an expedition to New Spain (a region comprising present-day New Mexico, Arizona, Florida and other parts of North and South America), in search of trade goods and new places to settle. These stories, too, are important to U.S. history: They place the starting point of African American history in freedom, as well as enslavement.

Myth No. 2: Enslaved people who worked in the house had easier lives.

In a 1963 speech, Malcolm X strongly separated enslaved people who worked in the house from those who worked in the fields, claiming that the former group enjoyed greater privileges and comforts and that some even identified with their enslavers. Texts designed to teach children about slavery also often assert that people forced into domestic labor had more comfortable and pleasant lives than those forced into agricultural labor.

But the distinction is not that simple. While a few of the very largest plantations had entirely separate labor pools, says historian Greg Downs, in most households, laborers moved between tasks depending on their age or the season. And working indoors had its own physical and psychological hardships. Enslaved people were on call 24 hours a day, mostly on their feet and in close proximity to their enslavers, which led to greater scrutiny of their work, according to historian Deborah Gray White. Some of this labor included helping their enslavers dress, bathe, style their hair and fan flies, in addition to cooking, cleaning and running errands - intimate interactions involving personal touch and knowledge of people’s innermost lives. In these settings, writes historian Thavolia Glymph, domestic laborers often experienced physical and sexual abuse.

Myth No. 3: Slavery was limited to the South.

When people think about slavery in the United States, they often picture large cotton plantations in the Deep South. One popular textbook claims that while cotton "enriched planters in the South, as well as bankers and shipowners in the North,"the latter still relied on a "free labor system." Similarly, the College Board's curriculum for Advanced Placement U.S. history states that "the North's expanding manufacturing economy relied on free labor in contrast to the Southern economy's dependence on slave labor."

But these accounts, which simplistically oppose "free" Northern states with "slave" Southern states, neglect to mention the long-standing presence of enslaved labor in the North.

Slavery touched nearly every corner of this country. Northern communities supported and benefited from Southern slavery through the shipbuilding, textile and shoemaking industries. In Rhode Island alone, traders shipped more than 100,000 African captives to the Caribbean and American colonies, according to “People Not Property,” an online documentary. Plantations along the Connecticut, Delaware and Hudson rivers relied on enslaved workers to produce wheat and process it into flour. Slavery was widespread at universities: Georgetown University sold enslaved laborers to pay off debts to keep the school in operation, and early presidents of Harvard brought enslaved labor to work on campus. Enslaved laborers built the structure in Lower Manhattan for which Wall Street is named.

Myth No. 4: Women were not as involved in slave-owning as men were.

The 1939 blockbuster “Gone With the Wind” cemented the myth of the essentially innocent Southern belle, who only passively benefited from slavery. Throughout the 1970s and 1980s, historians who studied female slaveholders tended to portray them as ambivalent about a role inherited from their fathers or husbands, making the best of a situation over which they had no control.

In fact, white women actively participated in the institution of slavery. In “They Were Her Property: White Women as Slave Owners in the American South,” historian Stephanie Jones-Rogers shows that white women had a deep economic investment in slavery and exercised extraordinary control over the enslaved people in their households. Many learned this practice from birth, receiving enslaved people as gifts when they were children or even infants. Women bought and sold people at auction, and successfully sued their male family members for control of their laborers. Women supervised plantations and brutally punished their human “property”: One mistress crushed the jaw of 8-year-old Henrietta King under the weight of her rocking chair because Henrietta had taken a piece of candy; the woman who enslaved Harriet Jacobs spit in the kettles and pans to keep her from eating leftover scraps.

Many Americans have internalized the idea that slavery ended shortly after the Civil War. A National Geographic educational guide, for example, marks Dec. 18, 1865 as the day the United States abolished slavery by adopting the 13th Amendment. Senate Majority Leader Mitch McConnell, R-Ky., recently arguing against reparations, called slavery “something that happened 150 years ago.”

But in effect, slavery continued into the 20th century, under a system known as convict leasing.This practice, in which private enterprises leased felony prisoners from the state for a fee, primarily targeted black men, women and youth. African-Americans were incarcerated for trivial offenses such as loitering, stealing farm animals, breaking into railroad cars, spitting on the sidewalk and vagrancy. Some were individually auctioned at county courthouses, while others were rented in groups. Convict leasing involved holding people against their will, separating them from their families, working them from sunup to sundown, beating and whipping them regularly, and severely punishing them for minor infractions. It also involved sexual violence against incarcerated women and, often, the permanent loss of freedom: Many leased prisoners were held for life, and mortality rates were high. In 1873 in Alabama, 25% of black leased convicts died.

Though convict leasing was legally abolished in 1928, at least 37 states still permit contracting prison labor out to private companies. Today, incarcerated workers manufacture military equipment and uniforms, build office furniture, fight fires, answer customer service calls and sow crops. Most receive pennies per hour for their labor, while others receive no compensation at all.

‘FIve Myths’ is a weekly feature from The Washington Post.