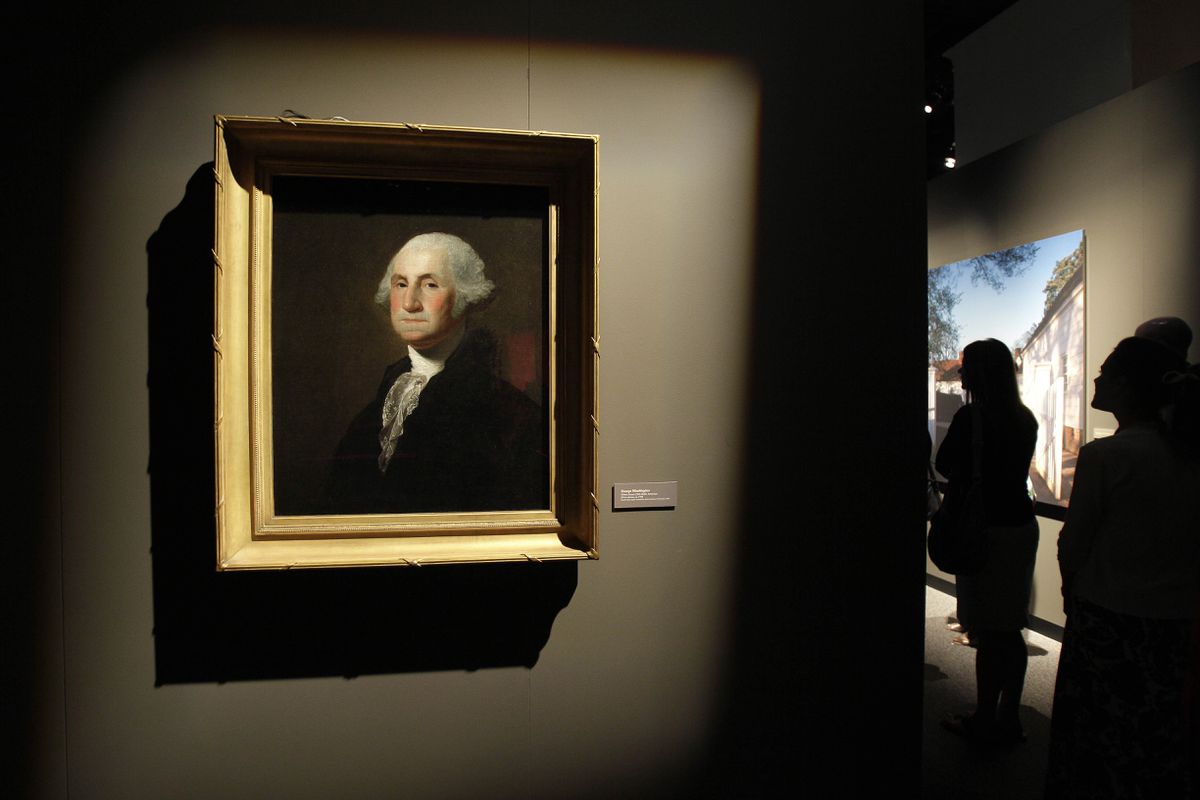 A portrait of George Washington by Gilbert Stuart is seen in the "Discover the Real George Washington: New Views from Mount Vernon," exhibit at the N.C. Museum of History in Raleigh, N.C. (AP Photo/Gerry Broome)

A portrait of George Washington by Gilbert Stuart is seen in the "Discover the Real George Washington: New Views from Mount Vernon," exhibit at the N.C. Museum of History in Raleigh, N.C. (AP Photo/Gerry Broome)

Coe is the author of “You Never Forget Your First: A Biography of George Washington.” She hosts the podcasts “Presidents Are People Too!” and “No Man’s Land.”

During a 2019 visit to Mount Vernon, the historic home of George Washington, President Donald Trump reportedly said: “If he was smart, he would’ve put his name on it. You’ve got to put your name on stuff or no one remembers you.” Such self-importance would have pained the first president, who didn’t need ostentatious preening to become the namesake of the nation’s capital, a state, a university and countless other things. Nobody has forgotten him. We have, however, misremembered him - and the myths about him are as illuminating as they are false.

Myth No. 1: Washington was a great military leader.

Henry Lee eulogized Washington as "first in war," and today, he continues to be remembered for his martial feats. A 2012 book by a former West Point superintendent argued that he should be considered the country's "preeminent strategist," and a 2017 feature in the Military Times extolled "his military and tactical genius." "My inclinations are strongly bent to arms," Washington himself wrote in 1754 - before quitting the army four years later.

But while Lee said “first,” we shouldn’t take it to mean “best.” When Washington was 22 and fighting for the British, he committed a political misstep of global consequence in the wilds of the Ohio, where he was sent to investigate whether the French were building forts on land claimed by the crown. When his Indian guides told him that no fewer than 50 French soldiers were nearby, Washington decided to make the first move. His surprise attack left a diplomat dead, formally engaging the British and the French in a battle for American land and forcing their European allies to take sides. As Horace Walpole later wrote, “The volley fired by a young Virginian in the backwoods of America set the world on fire.”

Decades after leaving the military, Washington showed up to the Continental Congress not in a gentleman's suit but in uniform. His comrades, getting the message, named him commander in chief of the Continental Army. He never claimed to be a military genius, or even the best man for the job, but played catch-up as fast as he could, reading as many books as possible. In the end, he lost more battles than he won. To be fair, Washington was more than just a general: He was a spymaster, overseeing the Culper Ring out of Long Island, among others; he also understood the power of propaganda and sought out stories about British atrocities to publicize. In the end, though, his greatest military gift was sticking with it: The British kept changing generals, while Washington saw the war through.

Myth No. 2: Washington wore a wig.

With few exceptions, Washington appears in portraits with a neat white plait - including in the full-length Gilbert Stuart painting that almost went up in flames when the British burned the White House in 1814 - and viewers often assume that his coiffure was as false as his teeth. "Sam Donaldson makes fun of George Washington's wooden teeth but completely ignores the obvious fact that he's wearing a wig," President Bill Clinton joked at the 1997 White House Correspondents' Association dinner, in a bit about modern journalists covering past presidents. In an article highlighting the youth of the Founding Fathers, Reader's Digest warned, "Don't let the powdered wigs fool you."

In fact, Washington’s long, full hair was entirely natural. A wig, which he could have just plopped on his head in the morning and taken off at night, would have been much easier to maintain than his labor-intensive hairdo - not that he did it himself. Washington had enslaved workers who tended to his personal needs, including the task of gathering, fluffing, curling and powdering his hair white. What was his natural hair color? Later in life, he went gray, but the portraits painted in his youth are quite clear: Washington was a redhead.

Myth No. 3: He felled his father’s cherry tree.

When the Father of His Country was young, the story goes, he got a little too excited about a new hatchet. When his father confronted him about hacking away at the family's beloved cherry tree, Washington supposedly confessed on the spot, proclaiming, "I cannot tell a lie." The confession was emblazoned on popular engravings and portraits from the time, and it frequently appears in books for young readers, including Edward Eggleston's 1895 "Stories of Great Americans for Little Americans" and the 2012 book "George Washington's Birthday."

The tale of Washington's arborcide is not only made up; we also know who conjured it. Mason Locke Weems, a broke itinerant parson and bookseller, concocted it for his 19th-century book "The Life of Washington." It appears alongside many other apocryphal stories that Weems promised his publisher would "sell like flax seed."They did. With each new edition, the story spread, transforming Washington from a man into the embodiment of the country at its best, most noble and public-spirited. America, then an infant nation eager to establish its own morals and values, embraced it, and today it remains the only story most people know about Washington's childhood.

Myth No. 4: Washington emancipated his slaves in his will.

Washington is often depicted as a man who, over decades, had a change of heart when it came to slavery. The website of Mount Vernon, now a museum and presidential library,praises Washington for making "the decision to free all his slaves in his 1799 will - the only slaveholding Founding Father to do so." A Seattle Times review of Ron Chernow's biography of Washington says that "Washington's attitudes began to change when he witnessed the bravery of black soldiers in the Continental Army."

Washington did reluctantly allow a small number of black soldiers to fight for his army, but it was the white men he met during the revolution who influenced his final act. The Marquis de Lafayette, for example, often wrote him letters proposing different ways he could free his slaves. As far as Washington's will, one thing is clear: The only enslaved person freed outright was Billy Lee, his valet. The rest of the people he enslaved - 123 men, women and children - had to wait for Martha to die or for her to set them free during her lifetime. According to Abigail Adams, Martha was moved to do so a year later, because she feared they would try to kill her. When she died soon after, the slaves she owned in her own right, who had married her late husband's and started their own families, were cruelly ripped apart; her grandchildren inherited them. Many never saw each other again.

Other slave-owning founders, including Benjamin Franklin, didn’t emancipate their slaves in their wills because they had done so while they were alive. Franklin also petitioned Congress to abolish slavery. Meanwhile Washington, who was in office at the time, signed the Fugitive Slave Act of 1793 into law. And as Erica Armstrong Dunbar shows in “Never Caught,” he pursued his own runaway slaves almost until his death.

Myth No. 5: Washington’s mother was illiterate and unloving.

Like her son, Mary Washington has often been rendered as a usefully one-dimensional caricature. In the early 19th century, a young nation obsessed with good patriots made her a kind of saint: Andrew Jackson laid the cornerstone of a monument dedicated to her. After the Civil War, however, historians turned on Mary. Shelby Little, in 1929, claimed that she was “illiterate,” a description echoed by Chernow, despite the fact that her letters and books survive.In “Washington: A Life,” he further accuses her of having “little that savored of maternal warmth” and calls her “crude.” James Flexner went so far as to call her a “termagant.”

That's strange, considering how devastated she was to miss a surprise visit by her son during the revolution - and that she said so in a letter to him. "I am afraid I Never Shall have that pleasure again," she wrote, before signing, "Loveing & affectionat Mother." (Mary stuck to the Bible and books about it, and her letters reflect that: Her vocabulary was limited, her prose artless. We have no idea how she spoke off the page.)

Five Myths is a weekly feature from The Washington Post.