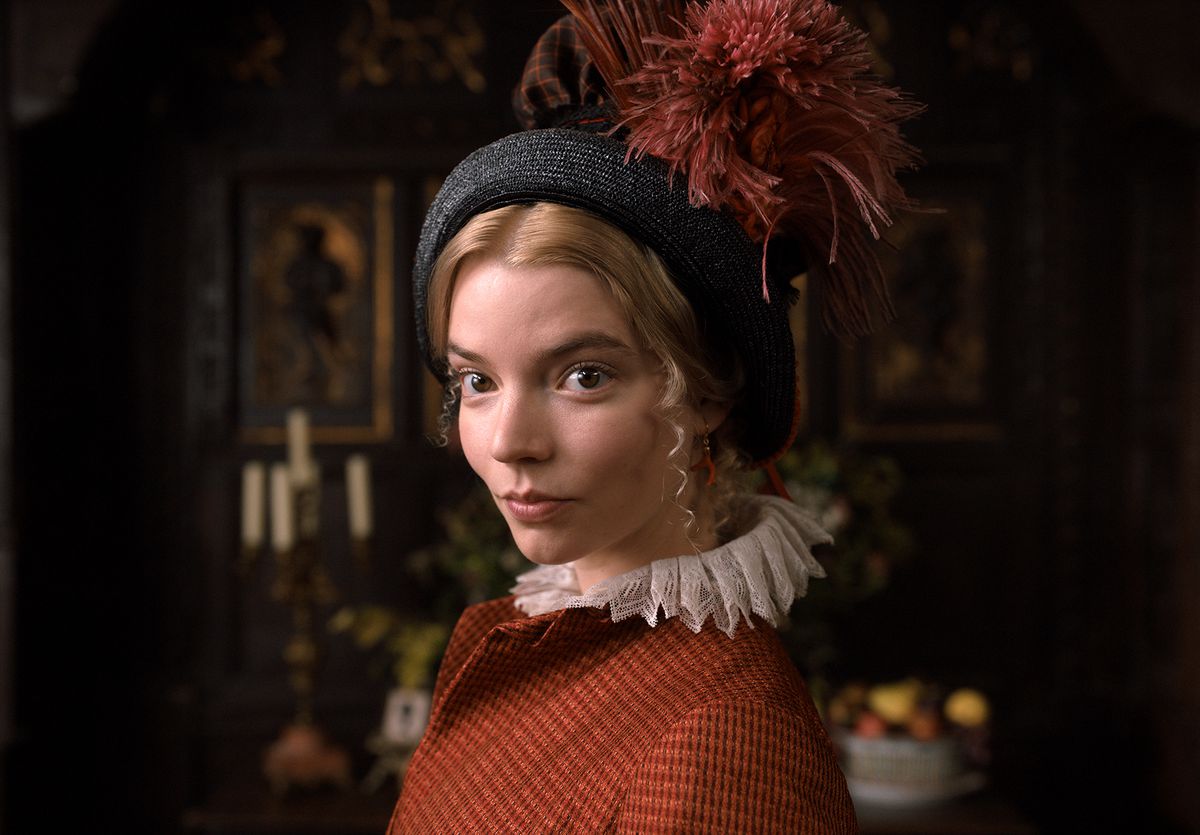 It is a truth universally acknowledged that somewhere a new novel, biography, play, series or film inspired by Jane Austen (1775-1817) must be in want of readers and viewers. Thanks to the PBS Masterpiece series “Sanditon” and Autumn de Wilde’s new film, “Emma,” Austen is again proving a hot screen commodity.

Yet the author best known for "Pride and Prejudice" (1813) and "Sense and Sensibility" (1811) has had her share of troubles, too. She might also be said to prompt fables and fabrication, lore and lies, and misconceptions and mendacity. Some myths about her have circulated for more than a century.

Myth No. 1: Jane Austen was a secluded, boring homebody.

The myth of her sheltered existence originated with her brother Henry's short biographical notice, published as a preface to the first edition of "Northanger Abbey"and "Persuasion" (1818). There Henry describes his late sister as having lived "not by any means a life of event." Today, it has become a trope. "Jane Austen lived a quiet and obscure life," declares the Catholic Weekly, in an argument that's also found a comfortable lodging in outlets like the New York Times and the Atlantic. The word "quiet" is so regularly used to describe Austen's upbringing that it's eerie.

But things happened to her! For one thing, she had seven siblings. Her father ran a small boarding school for boys out of the family's home. How quiet a girlhood could that have been? Then she lived for several years in the resort town of Bath, the Regency-era young person's equivalent of Cancun. She visited London and frequented its rowdy theaters, where vendors sold audience members rotten fruit specifically for the purpose of hurling it at the actors.

Her family had colorful characters. Her aunt was arrested, tried and acquitted of a shoplifting charge, creating a scandal. Her flirtatious cousin Eliza, whose first husband was guillotined in the French Revolution, afterward married Jane's biographer-brother, Henry. He became a failed banker whose losses cost his relatives tens of thousands of pounds. He lost some of Jane's money, too.

Henry Austen's biographical notice claims that Jane was "fearful of giving offense to God." Novelist Charlotte Brontë cemented Henry's prim and proper vision, complaining in 1850 that "the Passions are perfectly unknown" to the late Austen. (It may be an unfair charge from an author who transforms attempted bigamists into heroes and makes lovers out of violent boors, but I digress.) That opinion persists to this day, with the Guardian speculating that Austen is a model of "sexless greatness" whose own chastity gave us her "wonderful novels."

No matter how you define passion, you'll find plenty of illicit sex in Austen's fiction, including seductions, adultery, out-of-wedlock pregnancy and prostitution. "Pride and Prejudice" includes a flirt who runs off with a rake who's later bribed into marrying her. "Sense and Sensibility" describes a young woman who is seduced, abandoned and pregnant and whose mother had been an abused wife, a kept mistress, and then sunk deeper still. And obviously, any author who could create a Mr. Darcy - a man who "drew the attention of the room" by his fine, tall person and handsome features, and who's been interpreted as a tasty dish by almost a century of actors, from Colin Keith-Johnston to Colin Firth - must understand the power of sex appeal. Critic Jillian Heydt-Stevenson's book lays bare Austen's bawdy humor, such as Mary Crawford's joke in "Mansfield Park" about Rears and Vices, which may refer to types of admirals but which she protests is not a pun. Even Austen's private letters include some choice moments. She once humorously boasted of having been able to spot an adulteress across the room at a ball, even before the woman was pointed out to her.

Myth No. 3: Austen approved of slavery and colonialism.

Did Austen's novels have "racist subtext," as a Salon headline claims? Was she proslavery and an apologist for colonialism, as the cultural critic Edward Said famously argued? These claims often come down to what she leaves unsaid, as it does for Said who argues that her characters' pointed silences when colonialism comes up point to the author's elitist neglect. Austen certainly benefited from the cultural and economic privileges of her race and class, so it's complicated.

But if the alt-right has found things to appreciate in Austen, it's not because her fiction touts exclusion and racial hatred. Anti-slavery commentary appears in "Emma," when elegant Jane Fairfax decries the dehumanizing slave trade and governess trade, comparing the sale of human flesh to that of human intellect. It's also been argued that the title of "Mansfield Park" intentionally echoes the name of Lord Mansfield, the judge whose 1772 ruling said chattel slavery was unsupported by English common law. (Britain outlawed the slave trade in 1807, though slavery in its colonies continued until 1833.)

Austen herself isn't known to have had direct ties to the abolition movement, but her naval brother Francis expressed abolitionist views. In 1807, he wrote in his journal, "Slavery however much it may be modified is still slavery, and it is much to be regretted that any trace of it should be found to exist in countries dependent on England, or colonized by her subjects." The Austen family probably shared his opinion.

Myth No. 4: Austen’s work wasn’t noticed before she died.

Austen's "books were not known during her own lifetime," according to the Independent. And Country Living tells its readers that "no one knew she wrote her books until after her death."

This myth mistakes anonymous publication for total obscurity and turns moderate popular and critical success into literary disregard. Austen published "Sense and Sensibility" (1811) with the anonymous credit "By a Lady." She published her next books "by the author of 'Sense and Sensibility' " and "by the author of 'Pride and Prejudice.' " It allowed readers to follow her from one work to the next. Her novels went into multiple editions and attracted positive reviews.

The most famous was of "Emma," in the prestigious Quarterly Review. The anonymous reviewer, best-selling novelist Sir Walter Scott, claimed that the book's author was "already known to the public by the two novels announced in her title-page," "Pride and Prejudice &c. &c." He declares that the author of "Emma" creates sketches of "spirit and originality" about common occurrences. "In this class," he says, "she stands almost alone."

Scott may not yet have known this admired author's name, but others got wind of it. By 1815, the Prince Regent, a fan of her novels, knew Austen's name with sufficient certainty that he invited (read: commanded) her to dedicate her next book to him.

Myth No. 5: Austen-inspired fan fiction emerged in the 20th century.

Works of JAFF (Jane Austen fan fiction) - or Austenesque fiction, as some call it - have exploded in the past decade, and not just ones that involve zombies. From "Spank Me, Mr. Darcy" (2013) to "Sense and Sensibility and Sea Monsters" (2009) to "Emma, Mr. Knightley, and Chili-slaw Dogs" (2013), there seems to be an Austen-inspired story to suit every taste. The Guardian claims that Sybil Brinton's 1913 "Old Friends and New Fancies," which imagines Elizabeth Darcy, Elinor Ferrars and Anne Wentworth as chums, was the first work of Austen-inspired fan fiction. That claim has been repeated by the Atlantic and many others over the years.

But Austen-inspired fan fiction dates back a century earlier. A piece of real-person fiction, using Austen as a character, appeared in the Lady's Magazine in 1823. It imagines Austen as a ghost, says she had a nose that expressed her genius and describes what she wore in life. Perhaps this piece of fiction was so long overlooked because critics wrongly believed that Austen was unread in the 1820s.

The notion that Austen was a little-known or unknown author, who first experienced mass popularity and attracted fans in 1870, then recaptured the popular imagination in 1995, just isn’t true. The time is right for the heart-rending, oft-repeated mythical story of Austen’s having died unrecognized, and then going so long without fans, to reach its “finis.”