This is why Colin Kaepernick took a knee 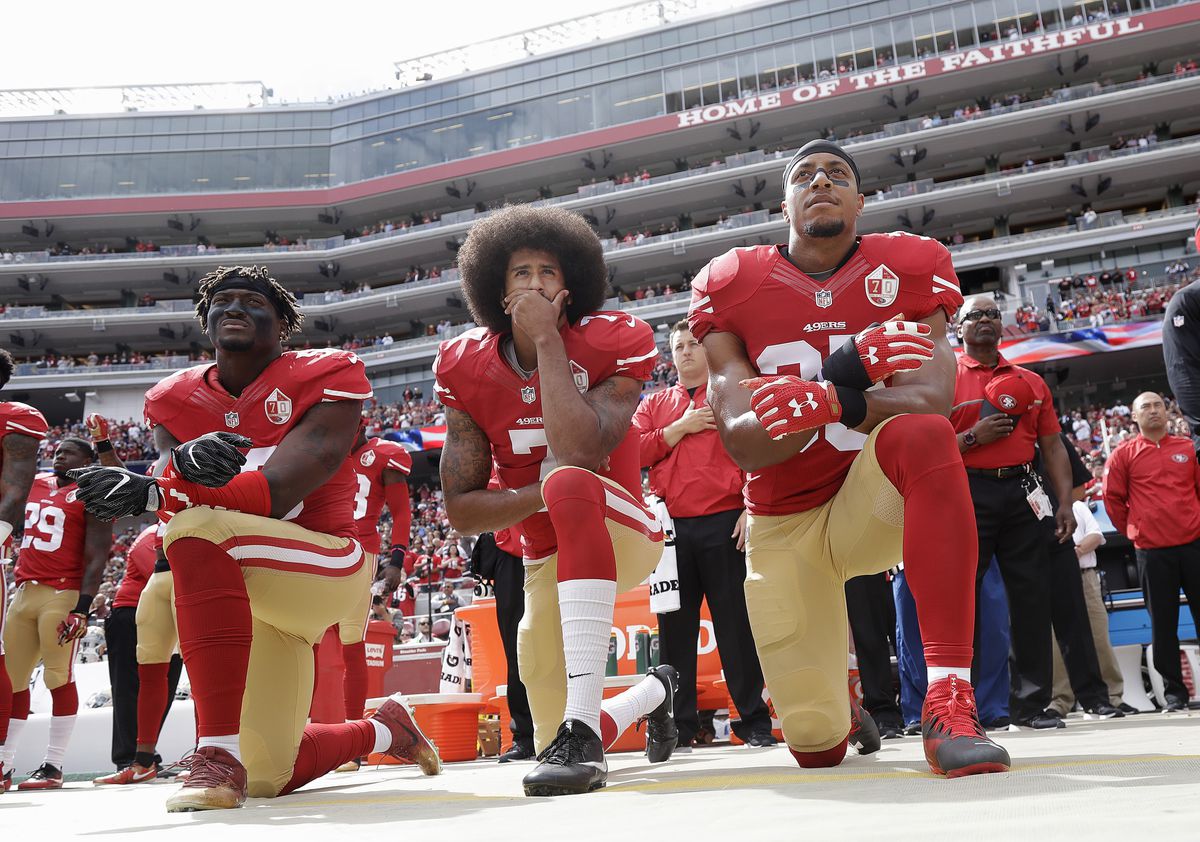 Two knees. One protesting in the grass, one pressing on the back of a man’s neck. Choose. You have to choose which knee you will defend. There are no half choices, there is no room for indifference. There is only the knee of protest, or the knee on the neck.

NFL owners chose the knee on the neck. They did. They may rationalize it as controversy avoidance, or respect for the flag, or audience mollification, or economic strategy, or business exigency. But when they collectively ostracized Colin Kaepernick for his protests against police brutality on unarmed black citizens, they chose the wrong knee. They chose the knee on the neck, the knee that pressures, stifles, gags, chokes and silences.

Kaepernick is still so present in the American consciousness that he might as well be playing in the league. Oh, the owners thought they made him disappear with a settlement. But the image of the kneeling, bow-headed Kaepernick becomes newly indicting each time someone is pinned down by a brute in a blue uniform and dies pleading in a street. The owners misidentified the problem, you see. The problem they can't get rid of isn't Kaepernick, or his knee. It's themselves. Their own denial, that's what dogs them.

The result of indifference, evasion, and avoidance, of stoppered ears and shaded eyes, is not benign. It leaves people defenseless. Anyone who isn't against this drumbeat of unredressed wrong is exposed as guilty abettors. Former NFL player Desmond Marrow was body-slammed to the ground and choked by a Georgia cop, though he was already in handcuffs, over a simple roadside argument. "I thought I was going to die," he said. Tennis star James Blake was tackled and cuffed on a New York City sidewalk simply because his skin color met a criminal description. Jaylan Butler, the only black member of the Eastern Illinois University swim team, had a police gun put to his forehead for wandering too far from a team bus. Matthias Askew, a retired NFL defensive lineman, was plied with a stun gun four times in front of his 7-year-old daughter simply for parking his car in an illegal spot.

A recent study out of Stanford shows that black drivers are 20% more likely to get pulled over than whites.

How is this not the NFL's problem? Seventy-five percent of the league players are black.

How are Ahmaud Arbery, Breonna Taylor, and George Floyd not the NFL's problem too?

Kaepernick was treated as un-American and radical simply for begging the question, isn't this lethal racism every American's problem? Aren't we letting down our flag by not fulfilling its promise? Instead of defending him, most NFL owners stood by and quailed or in some cases projected tacit acceptance as Donald Trump called him a "son of a b----." And suggested any player who took a knee be thrown out of the country. It was the ugly political version of a chokehold. Oh, the owners protested the "divisive" language. They issued statements. But where was their full-throated resistance to such an obvious, aggressive, bullying wrong?

All those who vilified Kaepernick, where is the same demand for banishment, the same level of ugly feeling, the same red-faced, foaming sense of injury over the insult to America in that video of Floyd's death, three white cops with all of their weight on his burdened back, grinding him into that pavement?

"I haven't seen the same OUTRAGE from people of influence when the conversation turns to Ahmaud Arbery, Breonna Taylor and most recently George Floyd," Miami Dolphins coach Brian Flores said in a statement. "Many people who broadcast their opinions on kneeling or on the hiring of minorities don't seem to have an opinion on the recent murders of these young black men and women. I think many of them QUIETLY say that watching George Floyd plead for help is one of the more horrible things they have seen, but it's said amongst themselves where no one can hear. Broadcasting THAT opinion clearly is not important enough."

You know what else isn't important enough to NFL owners? Curing their abidingly racist hiring practices. There are surely some fine individuals among NFL owners whose hearts burn on the issue of race - the Atlanta Falcons' Arthur Blank instantly comes to mind - but collectively they act with such lazy consciences that they need "incentives" to address the fundamental disparity of just three minority head coaches out of 32.

The truth about Kaepernick is that he's not a radical or a SOB. He's a reformer, in the great American tradition. As Frederick Douglass said of reformers, "They see what ought to be by the reflection of what is, and endeavor to remove the contradiction." The NFL might have been proud of that. But they weren't.

You cannot seal off murderous racial injustice in American life, partition it, any more than you can restrict a defective murmur to a single chamber of your own heart. "Do not blink it out of sight," the great abolitionist Senator Charles Sumner warned of racial violence at the end of the Civil War. "Approach it. Contemplate it. Study it. Deal with it." Too many of us have tried to blink it out of sight, and NFL owners more than most. Time and again they have placed race into a separate compartment, tried to soundproof it like their glass-paneled limos, gate it like their subdivisions, and say, "This isn't our problem, it has nothing to do with the game, and don't make it the problem of our audience, either."

Colin Kaepernick’s real offense was to open the box and hold up what is in front of the audience, instead of the triumphalist self-congratulatory image they wanted. The league owners had a chance, with Kaepernick, to be more than hucksters guarding their brands and bottom line. They might have been tremendous influencers on the problem of injustice in this burning moment. They might have been real allies of, and advocates for, their great players. They might have been examples of true, righteous Americanism. They might have been bonders rather than dividers, healers of mistrust. But who would ever buy that now? They missed their chance. They chose the wrong knee. It was a terrible choice. One that may even make you weep.