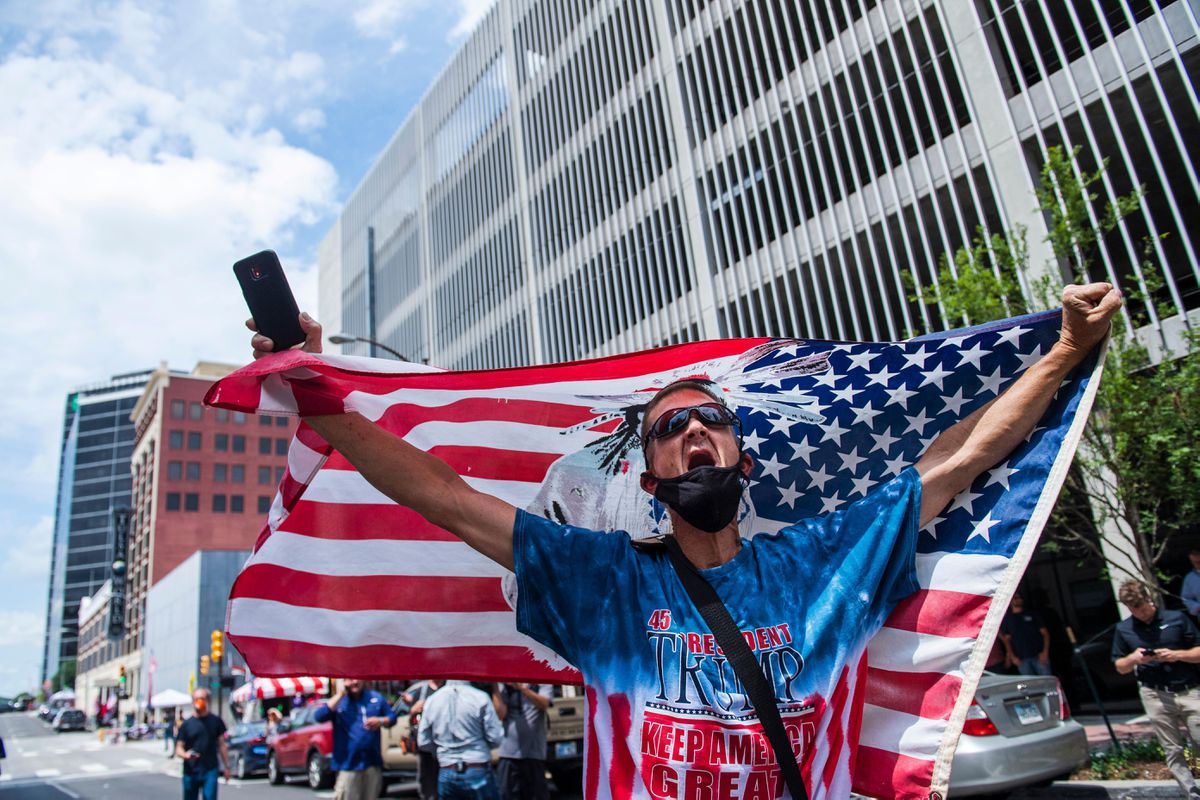 A Trump supporter engages with counter-protesters near the entrance of the BOK Center on Saturday afternoon in Tulsa, Okla. Photo by Amanda Voisard for The Washington Post

A Trump supporter engages with counter-protesters near the entrance of the BOK Center on Saturday afternoon in Tulsa, Okla. Photo by Amanda Voisard for The Washington Post

Suzanne Nossel is the chief executive of PEN America and the author of “Dare to Speak: Defending Free Speech for All.”

Free speech rights are under fire. Police lob rubber bullets and tear gas at protesters. The Trump administration and Congress are moving to hold Internet companies liable for user content.Court battles rage over the publication of books criticizing the president. Individuals are shunned or forced out of their jobs for racist social media posts. While many people know that free speech is enshrined in the First Amendment, there’s a lot about it that many still misunderstand.

Myth No. 1: Speech cannot cause harm by itself.

The schoolyard chant "Sticks and stones may break my bones but names can never hurt me" reflects an ingrained belief that words do not inflict lasting harm. In "The Coddling of the American Mind," Jonathan Haidt and Greg Lukianoff dispute the notion that speech can "trigger" students or make them feel "unsafe." The head of a leading British girls school recently dismissed, in the Sunday Times, students concerned about objectionable speech as "victims of a mad health and safety culture that has made them unable to deal with anything difficult."

While they are categorically different from bodily harms, the hazards of speech are real; words can inflict genuine and lasting wounds. Online speech, including harassment and cyberbullying, can drive individuals to self-harm or suicide. Microaggressions - fleeting, often unintentional insults or slurs based on race, ethnicity, gender or religion - can, over time, have effects similar to those of serious trauma. Speech should not be equated with physical violence, but at its most extreme, hateful speech can be an instigating prelude to violence, riling people up to commit crimes.

With rising incidences of hate-motivated crimes in the United States and hateful speech proliferating online, there are increasing calls for the government to tamp down on bigoted expression. In a Washington Post op-ed, Richard Stengel pushed for state governments to adopt hate speech statutes to "curb the incitement of racial and religious hatred." Critical race theorists have long argued that reinterpreting the First Amendment to allow for more robust regulation of hateful speech would help ensure a more tolerant and equal society.

But recent history indicates that such legal prohibitions are ineffective in stamping out bigotry. In the United States,Holocaust denial and anti-Semitic vitriol, among other categories of hateful expression, are protected speech; Germany bans such sentiments. The Anti-Defamation League reported a disturbing 12 percent rise in anti-Semitic hate crimes in the United States from 2018 to 2019, and Germany's Interior Ministry recorded an almost identical jump of 13 percent in the same time frame. Meanwhile, the European Union's efforts to expunge hateful speech from online platforms have driven its purveyors underground, to shadowy niche sites and networks where they can recruit while shielded from the prying eyes of law enforcement.

There is also evidence that authorities can use hate speech laws not to silence prejudice but rather to suppress dissenting views, such as support for Palestinian rights or antiwar activism. At a moment when democratic governments - including in India, the Philippines and Hungary - are showing increasing hostility to dissent, expanding state leeway to suppress speech is risky.

Myth No. 3: The best remedy for disfavored speech is more speech.

The notion that the ideal antidote to menacing or harmful arguments is better arguments was set forth by Justice Louis Brandeis in his concurrence in the 1927 case Whitney v. California,where he argued that the best response to communist propaganda was "more speech, not enforced silence." More recently, in her 2018 book, "Hate: Why We Should Resist It With Free Speech, not Censorship," law professor Nadine Strossen made a forceful case that hateful and "extremist" speech is "most effectively 'undermined' by counterspeech."

Debate, rebuttals and denunciations are almost always preferable to government prohibitions on offending speech. But the Internet age has demonstrated that fighting speech with speech has its own perils. Research shows that efforts to refute conspiracy theories and disinformation can end up amplifying the original falsehoods. In other instances, counterspeech can itself veer into hatred, or incur such high costs that it mutes speakers: When, in 2014,women criticized sexism in the video-game industry, the avalanche of hostile and menacing retorts, including threats of physical harm, forced some to flee their homes and intimidated others into silence. Offline, demonstrations that drown out a speaker become a heckler's veto, depriving audiences of a chance to listen - and sometimes prompting authorities to shut down the exchange for fear of a melee.

Myth No. 4: We all enjoy the same speech rights.

The combination of the First Amendment's protections for free speech and the 14th Amendment's guarantee of equal protection under law would seem to ensure that, in the United States, everyone's speech is equivalently free and safeguarded. The Universal Declaration of Human Rights makes this explicit, guaranteeing that "everyone shall have the right to freedom of expression; this right shall include freedom to seek, receive and impart information and ideas of all kinds." In a series of decisions fortifying the speech rights of corporations, the Supreme Court has "repeatedly assured the nation that the First Amendment protects everyone, regardless of popularity and regardless of viewpoint," Garret Epps wrote in the Atlantic in 2019.

While universal and equal free speech rights may be an ideal to which we aspire, the reality is different. Socioeconomic status, race, gender identity, ideological proclivities and other factors shape whether individuals have the means to express themselves. Creative industries including journalism, book publishing and filmmaking are rife with disparities in terms of who gets the opportunity to create and share their work, and how much they are paid to so do.

Despite the First Amendment's legal protections, social norms and taboos dictate the parameters of acceptable discourse, and can shunt unorthodox views out of the public sphere. After Wanna Thompson tweeted criticism of rapper Nicki Minaj in 2018, fans barraged the culture writer with hateful messages over Instagram, email and the phone; Thompson ultimately lost a writing job. This spring, University of Chicago economist Harald Uhlig was subject to calls for removal from his role as a journal editor, after he compared advocates of defunding the police to flat earthers. Social barriers and ideological deterrents shape the landscape for speech, so that liberties that may be equal in theory may be difficult to exercise in practice.

Myth No. 5: Social media restrictions are forms of censorship.

When social media companies demote or delete posts or disable accounts that violate their usage rules, those targeted and their allies, including President Trump, are often quick to cry censorship. Right-wing commentators are urging a shift from Twitter to Parler to escape what they call censorship. Aggressive content-moderation efforts aimed to stanch the spread of conspiracy theories and quackery amid the coronavirus pandemic have sparked accusations that social media platforms are engaging in Orwellian tactics of information suppression.

But Twitter, Facebook and other online platforms are private companies, which have their own free speech rights - including the right to elevate or take down content as they see fit. Courts have not adopted arguments that private businesses should be subject to the speech-protective constraints that prevent the government from suppressing viewpoints. The major platforms all have community standards and guidelines that allow for far more aggressive policing of speech - including disinformation about voting, impostor profiles and the glorification of self-harm - than the government could constitutionally carry out.

This does not mean people have no recourse if they believe that an online platform is muzzling a particular viewpoint. Consumers and clients are free to put pressure on the platforms and to stop using services that they think are overly restrictive.