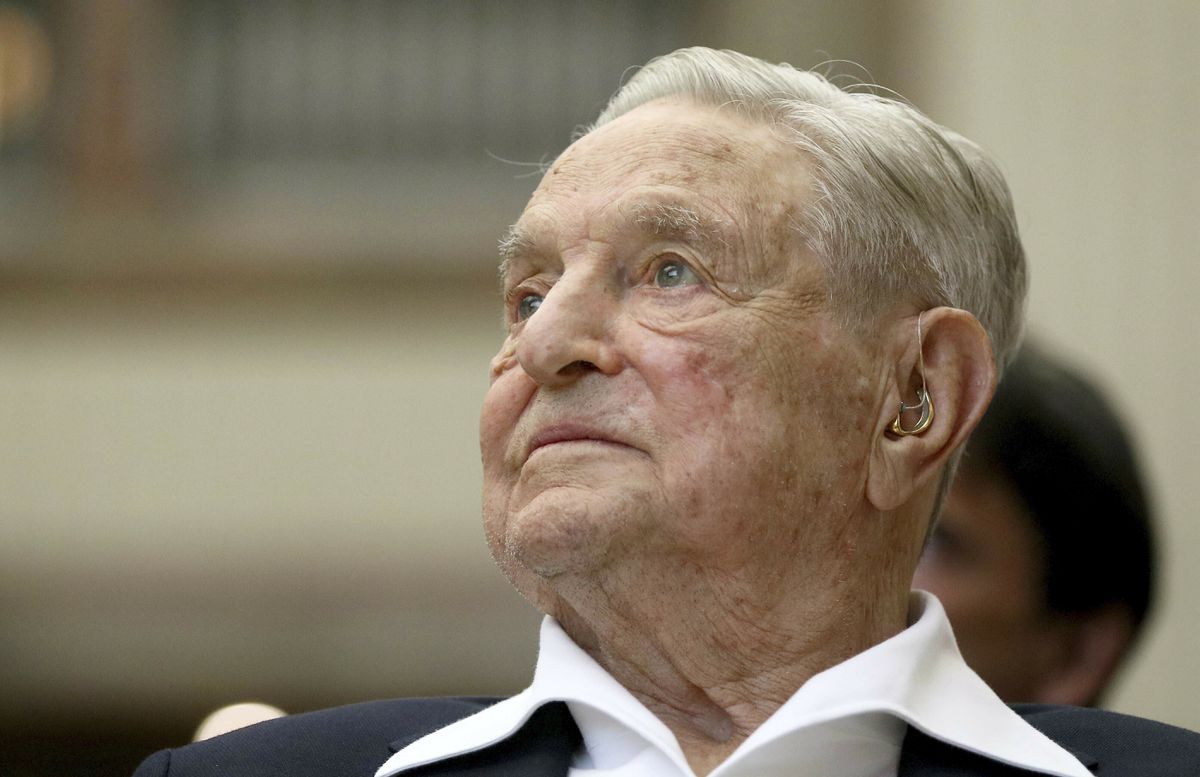 Emily Tamkin is the U.S. editor at the New Statesman and the author of “The Influence of Soros.”

George Soros, who turns 90 on Wednesday, is arguably the world’s most famous boogeyman. He’s one of the great hedge fund managers and is arguably the most successful currency speculator in history; he is a major political donor; and he has given billions to his charity, the Open Society Foundations, dedicated to ensuring that all people are empowered and able to participate in their communities and countries. But much of that real influence is buried beneath persistent conspiracy theories.

This is the ugliest conspiracy theory about Soros. In a "60 Minutes" segment in 1998, the interviewer, Steve Kroft, said that Soros's survival during the Holocaust "carried a heavy price tag" and that "as hundreds of thousands of Jews were being shipped off to the Nazi death camps, a 13-year-old George Soros accompanied his phony godfather on his rounds, confiscating property from the Jews." In June, social media users circulated a photo of a young man in a Nazi uniform and claimed it was a picture of Soros. Other fans of this conspiracy theory include comedian Rosanne Barr, who tweeted in 2018 that Soros was a Nazi who had turned in fellow Jews to be murdered.

In actuality Soros, whose father, Tivadar, had previously changed the family’s last name from Schwartz to Soros so as to be less obviously Jewish in an increasingly anti-Semitic Budapest, disguised himself as a Christian during the Second World War. His father procured identity papers for his own family and others. At one point, the man with whom young Soros was hiding out did bring him along when he went to take inventory of a Jewish person’s house, but Soros was not involved in the confiscation of Jewish goods. Likewise, while Soros was, as a student, sent to run errands at the Judenrat, a council of Jews whom the Nazis forced to do their bidding, he did not round up Jewish people. In fact, per Soros’s recollection, when he was given a list of names, with instructions to tell them to report to a location from which they would be deported, his father said he should not tell them to go.

Soros was accused of paying protesters who spoke out in 2017 against corruption in Romania. In 2018, Turkish President Recep Tayyip Erdogan said Soros was supporting activist Osman Kavala, whom the president blamed for the 2013 Gezi Park protests: “He has so much money and he spends it this way,” Erdogan said. That same year, President Trump alleged that Soros had paid for the posters used in protests against the confirmation of Brett M. Kavanaugh to the Supreme Court. Just Wednesday, Trump asserted in an interview that people say Soros and others are financing antifa, or anti-fascist, protesters.

Open Society does support anti-corruption organizations across Central and Eastern Europe, and it did back a group with which some of the Kavanaugh protesters were affiliated. More recently, Open Society announced a “$220 million investment” in groups working on racial justice.

But there is a difference between "George Soros pays for and orchestrates protests" and "George Soros's philanthropic foundation supports groups that employ people who are part of protests." There are, surely, people around the world who show up at protests and who work for organizations that receive grants from Open Society, but they are not being paid to protest. To say they are attributes too much agency to Soros, playing on an anti-Semitic trope of Jewish people pulling society's strings, and strips demonstrators who are taking to the streets with legitimate grievances - like corruption and police brutality - of theirs.

"I'm more of a Jew than Soros is . . . He doesn't support Israel, he's an enemy of Israel," Rudolph W. Giuliani, who is not Jewish, said in 2019. When I interviewed Hungarian government spokesman Zoltán Kovács for my book on Soros, he said that Hungarians think of Soros not as a Jewish person but as a globalist. "Just look at his attitude, his relationship with Israel," Kovacs told me.

In his 1991 book, Soros wrote: "My Jewishness did not express itself in a sense of tribal loyalty that would have led me to support Israel. On the contrary, I took pride in being in the minority, an outsider who was capable of seeing the other point of view." His philanthropic support has therefore not focused on Jewish people specifically or on Israel, and in fact has often gone to groups, like Human Rights Watch, that are critical of Israel's human rights record and treatment of Palestinians.

But that isn't to say Soros is somehow not Jewish. "I was facing extermination at the age of 14 because I was Jewish," as he once put it. "Wouldn't that make an impression on you?" Soros has referred over the years to his "Jewishness" and spoken about what his Jewish identity means to him. If he considers being Jewish to be a matter of ancestry and culture, and not of religion, then he has that in common with 62 percent of Jewish Americans, according to a 2013 Pew study.

Myth No. 4: Soros single-handedly broke the Bank of England.

The exact role that Soros played in “breaking the Bank of England” has been debated for almost 30 years. Nevertheless, the idea that he was solely responsible for the notorious 1992 incident — in which Soros’s Quantum Fund shorted the British pound, resulting in Britain leaving the European Exchange Rate Mechanism — and “broke” a central bank has been uncritically repeated by outlets including Forbes and Investopedia.

In truth, Britain's position within the ERM - a kind of precursor to the euro, in which each currency could become only so strong or so weak - was, because of the British and German economic conditions during the two years that Britain was in the band, essentially untenable. Soros and his colleagues knew that the pound could rise only so high, and therefore they could lose only so much by shorting it. If they were correct in their speculation, there was no telling how far the pound could fall.

They were right, and in the end, the British pound crashed out of the ERM. Soros was not the only speculator who bet against the pound, but his fund is the one that's estimated to have made a $1 billion profit. No bank was broken - some say "Black Wednesday" gave way to "White Wednesday," because Britain proceeded to get its economy in better shape - but Soros and his colleagues did play a major role in forcing the currency out of the ERM.

Myth No. 5: Soros is plotting a destructive revolution in America.

The Color Revolutions were a series of protests that led to new governments in Eastern Europe in the early 2000s. Soros has been accused by conspiracy theorists and fringe sites of being the motivating force behind revolutions abroad and even of trying to stage one in the United States. After Soros backed the election campaign of Philadelphia District Attorney Larry Krasner, Tucker Carlson said that Soros's support for progressive DA candidates is akin to "hijacking" and "remaking" American democracy. Earlier this year, the Washington Times ran an article under the headline, "George Soros, 89, is still on a quest to destroy America."

Soros is simply a large political donor who entered the fray in 2004, when he contributed $27 million to groups trying to oust President George W. Bush. He also has supported progressive district attorney candidates and is putting millions into defeating Trump. But there’s a difference between making political donations - something many rich people do - and plotting a revolution. According to the Center for Responsive Politics, Timothy Mellon, a great-grandson of the founder of Mellon Bank, is the third-largest individual political contributor of the 2020 cycle. The myth of the Mellon revolution, however, has somehow gone untold.