Five myths about the Postal Service 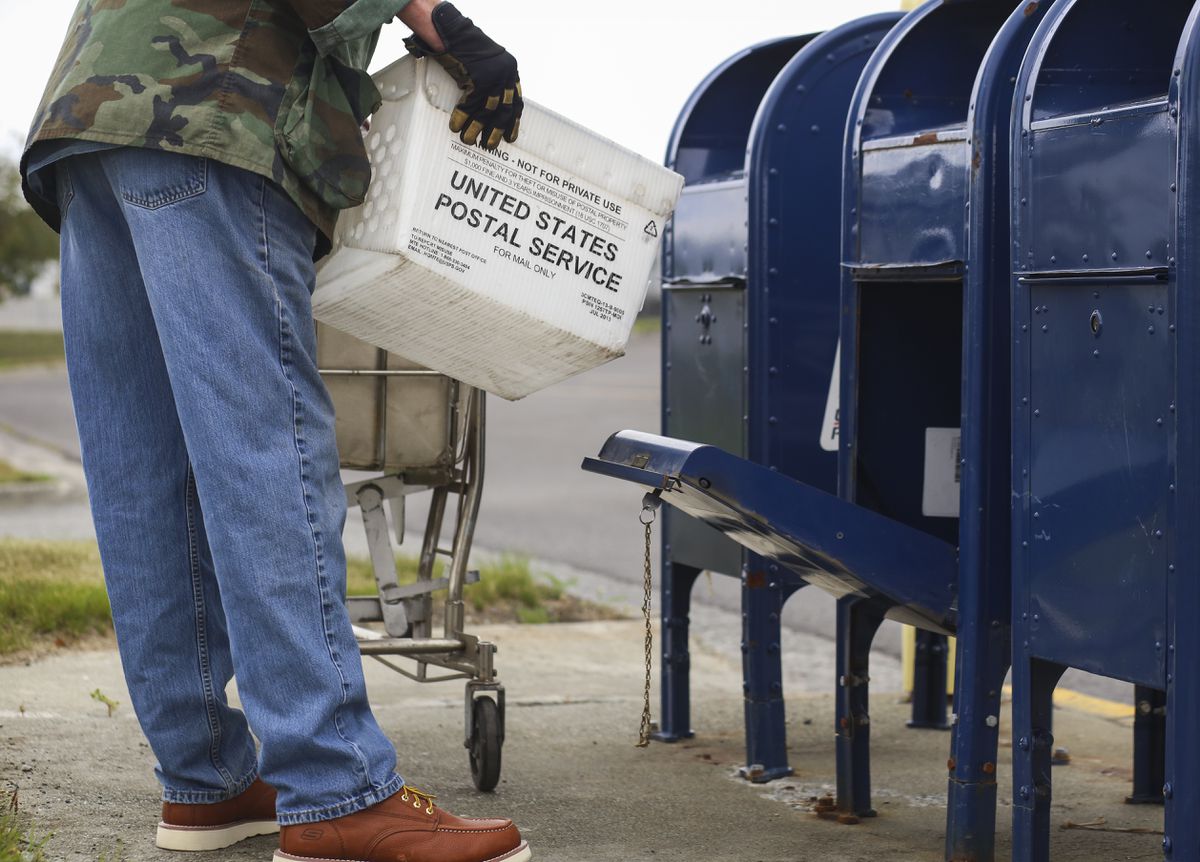 Richard R. John is a professor at the Columbia Journalism School and the author of “Spreading the News: The American Postal System from Franklin to Morse.”

The historic post office building across from New York’s Penn Station bears the inscription: “Neither snow nor rain nor heat nor gloom of night stays these couriers from the swift completion of their appointed rounds.”But that’s not the Postal Service’s official motto; it’s actually a reference to an ancient Persian messenger service remembered admiringly by Herodotus. Misconceptions about the post office abound, especially as more Americans demand access to mail-in voting for the presidential election.

“Benjamin Franklin creates the Post Office Department” reads a 2013 Philadelphia Inquirer headline on a today-in-history feature. In 2016, the Independent, a Rhode Island newspaper, referred to Franklin as “the father of America’s postal system.”

The Continental Congress made Franklin postmaster general in 1775, but he wasn’t the founder of the Postal Service as we know it today. He had been Philadelphia’s postmaster and America’s co-postmaster general under the British Crown, and in 1775 he inherited an existing organization that retained some of its colonial trappings. A rate chart that Franklin issued after he took office, for instance, was substantially similar to one he had issued under colonial rule.

In 1788, the ratified Constitution gave Congress the power "To establish Post Offices and post Roads." President George Washington sought a postal service that could logistically bind western territories with the Eastern Seaboard. In 1790, he urged Congress's "establishment of the militia, of a mint, of standards of weights and measures, of the post office and post roads."James Madison, then a congressman, wanted to ensure the flow of information from citizens to their representatives. The result was a postal organization with an expanded mandate, codified in the Post Office Act of 1792. With this law, Congress subsidized the circulation of information on public affairs, which at that time primarily meant delivery of newspapers. It also set protocols for the establishment of new postal routes: Ordinary Americans were empowered to petition lawmakers to extend mail service to their localities, fashioning the post office as we now conceive it.

Myth No. 2: Today’s financial crisis is an unprecedented disaster.

The USPS lost $3.9 billion in 2018, $8.8 billion in 2019 and $2.2 billion in a three-month stretch this year. Trump said recently, “This has been one of the disasters of the world, the way it’s been run.” The new postmaster general, Louis DeJoy, calls the situation “dire” and warns of an “impending liquidity crisis,” even as the president and congressional Republicans stall on emergency Postal Service funding. In April, a Boston Globe editorial carried the headline, “The postal service has never been more valuable — or more endangered.”

But the greatest fiscal crisis that the agency has ever confronted occurred in the 1840s, when its revenue plummeted as a result of head-on competition from private carriers in the high-volume market from Boston to Philadelphia. Hobbled by an antiquated rate structure and a rigid bidding process, postal administrators found it impossible to negotiate advantageous contracts with new railroads and steamships. Aghast at the possibility that sparsely populated regions of the country might lose access to low-cost mail delivery, Congress lowered the basic letter rate. In addition, it no longer pretended that the organization should cover its costs, which it failed to do in most years between 1851 and 1970.

Myth No. 3: The Postal Service is obsolete.

In 2011, the tech site Gizmodo ran a post titled "The Post Office Is Dying Because We Don't Need It Anymore." In a 2016 Vice story asking, "Why Is the Post Office Still a Thing?" Rachel Pick started with her impression that "it provides an important service. But demand for those services is ebbing in the digital age, and delivering paper mail almost daily seems like an excessive waste of fuel and paper." In the Internet era, regular mail has been derisively tagged as "snail mail."

It’s true that addressing an envelope or buying stamps is foreign to many, particularly younger Americans. But last year, the USPS handled almost 143 billion pieces of mail (more than half of which was junk mail) -almost half of all the mail delivered in the world.As Vox reported earlier this year, for communities with little access to broadband Internet, not enough residents to have a polling place or too remote for private delivery services, the Postal Service is a “lifeline.” Although one 2020 study found that “1 in 5 consumers has decreased their [bill] payments through the mail or in person,” over the past year 38.3 percent of consumers still “made a payment through the mail.”One reason for the outcry over recent postal delays is that Americans rely on the post office for delivery of 1.2 billion prescriptions each year, according to the National Association of Letter Carriers.

In an op-ed for the Hill last year, the R Street Institute's Kevin Kosar wrote that back in 2007, then-Postmaster General John Potter told Congress "that the business model of the agency was already broken." This month, the Wall Street Journal's editorial board argued that "lawmakers could give the USPS more freedom to act like a business: to raise prices if warranted; to close lonely, desolate post offices; to stop Saturday mail - or Wednesday mail if it comes to that."

But the post office isn't meant to be run as a business. A 1790 law, "An Ordinance For regulating the Post-Office of the United States of America,"stated that the "communication of intelligence with regularity and dispatch, from one part to another of these United States, is essentially requisite to the safety as well as the commercial interest thereof." The Postal Policy Act of 1958 states: "The postal establishment was created to unite more closely the American people, to promote the general welfare, and to advance the national economy," and though the post office "should be operated in an efficient manner, it clearly is not a business enterprise conducted for profit or for raising general funds." As journalist Winifred Gallagher explained, since Republican President Richard Nixon signed the 1970 Postal Reorganization Act, the USPS has functioned as a "government-business hybrid."

Myth No. 5: FedEx and UPS can replace the Postal Service.

Writing for Forbes in 2013, Doug Bandow concluded that “the only answer” to the Postal Service’s woes “is to turn mail delivery over to market competition.” In May, Gary MacDougal, who has served as a UPS director, argued that the Postal Service should be phased out and that “the combination of UPS, FedEx, DHL, Amazon and countless local delivery companies would pick up the slack left by the wind-down of the post office.” (Amazon chief executive Jeff Bezos owns The Washington Post.)

If all Americans were reliant on private carriers, some could be deprived of vital delivery services that those carriers deem insufficiently profitable: Unlike Japan or Britain — smaller nations with limited postal privatization — the United States spans several time zones and is, in many places, thinly settled. The post office provides “last mile” delivery in many areas likely too remote or too costly for FedEx.

Five Myths is a weekly opinion feature from the Washington Post.