The real threat to law and order is Trump himself 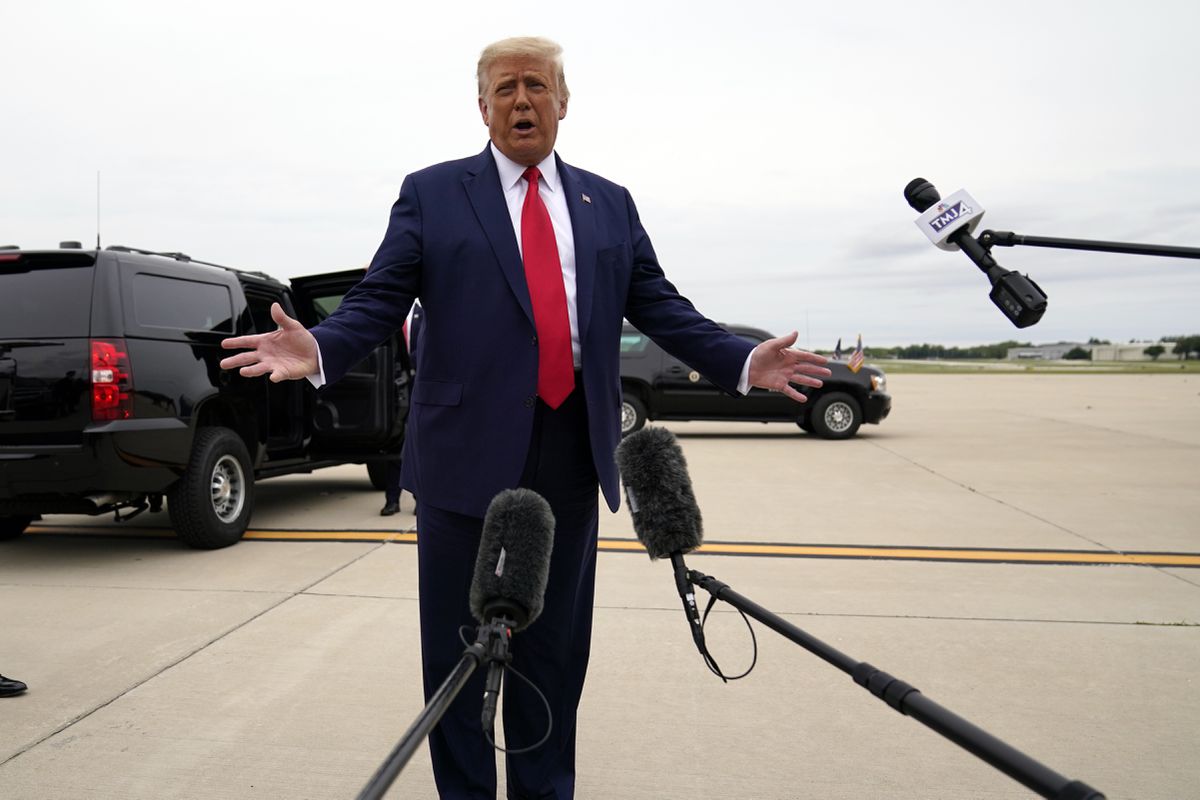 President Donald Trump talks to reporters as he arrives at Waukegan National Airport in Waukegan, Ill., on his way to visit Kenosha, Wis., Sept. 1, 2020, in Kenosha. (AP Photo/Evan Vucci)

President Donald Trump talks to reporters as he arrives at Waukegan National Airport in Waukegan, Ill., on his way to visit Kenosha, Wis., Sept. 1, 2020, in Kenosha. (AP Photo/Evan Vucci)

To be re-elected, Donald Trump knows he has to distract the nation from the pandemic that he has flagrantly failed to control — leaving more than 180,000 Americans already dead, tens of millions jobless and at least 30 million reportedly hungry.

So he’s counting on the reliable Republican dog whistle. “Your vote,” Trump said in his speech closing the Republican convention last Thursday night, “will decide whether we protect law-abiding Americans, or whether we give free rein to violent anarchists, agitators and criminals who threaten our citizens.”

“We will have law and order on the streets of this country,” Vice President Pence declared the previous evening, warning “you won’t be safe in Joe Biden’s America.”

Neither Trump nor Pence mentioned the real threats to law and order in America today, such as gun-toting agitators like Kyle Rittenhouse, a white 17-year-old who traveled to Kenosha, Wisconsin, last week during protests over the police shooting of a Black man, and then shot and killed two people and wounded a third.

Last Saturday night, a pro-Trump caravan that included members of the neo-fascist Proud Boys drove into Portland, Oregon, shooting protesters with pepper spray and driving into crowds. Someone wearing the hat of a far-right group called Patriot Prayer was shot dead.

Trump’s reaction? Rather than condemn the violence, he tweeted “GREAT PATRIOTS!” in support of the pro-Trump agitators, and, “The big backlash going on in Portland cannot be unexpected. ... The people of Portland won’t put up with no safety any longer.” Trump also retweeted a claim that “this coup attempt is led by a well funded network of anarchists trying to take down the President.”

For the first time in history, a United States president is openly justifying violence by some Americans against other Americans.

The threat to the nation’s law and order also comes from conspiracy theorists such as Marjorie Taylor Greene, the recently nominated Republican candidate for Georgia’s 14th congressional district and promoter of QAnon, whose adherents believe Trump is battling a cabal of “deep state” saboteurs who worship Satan and traffic children for sex. Trump has praised Greene as a “future Republican star,” and claimed that QAnon followers “love our country.”

The threat also comes from people such as Mary Ann Mendoza, a member of Trump’s campaign advisory board, who was scheduled to speak at the Republican convention until she retweeted an antisemitic rant about a Jewish plan to enslave the world’s peoples and steal their land.

Clearly the threat also comes from hotheaded, often racist police officers who fire bullets into the backs of Black men and women or kneel on their necks so they can’t breathe. Needless to say, there was little mention at the Republican convention of Jacob Blake, and none of George Floyd or Breonna Taylor.

And the threat comes from Trump’s own lackeys, who have brazenly broken laws to help him attain and keep power. Since Trump first promised to hire only “the best people,” 14 Trump aides, donors and advisers have been indicted or imprisoned.

Trump’s personal lawyer, Rudy Giuliani — who ranted at the Republican convention about rioting and looting in cities with Democratic mayors — has repeatedly met with pro-Russia Ukrainian parliamentarian Andriy Derkach, whom American intelligence has determined is “spreading claims about corruption ... to undermine former Vice President Biden’s candidacy and the Democratic Party.”

Trump’s Postmaster General, Louis DeJoy, who had been a major Trump campaign donor before taking over the Postal Service, is being sued by six states and the District of Columbia for allegedly seeking to “undermine” the postal service as millions of Americans plan to vote by mail during the pandemic.

Not to forget Secretary of State Mike Pompeo, who spoke to the Republican convention while on an official trip to the Middle East in apparent violation of the Hatch Act, which prohibits officials of the executive branch other than the president and vice president from engaging in partisan politics.

In short, the real threat to American law and order is found in Donald Trump’s above-the-law, race-baiting, me-first presidency. This nation is in serious need of protection from him, and from the bottom-dwellers whose behavior he incites and justifies.

Robert Reich, former U.S. Secretary of Labor, is professor of public policy at the University of California at Berkeley and the author of “Aftershock: The Next Economy and America’s Future.” He blogs at www.robertreich.org.