Five myths about voting by mail 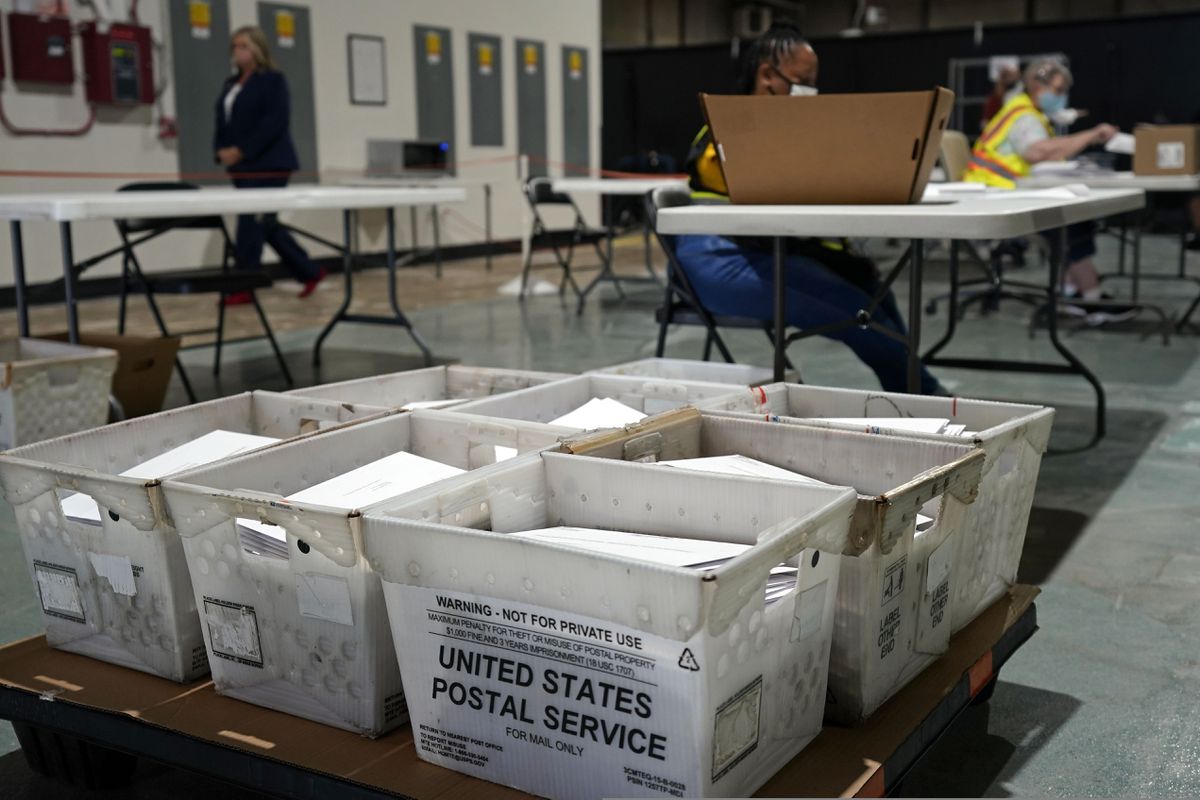 Workers prepare absentee ballots for mailing at the Wake County Board of Elections in Raleigh, N.C., Thursday, Sept. 3, 2020. North Carolina is scheduled to begin sending out more than 600,000 requested absentee ballots to voters on Friday. (AP Photo/Gerry Broome)

Workers prepare absentee ballots for mailing at the Wake County Board of Elections in Raleigh, N.C., Thursday, Sept. 3, 2020. North Carolina is scheduled to begin sending out more than 600,000 requested absentee ballots to voters on Friday. (AP Photo/Gerry Broome)

David Daley is the author of “Unrigged: How Americans are Battling Back to Save Democracy,” and the national best-seller “Ratf**ked: Why Your Vote Doesn’t Count.” He is a senior fellow at FairVote.

Election Day looks different during a pandemic: Most states, eager to make voting safer and more efficient amid the coronavirus crisis, are allowing voters to cast ballots by mail. Record numbers of Americans are expected to take advantage of that option - despite months of warnings, without evidence, from President Trump and other Republican officials that mail-in voting is unreliable and will lead to widespread fraud. Years of research tell a different story.

Describing Democrats' requests in negotiations on the coronavirus relief package, including more funding for mail-in and early voting, President Trump told “Fox and Friends” in March, “They had things, levels of voting, that if you ever agreed to it, you’d never have a Republican elected in this country again.” Georgia House Speaker David Ralston, a Republican,voiced similar concerns after his state decided to send every registered voter a form to request an absentee ballot for the June primary, saying that it would be “extremely devastating to Republicans and conservatives.”

Of course, the numerous Republicans who have been elected to statewide office in Utah, Colorado and Oregon, three of the five states that use universal mail-in voting, prove that the method does not doom GOP candidates. In fact, research shows that mail-in voting favors neither party. This year, researchers at Stanford University’s Democracy and Polarization Lab examined the partisan impact in California, Utah and Washington, which rolled out vote-by-mail gradually by county, allowing for natural comparisons between counties that voted by mail and those that did not. They found that universal vote-by-mail “modestly increases participation while not advantaging either party” in turnout or vote share. Another study from this year, by political scientists at Brigham Young and the University of Virginia, had similar findings. Comparing the 175 counties that initiated mail-in voting in 2018 with the almost 3,000 nationwide that voted traditionally, the authors concluded that any partisan impact was so negligible that it could easily be explained by statistical error.

That said, the Stanford study emphasizes that it compared mail-in voting with a “normally administered” in-person election — and no one knows exactly what partisan effect the pandemic may have. In Pennsylvania and other swing states, many more Democrats than Republicans have requested mail-in ballots. At the same time, some in the GOP have openly fretted that the president’s criticism of voting by mail could scare off older Republican voters. “If Trump loses this election it could very well be because he attacked vote by mail,” the veteran GOP strategist Stuart Stevens told the New York Times.

Myth No. 2: Mail-in voting is rife with fraud.

“With Universal Mail-In Voting (not Absentee Voting, which is good), 2020 will be the most INACCURATE & FRAUDULENT Election in history,” Trump tweeted on July 30. The Heritage Foundation calls mail-in ballots “'the tool of choice' of vote thieves,” maintaining a database of voter fraud cases as evidence of supposedly widespread issues.

But academics, election law experts and election administrators say voter fraud is vanishingly rare. Veteran Republican election lawyer Benjamin Ginsberg wrote in The Washington Post that the “basic truth” is that “four decades of dedicated investigation have produced only isolated incidents of election fraud.” How isolated? A Carnegie Corporation and Knight Foundation study of every known voter fraud case between 2000 and 2012 found just 491 cases out of hundreds of millions of votes cast. Even Heritage has documented only 200 or so cases of absentee ballot fraud, out of 250 million ballots cast by mail nationwide during the past 20 years. Fewer than 150 led to a conviction — an average of just over seven convictions a year over two decades.

Myth No. 3: Foreign countries could flood mailboxes with fake ballots.

The president suggested in May that meddling nations could “get the same paper, the same machine — nothing special.” Barr, meanwhile, told the New York Times Magazine that a number of countries could “easily” distribute counterfeit ballots. On Fox News, he cautioned that it would be “very hard for us to detect” the authentic ones.

Any foreign intervention, however, would be inefficient, extraordinarily expensive and highly unlikely to avoid detection. States and localities have multistep processes to prevent forgery and other fraud. “There’s really a dozen different ways” that a falsified ballot would ring alarm bells, Wendy Weiser, director of the Brennan Center for Justice’s democracy program, told Factcheck.org. Most ballot envelopes have a unique bar code assigned to each individual voter. Sometimes an envelope also includes identifying information tied to a birth date or the last digits of a voter’s driver’s license. Counter to the president’s suggestions, mail-in ballots are printed on unique paper stock. Ballots also differ from precinct to precinct because of various local races. The effort required to produce fake ballots would be monumental: not only having the same paper stock and color, and careful attention to local races and ballot design, but also access to sophisticated voter data and the ability to duplicate specific bar codes.

Myth No. 4: High rejection rates of mail-in ballots are a sign of fraud.

During the presidential debate, Trump noted the higher rejection rate of mail-in ballots compared with in-person voting and insinuated that votes for Republican candidates will be systematically discarded if officials decide “we don’t like them.” Another time, he claimed that election officials “throw them out if they have the name ‘Trump’ on it.”

It’s true that, in the 2016 general election, some 319,000 absentee and mail-in ballots were discarded nationwide, about 1 percent of the overall votes cast by mail. The number of rejected mail ballots is certain to increase this year, simply because so many more Americans will be voting by mail. The rejection rate could also be higher, as states that have little experience with large numbers of mail-in ballots adjust. But research shows that the vast majority of mail-in ballots are disqualified not because someone doesn’t “like them” but because of voter error, a signature mismatch or late arrival. A study by three political science and government professors found that inexperienced mail-in voters were 2.75 times more likely to have their ballots discarded. And according to two studies of Florida’s elections in 2012, 2016 and 2018, the groups whose mail ballots were disproportionately rejected were young voters, Black voters, Hispanic voters and those needing help with their ballots.

Myth No. 5: Tales of ballots in ditches show that mail voting lacks integrity.

Four men were charged with voter fraud in a May election in Paterson, N.J., after hundreds of ballots were found suspiciously bundled and stuffed in several mailboxes. Officials disqualified some 3,200 ballots, and a judge ordered a new election. Trump has repeatedly cited the incident, including in a tweet in June, as an example of a mail-in catastrophe. In late September, he claimed that officials “someplace” had found “many, many ballots thrown into a river.” That same month, photos of envelopes in a dumpster set off widespread social media rumors that officials in Sonoma County, Calif., committed election fraud by trashing “THOUSANDS of Unopened Ballots,” as a Gateway Pundit headline put it.

Under closer examination, these examples fall apart. In Paterson, 19 percent of ballots were indeed disqualified, but more than 70 percent of them were knocked out because of perceived signature issues or voter error; it’s unclear how many ballots might have been connected to fraudulent activity. Officials detected and addressed that alleged scheme so easily that the incident should actually reassure voters that safety procedures work, election law professor Rick Hasen told NPR.

Meanwhile, White House press secretary Kayleigh McEnany tried to clarify that when Trump complained about ballots in a river, he actually meant a ditch — in Greenville, Wis., where abandoned mail was in fact discovered. But Meagan Wolfe, director of the state elections commission, told reporters that the “mail did not include any Wisconsin ballots.” As for the California incident, Sonoma County officials explained that at the time they hadn’t yet sent any ballots for the Nov. 3 election. The photos showed empty envelopes from 2018 that had been “disposed of as allowed by law” — and in the future, officials said, the county would shred such election materials.