Americans hate each other. But we aren’t headed for civil war. 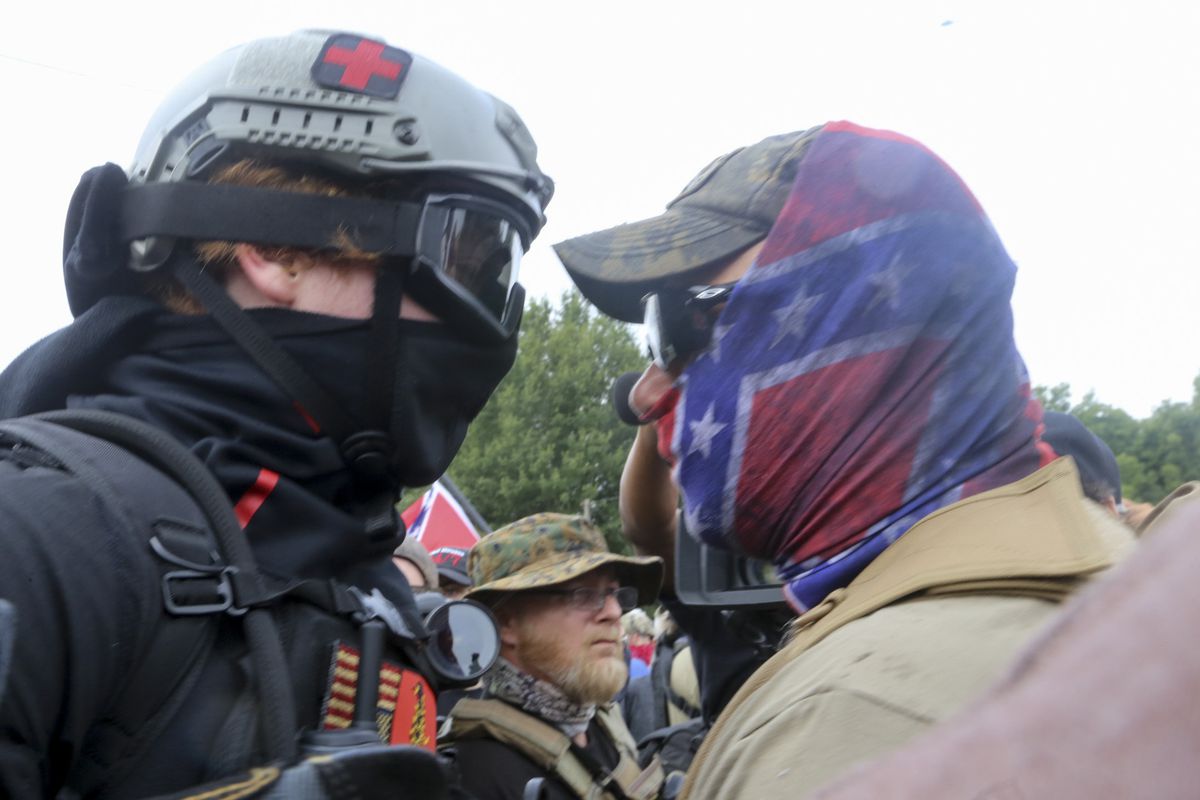 Protestors and counter protestors face off Saturday, Aug. 15, 2020, in Stone Mountain Village, Ga. Several dozen people waving Confederate flags, many of them wearing military gear, gathered in downtown Stone Mountain where they faced off against a few hundred counterprotesters, many of whom wore shirts or carried signs expressing support for the Black Lives Matter movement. (Jenni Girtman/Atlanta Journal-Constitution via AP)

Protestors and counter protestors face off Saturday, Aug. 15, 2020, in Stone Mountain Village, Ga. Several dozen people waving Confederate flags, many of them wearing military gear, gathered in downtown Stone Mountain where they faced off against a few hundred counterprotesters, many of whom wore shirts or carried signs expressing support for the Black Lives Matter movement. (Jenni Girtman/Atlanta Journal-Constitution via AP)

The men arrested this month and charged with plotting to kidnap Michigan Gov. Gretchen Whitmer, D, apparently hoped that doing so might help set off a civil war - pitting lovers of liberty like themselves against treasonous statists. The goal may sound outlandish, but fringe militia members aren’t the only ones who think a second civil war could occur in the United States. Recently, New York Times columnist Thomas Friedman said that the situation in the United States reminded him of his time in Lebanon, where in the mid-1970s street clashes between sectarian militias erupted into multifaceted strife that lasted a decade and a half. David Kilcullen, an Australian scholar and adviser to the U.S. Army,described America in June as being at the point of “incipient insurgency,” while the academic Peter Turchin recently wrote - pointing to riots and rising economic inequality - that “we are getting awfully close to the point where a civil war or revolution becomes probable.”

The logic underlying most of these predictions is consistent and straightforward. Americans are more divided on social and political issues than in previous decades, and they hate each other more. Violence is boiling over: Armed right-wing militants traveled to sites of left-wing protests this summer, supposedly to enforce order, and deadly clashes occurred. If tensions continue to grow, these isolated incidents could become more common - and the United States might follow the path of other nations that have experienced full-blown armed conflict in recent decades.

Despite its appeal, this view betrays a fundamental misunderstanding of political violence. Historically, the academic literature on the causes of civil war was divided into two categories: Some scholars viewed such conflicts as a predictable outcome whenever there were deep grievances within national populations, while others stressed the importance of citizens having an opportunity to act on those resentments. Much of the discussion about violence in the United States today centers, implicitly, on the grievance model, holding that if we know how much different tribes of Americans hate each other, we can predict the likelihood of fighting in the streets.

But scholars now prefer the opportunity model, thanks to large-scale studies that examine political violence worldwide with cutting-edge statistical methods. Grievances and societal cleavages exist everywhere, waiting to be exploited. What distinguishes the countries that descend into civil war from those that do not is the lack of state capacity to put down rebellion - for reasons rooted in politics, economics or geography.

You might expect, for instance, states that lack democracy, that have diverse populations or that discriminate against minorities would be at the highest risk of internal conflict, because such conditions foment bitter grievances. But in fact, those qualities are at most loosely correlated with civil war, as scholars like the Stanford University political scientists James Fearon and David Laitin and the University of California at San Diego’s Barbara F. Walter have shown.

Rather, civil wars happen where the state is weak. Lower levels of wealth predict civil war, because poor countries lack the law enforcement and military capability to put down armed rebellions. That helps to explain recent conflicts in such varied countries as Yemen and Congo. Power vacuums, as occurred during and after decolonization, after American regime-change wars and after the collapse of the Soviet Union, create uncertainty about who is in charge and can inspire those who seek power to take up arms. There are other factors, too: States that are rich in oil see more civil war because the potential payoffs of a successful rebellion are higher - but this applies only up to a certain level of income, after which point the government is often able to buy off or destroy any potential challengers.

The Balkans offer a ready example of how grievance based on ethnic tension must be intertwined with the collapse of order for groups to take up arms against one another. While various ethnolinguistic communities there long eyed each other with suspicion, going back to the days of the Ottoman and Astro-Hungarian empires, those tensions did not lead to violence for most of the region’s history, including during the nearly half-century of communist rule. But when the Soviet empire fell and communist governments were discredited, parts of Yugoslavia began to declare independence. Serbs, Bosnians, Croats and Albanians,incited by political opportunists and demagogues, fought wars against one another for a decade, drawing in the international community, until sovereign states emerged with new, widely accepted borders.

In one influential 2006 study representative of the new school of thought - one that examined 172 countries from 1945 to 2000 - the political scientists Havard Hegre, of the Center for the Study of Civil War and Nicholas Sambanis, of Yale University used advanced statistical tools to determine which of 88 factors most consistently predicted civil war. Grievance-based measures like authoritarian government and ethnolinguistic diversity ranked low or had no discernible effect (although the latter did predict conflict when the analysis included the lowest level of internal conflict measured, defined as 25 or more deaths in a year). In contrast, Hegre and Sambanis found that measures of opportunity like a small military establishment and rough terrain - which offers a base from which rebels can strike - had a much stronger and more consistent effect.

Geography is a surprisingly potent variable in predicting civil war - and can confound even moderately strong states. During such conflicts, governments usually control the cities, and rebels form bases in relatively inaccessible regions like mountains, forests and swamps. Countries that have had problems with mountain-based minorities include Russia, which has confronted rebels in Chechnya, and Turkey, which is still fighting Kurds in the southeast of the country. (Until the 1990s, the Turkish government even referred to Kurds as “Mountain Turks,” denying their identity while acknowledging the geographical nature of the problem.)

Even with the most difficult geographic conditions, however, wealth and government power tend to erase opportunities for rebellion. Consider that in 1948 and 1949, South Korea faced a communist-led uprising on Jeju Island - which lies in the Korea Strait, about 60 miles from the mainland - in a conflict that cost as many as 30,000 lives, mostly civilians. A poor, newly independent South Korea had difficulty bringing that island under control and relied on brutal tactics to do so, including summary executions. But now that South Korea has joined the club of modern, industrialized states with advanced militaries, the idea of a region like Jeju rebelling has become unthinkable.

Wealth and military power explain why, in the United States, civil war is likely to remain a metaphor. Its per capita gross domestic product is about $62,000 a year, among the highest in the world, and its military is clearly capable of wiping out any challenges to state power. (The U.S. Civil War occurred when the nation had a per capita GDP comparable to that of a developing nation today, and when military technology was limited to rifles and cannon.) The Pentagon has 1.3 million active-duty personnel, can find terrorists on the other side of the world and wipe them out with the push of a button, and boasts a command-and-control structure with no recent history of factionalization. There is no swamp or mountain peak that is beyond the easy reach of the U.S. military.

A recent survey by Nationscape revealed that 36 percent of Republicans and 33 percent of Democrats thought that violence was at least somewhat justified to accomplish political goals. The opportunity model suggests that while a survey result like this reveals disturbing things about our political culture, it does not presage civil war.

To be sure, riots and general discord can happen as long as leaders lack the political will to respond (or if, as today, leaders disagree about the line dividing peaceful protest from lawlessness). But as soon as the authorities perceive a serious enough problem, they can move quickly and decisively, a lesson learned by the anarchists who recently took over part of Seattle, declaring it the Capitol Hill Autonomous Zone. They were tolerated for just over three weeks until they were cleared out by local police in partnership with the FBI. Law enforcement at the local and national levels, from police to the military, remains united and under civilian control, willing and able to put down potential threats to our governing system or territorial integrity.

The wide availability of guns does make the American situation unique among developed countries - and leads to more horrific low-level violence, such as the 2019 El Paso shooting, in which a White racist angry about immigration is accused of targeting innocent Hispanics, killing 23 people. (He had apparently sought, but failed, to provoke a larger conflict.) But that is not civil war - and using such hyperbolic language may actually lead to more violence, as radicals come to believe that true civil war is possible and undertake copycat attacks.

In fact, the situation in Michigan suggests how intoxicating the idea of civil war can be. Had the recently arrested anti-government extremists not been under close federal surveillance - itself a reassuring sign of state capacity - they might have committed hideous political violence. Yet their goal of inciting civil war would have remained out of reach.

Those predicting civil war have correctly identified serious problems in American society: Ever-widening divisions based on factors including race, geography and partisanship make it difficult to respond to such varied threats as pandemics, economic crises and climate change.

But our problem remains bitter polarization and distrust, not the literal disintegration of the country. The United States faces monumental challenges in the coming months and years, from a rancorous election (and its aftershocks) to difficult racial issues to continuing environmental calamity. Extreme partisanship and political discord will absolutely make everything harder. But the sooner we realize that civil war is highly unlikely, the sooner we can focus on real problems.