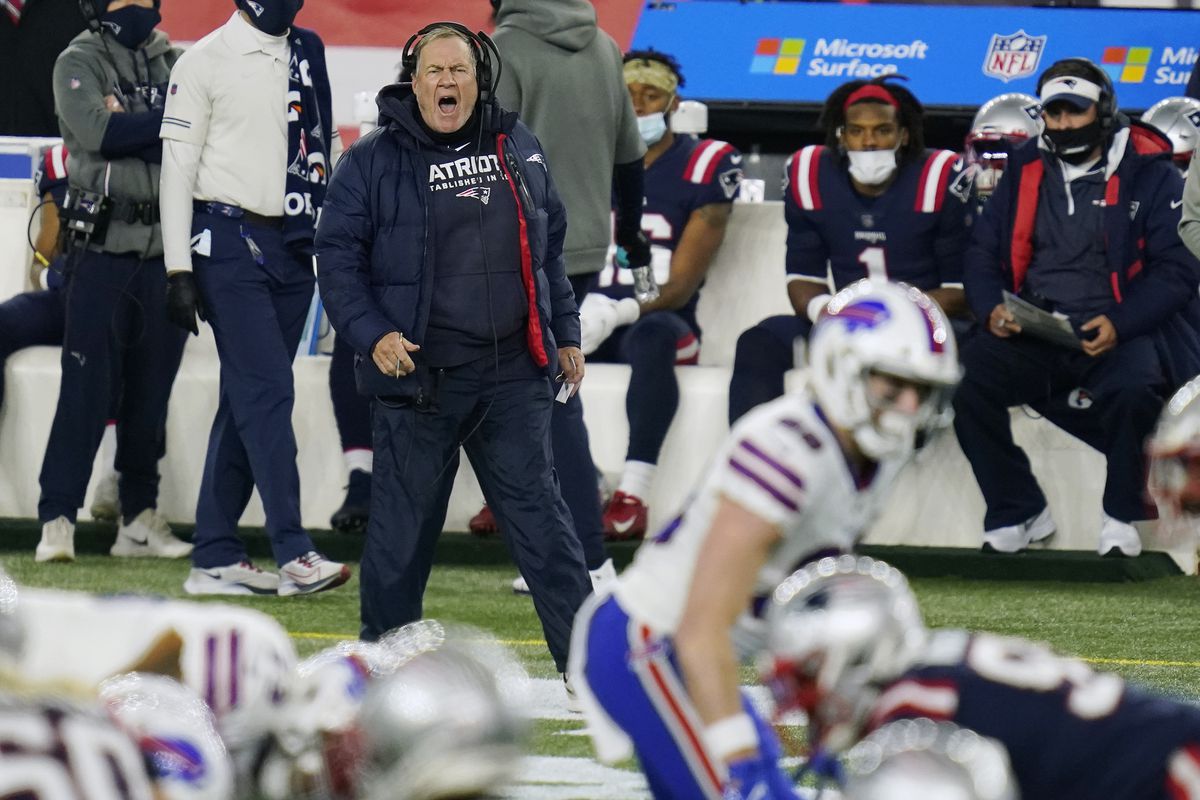 New England Patriots head coach Bill Belichick shouts from the sideline in the first half of an NFL football game against the Buffalo Bills, Monday, Dec. 28, 2020, in Foxborough, Mass. (AP Photo/Charles Krupa)

New England Patriots head coach Bill Belichick shouts from the sideline in the first half of an NFL football game against the Buffalo Bills, Monday, Dec. 28, 2020, in Foxborough, Mass. (AP Photo/Charles Krupa)

Bill Belichick has always been admirably contrarian, a stubborn individualist who refuses to be pressured by external opinion or the crowd. No outsider, therefore, could have changed his mind about accepting a Presidential Medal of Freedom from President Trump a week after the storming of the U.S. Capitol. The change could only have come from within, from something he saw with his own retinas and judged with his own conscience.

Coaches always go to the tape. And the tape, that hideous tape, does not lie. Had Belichick stood by his acceptance, he would have risked handing a propaganda victory to militia terrorists, white supremacists, cop killers, avowed would-be assassins, the neckbearded scum who chased a Capitol Police officer up those Capitol stairs. The opposite of patriots - traitors.

Belichick’s attendance at the White House ceremony in this climate and context could never have been banal. There was no way to somehow separate himself from the article of impeachment against Trump for “incitement of insurrection,” or from the oath-profaning bizarros who beat officers with their pikes and flagsticks, injuring more than 58 of them. To have accepted a medal from Trump under these circumstances would have been to normalize if not tacitly affirm them, to suggest that what happened wasn’t so bad that it prevents a trip to Washington to pick up a ribbon.

Belichick, son of a veteran and Naval Academy instructor, is a famous nonconformist, but he is also an institutionalist. That’s indisputable. It is why he apparently concluded that, like it or not, fairly or not, intentionally or not, he would be perceived by his fellow citizens and more importantly his players as giving a patina of harmlessness to insurrectionist thugs who did such violence in the Capitol halls, flailing with their sticks as they demanded executions and inquisitions. He is no ordinary sports figure, not some long-retired golfer or college coach. He is the active coach of a revered NFL team named the “Patriots.” And the winningest man in a game the president has relentlessly used for political cover and convenient distraction.

“Above all I am an American citizen with great reverence for our nation’s values, freedom and democracy,” Belichick wrote in a statement Monday night announcing he would decline to accept the medal.

There is still a lot to learn about the surge of violence that overwhelmed the Capitol on Wednesday, and Trump’s culpability could be argued endlessly. But what we do know is this: The mob acted in the name of Trump and with his explicit encouragement. Among them were people who erected a gallows and noose on the Mall. A packer of molotov cocktails. Men who talked of hanging Vice President Mike Pence and shooting Speaker of the House Nancy Pelosi, one of whom allegedly threatened to put a bullet into the head of that “c---.” An anti-Semite in a “Camp Auschwitz” shirt. All of them whipped up by two days of Trump rallies, during which one woman actually said into a microphone, “Hitler was right on one thing. . .”

Belichick usually holds his own thoughts so closely that it’s impossible to know his convictions. An exception came during the 2016 election, when he was enough of a Trump supporter that he wrote him an admiring letter and wasn’t embarrassed to have it publicized. On Monday, he acknowledged he was “flattered” by the offer of the medal when Trump first extended it last week.

But Belichick has also been demonstrably supportive of his players during the NFL’s spring and summer of protests over racial injustice, and he made a point to say in his Monday night statement, “One of the most rewarding things in my professional career took place in 2020 when, through the great leadership within our team, conversations about social justice, equality and human rights moved to the forefront and become actions.”

Belichick has never gone in for hollow gestures, or specious patriotism, either. Asked once why he didn’t wear the NFL’s “Salute to Service” mock camo and patchwork with which the league has fundraised for and aligned itself with military causes, he replied, “I don’t think what sweatshirt I wear is that important,” and added that he doesn’t care about “whatever the theme of the week is.”

Instead, he has spent part of an offseason narrating a World War II documentary about D-Day, made regular visits to Walter Reed and talked meaningfully about Veterans Day as a day that makes all other American holidays even possible. He was reared on the Naval Academy campus, and to this day he supports veterans’ causes through his favorite restaurant, Mission BBQ, where the national anthem is sung every noonday, and which ships ribs to troops overseas by the ton.

Among other things, Belichick is said to be a serious student of military history. He knows, then, that those howlers of superstition and spite who beat their way into the Capitol were not patriots or revolutionaries, wronged and ill-used by authority. They’re an age-old American type, all right, just not that one. You’ve met the type over and over again in the darkest American periods: They’re the Know Nothings who persecuted Catholic immigrants, the fire-eaters who called slavery a positive good for society, the George Wallacers who venomously railed that the only four-letter words hippies didn’t use were work and soap, the redbaiters who chased their fellow citizens for invisible moral crimes. Belichick clearly also knows that history sometimes presents inflection points for ordinarily apolitical people, who can be defined as much by what they won’t condemn as what they do.

Trump has habitually used athletes to cloak himself in their aura and claim a piece of their popularity and sway. He put Belichick in a profoundly unfair position and undoubtedly meant to use him as much as honor him. It’s unfortunate because Belichick deserves high honor from a president. But Belichick clearly saw he could not claim this one without ruining himself, defacing his place in the game’s history and destroying his standing with players he respects and even loves - yes, loves.

As inscrutable and calculating as Belichick can be, anyone who observes him at all closely can’t fail to miss his affection for his longtime team leaders, men such as Devin McCourty and Matthew Slater who have spearheaded the Patriots’ social justice initiatives. An affection that caused Belichick to do what he so seldom does: explain himself.

“Continuing those efforts while remaining true to the people, team and country I love outweigh the benefits of any individual award,” Belichick said.

This is not a time for honors. It’s a time for duty. And when accepting a ribbon round the neck signals a casual tolerance, if not outright endorsement, of those violent blast-furnace fanatics, the only duty is to refuse. Belichick did his duty. It’s his finest moment as a leader.