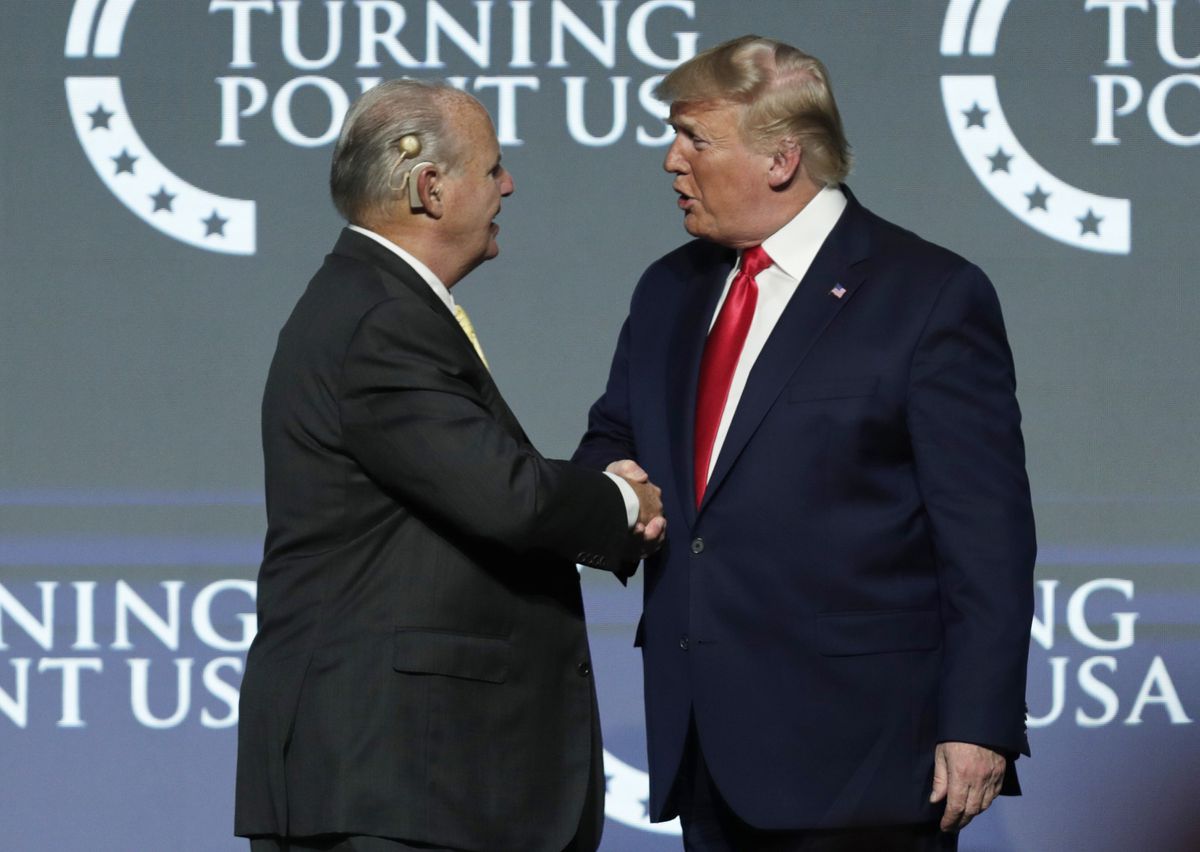 FILE - Rush Limbaugh, left, shakes hands with President Donald Trump as he introduces Trump at the Turning Point USA Student Action Summit at on Dec. 21, 2019, in West Palm Beach, Fla. Limbaugh died of lung cancer on Wednesday, Feb. 17, 2021, four weeks after Trump left office. He was memorialized as the "greatest of all time" on Fox's website, but to critics who saw Limbaugh as a spreader of bigotry, it was good riddance. Limbaugh remained at the top of the heap among radio hosts even until his death. (AP Photo/Luis M. Alvarez, File)

FILE - Rush Limbaugh, left, shakes hands with President Donald Trump as he introduces Trump at the Turning Point USA Student Action Summit at on Dec. 21, 2019, in West Palm Beach, Fla. Limbaugh died of lung cancer on Wednesday, Feb. 17, 2021, four weeks after Trump left office. He was memorialized as the "greatest of all time" on Fox's website, but to critics who saw Limbaugh as a spreader of bigotry, it was good riddance. Limbaugh remained at the top of the heap among radio hosts even until his death. (AP Photo/Luis M. Alvarez, File)

Philip Bump is a correspondent for The Washington Post based in New York. Before joining The Post in 2014, he led politics coverage for the Atlantic Wire.

The first time I remember hearing Rush Limbaugh’s radio show, I was in high school. It was 1991, and I was in the district office of then-Rep. Jim Traficant, D-Ohio, for whom I’d earned the dubious honor of interning.

Traficant was already infamous both for his public persona, which tended toward the eccentric, and his sketchy background. Eventually, his corruption would lead him to be one of the two members of the House expelled by that body since the Civil War. But his constituents loved him. They loved his panache, and they loved his irreverence. But this was Youngstown, epicenter of the Rust Belt politically, and they loved that he was unabashed in fighting for them, whatever else he was doing on the side. In many ways, Traficant’s political pitch was the same one that Donald Trump would use three decades later, to equivalent success.

So in retrospect it is not a surprise that Traficant had Limbaugh’s show playing over speakers throughout his office as he and his staff conducted their business. Limbaugh, too, was Trump before Trump. Limbaugh, in fact, helped create Trump’s pathway to the presidency, whether the former president ever recognized it or not.

“I didn’t know Rush at all,” Trump said in a brief interview on Fox News shortly after news of Limbaugh’s death broke on Wednesday. “I had essentially never met Rush, and, then, when we came down the escalator, he liked my rather controversial speech. I made a speech that was a little bit on the controversial side, and he loved it.”

That speech, of course, being the one in which Trump suggested that immigrants from Mexico were mostly rapists and other criminals.

“And he was - without ever having met him or talked to him or had lunch with him or asked him,” Trump continued, “he was with me right from the beginning, and he liked what I said and he agreed with what I said and he was just a great gentleman, a great man.”

Limbaugh’s show went national in 1988, back when Trump was just a real estate developer (and back when Trump was first a Republican). His approach to politics was a now-familiar one, littered with sweeping disparagements of his political opponents, unfettered by any traditional sense of propriety. At the time, though, it was novel, attracting attention in much the same way that the kid in middle school who first learns dirty jokes can build an audience. It was unapologetic and unsparing - and it was directed squarely at the left.

When Limbaugh had a television show in the early 1990s, his executive producer was a fellow named Roger Ailes. Ailes went on to found Fox News, the network that would eventually define conservative media nationally. Limbaugh and other radio hosts, though, continued to press forward with a more volatile and combative type of political media, shaping Republican politics directly.

But you don’t have to take our word for it. After Republicans won the House for the first time in decades in the 1994 midterm elections, Limbaugh’s influence was explicitly acknowledged.

“Rush is as responsible for what happened here as much as anyone,” former congressman Vin Weber, R-Minn., said in December of that year, as reported by the New York Times. “The people who elected the new Congress” were the people who told a pollster that they listened to 10 or more hours of talk radio each week, a group that voted Republican in the midterms by a 3-to-1 margin.

(Limbaugh gave a speech to those freshman Republicans in which he encouraged them to “leave some liberals alive” to “show our children what they were.”)

What Limbaugh understood was that the accepted boundaries of appropriate conversation were often simply norms that could be ignored. Ignore them and you could reach a lot more people. His unapologetic toxicity was often amusing to his supporters and generally reviled by his opponents, a polarization that helped fuel attention and popularity. It’s easy to see why it would appeal to someone like Traficant, whose views of the Democratic establishment weren’t particularly positive and whose base aligned with Limbaugh’s.

In a sense, this was also what Trump keyed in on. He was the voice of those same Americans largely because years of consuming conservative media that had adopted Limbaugh’s approach had honed Trump’s ability to speak that same language. In the same way that Limbaugh gained notoriety by breaking the norms of political talk radio, Trump gained attention by breaking the norms of seeking elected office.

Of course Limbaugh liked Trump’s speech about immigrants from Mexico. A few months prior, Limbaugh had suggested that immigrant children from Central America were spreading disease in the United States. Hyperbole was his lodestar, something he long defended by portraying himself as the necessary counterpoint to a mainstream media that he saw as overly liberal. (Early in his career, he responded to calls for giving the left equal time on the air with a simple rebuttal: “I am equal time!”)

Trump embraced the rhetoric and stylings of conservative media that Limbaugh had helped to shape. In doing so, Trump stood out from the more staid Republican field just as Limbaugh stood out from his competitors 25 years prior. There had been six presidential elections between Limbaugh being syndicated and Trump winning the nomination; only Trump embraced the culture-war-uber-alles approach that Limbaugh had modeled. In the middle of his final State of the Union address, Trump awarded Limbaugh the Presidential Medal of Freedom.

On Fox News, Trump praised Limbaugh for having been there “right from the beginning.” Trump meant the beginning of his presidential run. But that’s selling Limbaugh’s influence short. It wasn’t Limbaugh’s embrace in 2015 that made Trump president; it was his tactical rejection of the left that informed how Trump would run in the first place.

In 2016, Trump turned northeastern Ohio red for the first time in decades. His approach was Traficant’s approach was Limbaugh’s approach, and - at least in that region - it worked.