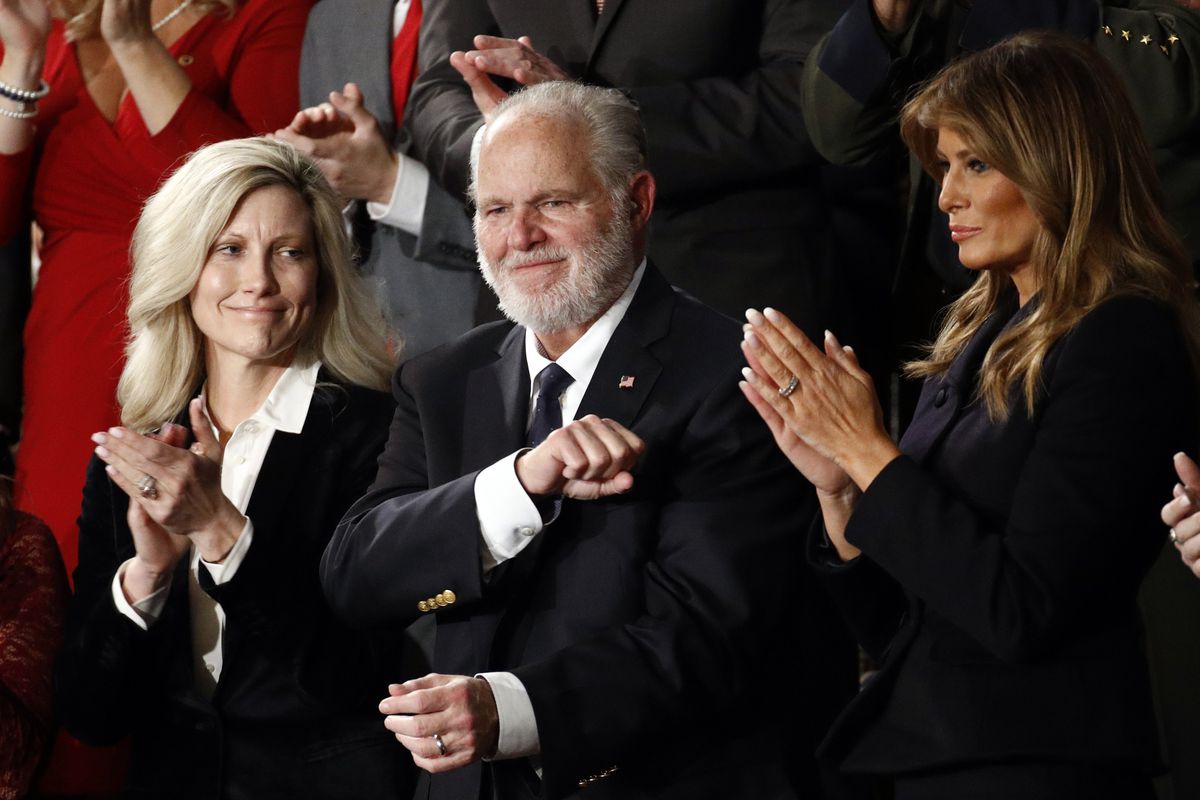 FILE - In this Feb. 4, 2020 file photo, Rush Limbaugh reacts as first Lady Melania Trump, and his wife Kathryn, applaud, as President Donald Trump delivers his State of the Union address to a joint session of Congress on Capitol Hill in Washington. Limbaugh, the talk radio host who became the voice of American conservatism, has died. (AP Photo/Patrick Semansky, File)

FILE - In this Feb. 4, 2020 file photo, Rush Limbaugh reacts as first Lady Melania Trump, and his wife Kathryn, applaud, as President Donald Trump delivers his State of the Union address to a joint session of Congress on Capitol Hill in Washington. Limbaugh, the talk radio host who became the voice of American conservatism, has died. (AP Photo/Patrick Semansky, File)

When conservative radio giant Rush Limbaugh died, it took only seconds for the vultures of the left to swoop down and begin picking at the public corpse.

Not all on the left did so. Some were gracious. But many were filled with glee and rapture that their great enemy was gone. I won’t begin to dignify them with a response. They reveal themselves. And if you wish to read that sort of thing, I’m positive you’ll find it elsewhere.

I prefer to mourn Limbaugh as a great American, a great conservative, a tremendously talented broadcaster who loved his country and its traditions of individual liberty. And he unapologetically made millions of dollars doing it, which fed the rage of his detractors.

Limbaugh was a man with public warts and a bombastic, albeit entertaining manner who, on the radio, trolled his political and philosophical opponents before they controlled Twitter, infuriating them and inspiring their hatred.

But he embraced those warts. He went public with his addiction to painkillers, as portions of his audience were going through similar chaos. And he understood instinctively that big government and big liberal corporate media and their Big Tech masters are adversaries of individual liberty.

Not since the late President Ronald Reagan and William F. Buckley Jr. has there been such an important conservative voice in America. And unlike Buckley, and perhaps even more so than Reagan, Limbaugh spoke directly to the forgotten Americans. They live in what’s derisively called “flyover country,” marginalized by the Washington political establishment, both Democrat and Republican.

He knew who he was. He had a sense of humor about himself. He was a great entertainer, yes, but he knew what he believed. He was no reed in the wind. And he remembered who his audience was, as Reagan moved off the national stage, leaving a void. In the late 1980s and early 1990s, you couldn’t walk into a factory, garage, butcher or machine shop without hearing his show. Some even had Rush listening rooms.

His audience began to grow. His program soon was syndicated, reaching more than 25 million people a week. He resurrected dying AM radio and became his own political movement. Without him, Republicans would not have taken both houses of Congress in 1994, the Republican Revolution. He made it fun to be a Republican again.

He was a kingmaker for former President Donald Trump when he told his audience that Trump “is one of us.”

Until Limbaugh came along, and later Fox News, there was no mass media outlet that reflected conservative sensibilities. Think of all the forgotten in blue states, now, with public discourse dominated by liberal viewpoints.

In a graceful tribute to the dying Limbaugh before the election, my former Tribune colleague John McCormick in RealClearPolitics.com wondered if his loyal audience would give Rush one last election victory in November.

“Million by million, listeners got more from their radio speakers than whatever Limbaugh said into his microphone: They learned that while they might be ideological outliers in their families, their workplaces, their schools or their neighborhoods, they weren’t alone. They were part of something much bigger than themselves. Right-of-center Americans who long had felt isolated now were part of a fervent community that gathered for daily liturgy.”

And now that he’s gone, I wonder: Who, if anyone, can fill that role?

Today, there are few national Republican political figures who can explain conservatism to a national audience.

The political right, busy with building a great funeral pyre, has been arguing among itself how best to proceed against the progressive Democrats’ superior position in culture — entertainment, academia, social and news media. And the left busily grinds Rush’s bones to make their bread.

Just as there was no one to fill Buckley’s role or Reagan’s, I don’t think there is anyone who could fill Limbaugh’s place. It just doesn’t work that way. Those who think about replacing Limbaugh should remember why he was a success on his radio program, three hours a day, five days a week, year after year, decade after decade, until lung cancer claimed him.

It wasn’t just talent. Or the ability to command that killer schedule. It was that he wasn’t a phony. You can’t do three solo hours of radio a day for as long as he did and be a phony. The audience has ears. It knows a phony.

Many pundits take themselves far too seriously or they mock everything and hide behind the juvenile sarcasm of the radio morning zoo host. Limbaugh didn’t. He was wise enough not to take himself all that seriously. He loved poking fun at the bombastic public personality he’d created.

“Even when I think I’m wrong, I’m right,” Limbaugh said once. “I am all-knowing.”

He had such great reach that I appreciated when he occasionally would read my columns on the air. Once he read a column in which I ripped football for concussions, predicting the game would die off like the Marlboro Man. Rush described me as a liberal sportswriter.

So, he wasn’t all-knowing.

But he was a great broadcaster. And his death leaves a gaping hole in the heart of conservative America.

John Kass is a columnist for the Chicago Tribune.