The shooter cliches I never want to see again 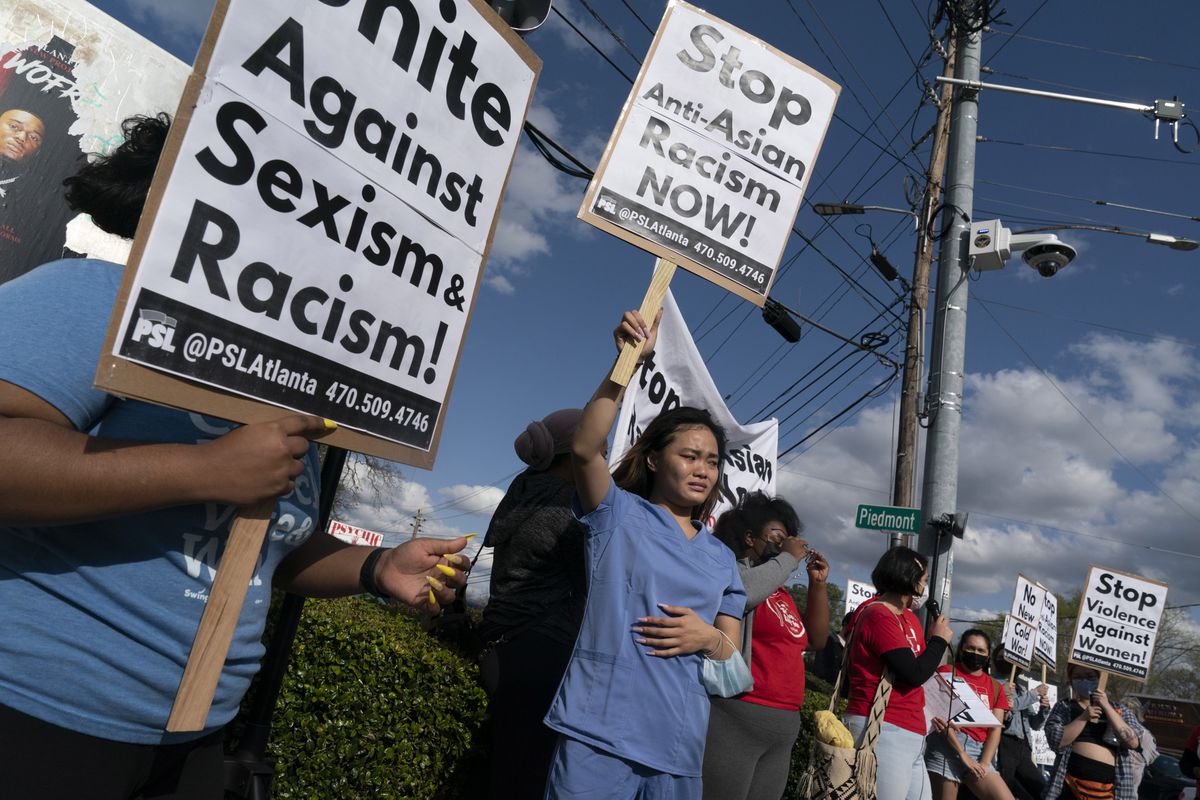 Kitana Truong joins others in rallying against anti-Asian and anti-female violence on Thursday in Atlanta. Georgia's hate-crimes law includes race, gender and national origin in its protected categories, making it potentially applicable to this week's shootings. (Photo by Elijah Nouvelage for The Washington Post)

Kitana Truong joins others in rallying against anti-Asian and anti-female violence on Thursday in Atlanta. Georgia's hate-crimes law includes race, gender and national origin in its protected categories, making it potentially applicable to this week's shootings. (Photo by Elijah Nouvelage for The Washington Post)

An incomplete list of things I do not ever need to hear or read about a shooter again, especially one who targets women:

After he has taken the lives of six or eight or 14 other people, I am not inclined to care what kind of day he had.

I do not need to hear that he was heartbroken over a woman who dumped him/rejected him/ignored him. It is not the responsibility of women to pay attention to men to make sure those men do not shoot other people.

I do not particularly care whether his family was shocked.

I do not particularly care whether he did not resist arrest.

I do not need to hear about how he was a churchgoer, unless that revelation also comes with an acknowledgment that some faiths have historically taught such horrifying messages of misogyny and female subservience that “he went to church” is as much of an explanation as an expression of dumbfoundedness.

What kind of church? Is it a place where non-heterosexual people are viewed as sinful? Where purity culture twists normal desires into malignance? Where premarital sex is seen as such a moral failing that girls believe they are worthless if they have it? Where boys believe they should blame girls for making them want it at all?

I definitely do not need to hear about how he struggled with “temptation.”

Did the shooter previously abuse a girlfriend or harass a colleague? That information is pertinent: Research has shown that domestic violence is often a precursor to mass shootings, and the connection is worth exploring further.

But I do not know whether I will have the stomach to hear about it - I’ve heard this story too often already. It’s generally a story about a terrified woman who was disbelieved by law enforcement, victim-blamed by society and gaslit by the shooter. A woman who tried to leave but feared for her life, who lacked the financial resources and infrastructure to go anywhere anyway. So until we can tell a different kind of story, I don’t know that I need to hear about that.

I do not need to hear about how the time after a deadly shooting is not the time to talk about regulating the guns that shot people.

I would, however, love to hear about mental health. Let’s have that conversation. Let’s have symposiums and colloquiums and serious studies and interventions - my God, let’s talk about mental health. But I do not need to hear about it from the politicians who, as soon as they are given the opportunity, slash community health budgets, show more fealty to insurance companies than their constituents and refuse to address the poverty and other underlying conditions that can make it difficult or impossible for Americans to seek quality mental health care.

In other words, I do not need to hear about mental health from people who are using it as a temporary diversion so they do not have to talk about guns.

Before when I said I didn’t need to hear about how the shooter didn’t resist arrest? OK, fine. We can hear about that. But if we hear about how a White male shooter was brought peaceably into custody, we should also hear about the Black males who were shot or killed by police over traffic infractions, or selling cigarettes, or minor code violations, or while legally carrying a firearm.

Related: “lashed out,” or “end of his rope.” Lashed out against what? End of what rope? What about the world has been so uniquely unfair to them and only them? If these shooters feel they have reached the end of their long, sturdy ropes, then perhaps they do not know what it means to be truly hanging on by a thread. At least not in the way that, say, low-wage immigrant Asian and Asian American women might understand.

Don’t need to read excerpts of a weird manifesto whose reprinting is meant to disgust the American public but will inevitably end up drawing praise on some dark incel-ed cellar of the internet.

Don’t even need to know his name, really.

I want to hear about the systems that helped build the shooter. He didn’t come from nowhere. He is not a lone wolf. He might be a predator, but he is one whose worldview was shaped by the culture that raised him - the things he saw celebrated, the things he saw excused, the people who he was taught have value, the people who he was taught have none.

I want to hear about whatever solutions we need to implement to make sure we don’t ever have to talk about people like him again.

But if your reaction to a man who has slain eight people is to look for ways to humanize him, or blame women for making him inhumane, or imbue him with more dignity than has been bestowed upon the victims whose names we are only beginning to learn, or conflate “madman” with “man who garden-variety-hates women” - then I emphatically, resolutely, do not need to hear about that.