The libertarian case against voting restrictions 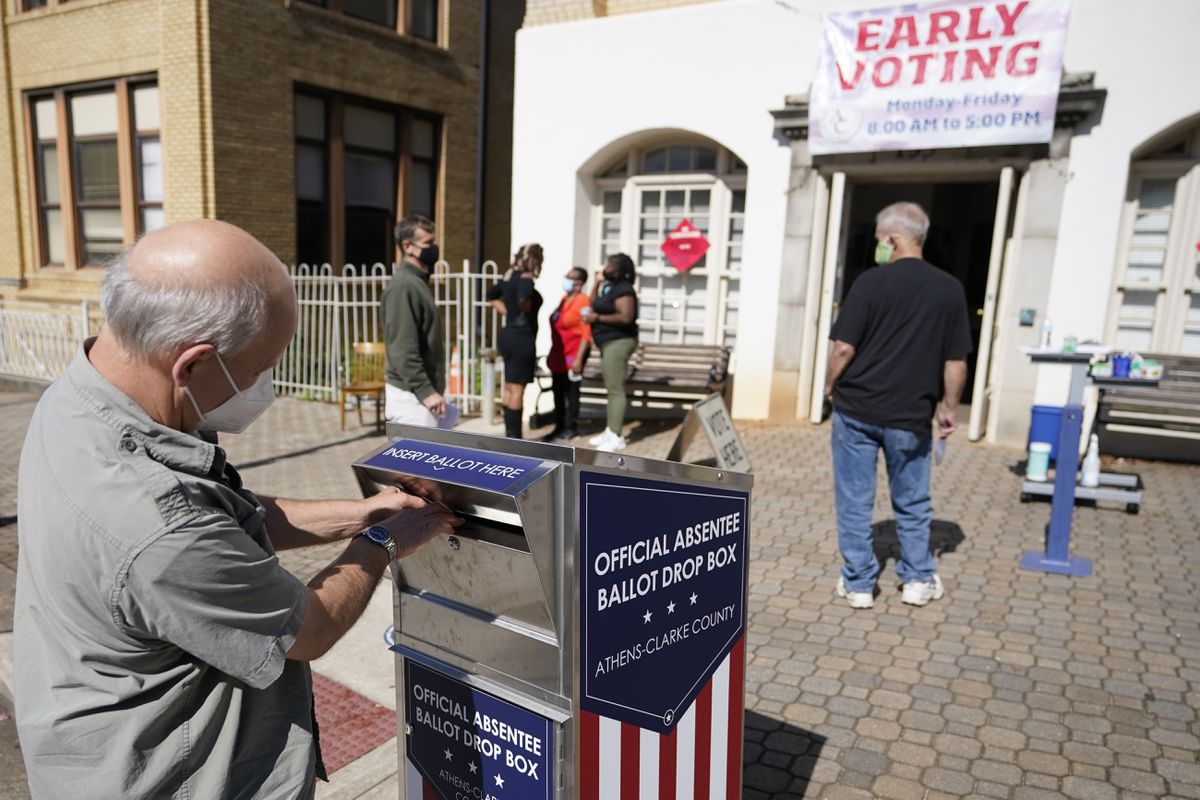 FILE - In this Monday, Oct. 19, 2020 file photo, a voter submits a ballot in an official drop box during early voting in Athens, Ga. On Friday, April 2, 2021, The Associated Press reported on stories circulating online incorrectly asserting “Georgia’s new anti-voting law makes it a jail-time crime to drop off grandma’s absentee ballot in a drop box.” But the election bill known as SB 202, signed into law on March 25, has an exception allowing people to drop off ballots on behalf of their relatives. It also allows a caregiver to deliver a completed ballot on behalf of a disabled person, or a jail employee to deliver a completed ballot on behalf of someone who is in custody. (AP Photo/John Bazemore)

FILE - In this Monday, Oct. 19, 2020 file photo, a voter submits a ballot in an official drop box during early voting in Athens, Ga. On Friday, April 2, 2021, The Associated Press reported on stories circulating online incorrectly asserting “Georgia’s new anti-voting law makes it a jail-time crime to drop off grandma’s absentee ballot in a drop box.” But the election bill known as SB 202, signed into law on March 25, has an exception allowing people to drop off ballots on behalf of their relatives. It also allows a caregiver to deliver a completed ballot on behalf of a disabled person, or a jail employee to deliver a completed ballot on behalf of someone who is in custody. (AP Photo/John Bazemore)

In the midst of all the left-right bickering over new restrictions on voting, I’d like to suggest cutting the Gordian knot through a simple libertarian argument and explain why lovers of liberty should be against them — not only the new ones that are causing such controversy, but those that already exist in dozens of states; and why, to the libertarian, voter ID requirements should be particularly objectionable.

Let’s begin with first principles. To the libertarian, government itself presents a problem. Every law infringes on liberty because every law to some degree coerces — and even tiny “limited” infringements on freedom can add up. Thus, law itself requires a justification more significant than the frenzy of any given political moment.

How does this relate to voting? In the words of the libertarian philosopher Jason Brennan, “Democracy is a method for determining when and how a government will coerce people.” Equal say in the process, Brennan points out, occurs only at a particular stage: elections. After the election, from the libertarian perspective, nothing is democratic; the winning party just spends the next few years telling everyone what to do.

Thus voting is effectively the final opportunity for the objects of government coercion to have a say in who gets to coerce them. The freedom to have that say is the last thing a libertarian would want those holding power at any particular moment to constrain.

What’s the argument the other way? That even if stringent restrictions do involve some burden on voting rights, the infringement is justified by the need to reduce election fraud. But from the libertarian point of view, this argument is somewhat less than persuasive.

Of course libertarians care about election fraud, but a rule that restricts access to the ballot box must be built upon clear foundations of both fact and theory. Proponents need to prove that the problem is both endemic and epidemic; and, having made their proof, must choose the least restrictive means of ensuring the desired end. For example, toughening the penalties for those who commit fraud would be preferable to potentially turning away eligible voters.

So far, the evidence of endemic electoral fraud is thin. This isn’t to say that fraud never happens. But historically, problems with the balloting itself have mostly involved eligible voters being pressured or intimidated - not ineligible voters showing up at the polls. And as the historian Tracy Campbell points out in his book on the subject, the problems tend to arise less in the voting process than in the counting process. Making it harder to vote infringes on liberty without doing anything to reduce the risk that corrupt election officials might inflate the votes for their side. There the solution is surely greater transparency once the count begins. And if we’re concerned about vote-counting problems - such as with mobile-phone voting or mail-in voting - the solution is to make it easier, not harder, to vote in person.

From the libertarian point of view, voter ID laws are especially worrisome. Supporters of such requirements point out that proof of identity is routinely required for a broad range of services, from receiving public assistance to entering many government buildings. Why should voting be any different?

First, photo IDs are demanded of us in far too many places. I might even argue that the always-identified society is itself a threat to the basic liberties of free and equal citizens. There’s no reason to repeat a mistake just because we’ve made it before.

Second, consumption of other government services differs in the most fundamental way from exercising the right to vote, because – again – voting is a citizen’s last opportunity to influence the selection of the people who gain the power to coerce. That’s why it’s the last place where we should be strewing obstacles.

We’ll never have a perfect system for selecting the eligible voters from among those who line up at the polls. We’ll always make mistakes, either turning away eligible voters or allowing ballots to be cast illegally. For the libertarian, the choice is easy: If err we must, then err on the side of widening rather than narrowing the range of personal freedom. The argument has nothing to do with which side a particular obstacle favors.

At election time, we should take voters as they come. Maybe I trudge to the polls looking like Dick Whittington the scullion boy, carrying nothing but my cat and the raggedy clothes on my back. Maybe I arrive fully clad in the armor of hip moderns, ironic facial hair on my chin, AirPods in my ears, credit cards stored on my phone, driver’s license in my slim leather Hermés pouch.

Either way, I am at the polls to help decide who gets to coerce me. Those who already possess the power to coerce – officials of the extant government – are the last people who should be telling me that I don’t get to participate.

Stephen L. Carter is a Bloomberg Opinion columnist. He is a professor of law at Yale University and was a clerk to U.S. Supreme Court Justice Thurgood Marshall. This column does not necessarily reflect the opinion of the editorial board or Bloomberg LP and its owners.