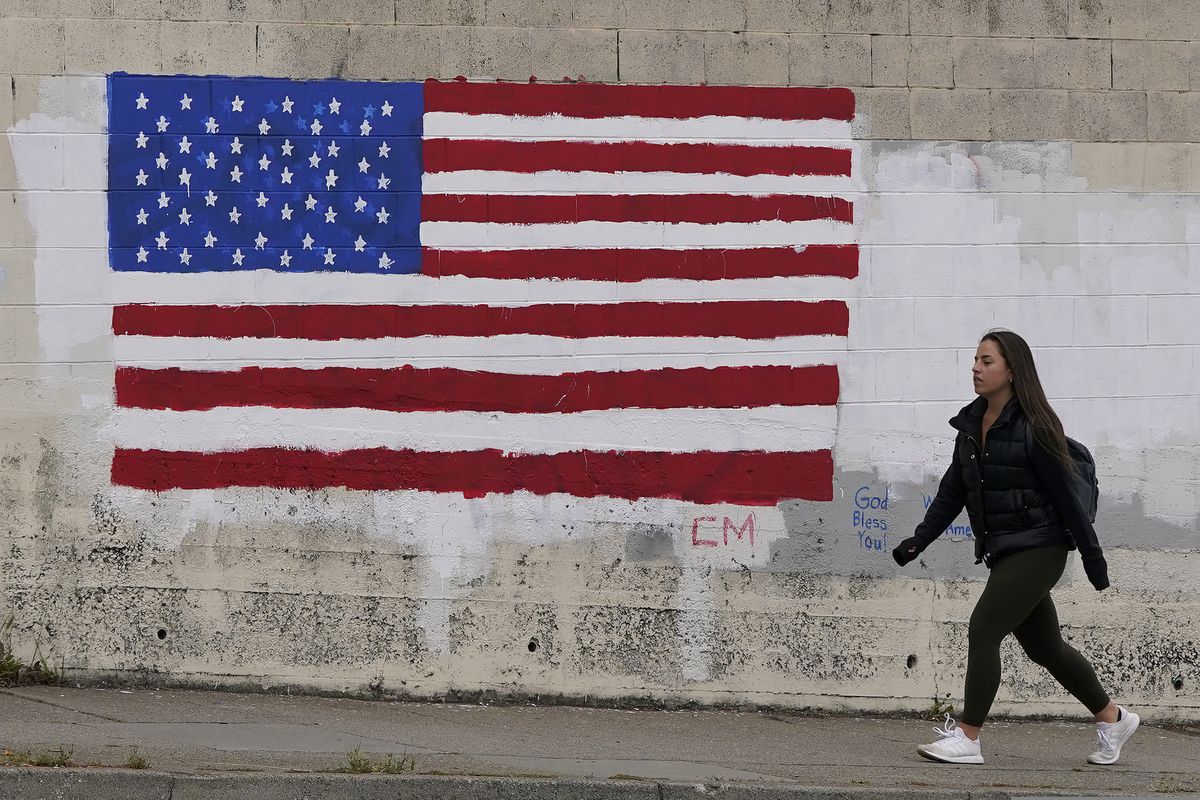 FILE - In this May 13, 2021, file photo, pedestrian walks in front of an American flag painted on a wall during the coronavirus outbreak in San Francisco. A number of states immediately embraced new guidelines from the CDC that say fully vaccinated people no longer need to wear masks indoors or out in most situations. But other states - and some businesses _ are taking a wait-and-see attitude. (AP Photo/Jeff Chiu, File)

FILE - In this May 13, 2021, file photo, pedestrian walks in front of an American flag painted on a wall during the coronavirus outbreak in San Francisco. A number of states immediately embraced new guidelines from the CDC that say fully vaccinated people no longer need to wear masks indoors or out in most situations. But other states - and some businesses _ are taking a wait-and-see attitude. (AP Photo/Jeff Chiu, File)

Tom Nichols is a professor at the Harvard Extension School. He is the author of “The Death of Expertise: The Campaign Against Established Knowledge and Why it Matters.”

The Mask Wars - between Americans who supported mask mandates to fight the coronavirus and those who opposed them - should end now that President Biden and the Centers for Disease Control and Prevention have declared that fully vaccinated people can say goodbye to masks.

So why isn’t this decision being treated as good news?

The CDC’s new guidelines noted that the vaccines not only help protect us from getting covid but also reduce the chance of us spreading it as well. Ergo, vaccinated people can take off the mask and end the distancing.

And yet, for a nation that has been waiting for science to finally sound the all-clear, Americans seem reluctant to take “yes” for an answer. “We feel naked,” first lady Jill Biden said as she and her traveling party took their masks off in West Virginia on Thursday, after the decision was announced. Would House Speaker Nancy Pelosi, D-Calif., be changing the rules requiring masks on the House floor? “No,” she said. Rachel Maddow had CDC director Rochelle Walensky on her show that night. With an almost apologetic tone, Maddow began by asking: “How sure are you?”

Walensky smiled and said: “We’re sure.” (What else could Walensky say? That the CDC wasn’t sure? That it was all guesswork?)

Similar exchanges occurred all day on the cable news, the same venues that agonized a year ago over why Americans couldn’t just “trust the science” and wear masks. Social media, too, buzzed with doubts and, in some cases, erroneous or false statistics. (“People’s inability to assess simple risk,” British writer Edward Luce tweeted while watching a growing panic over unmasking, “startles me daily.”) As the author of a book on why people don’t trust established knowledge, I was adamant that people should heed the CDC. For the rest of the day, my Twitter feed was aflame with people accusing me of being heartless.

Some of this is normal. When scientists speak, laypeople want to know what they mean. The public wants definitive answers, with no shading or nuance: It’s either safe, or it’s not. Science, of course, doesn’t work that way. The CDC has said it’s safe enough, that the risks are now very low, and that the only people who will be hurt by not wearing masks are people who are still unvaccinated.

The CDC also included the unsettling proviso that people in close quarters should wear masks, which - along with the outlier cases of Bill Maher and some members of the New York Yankees who tested positive after vaccination - made people wonder if the CDC, once accused of overstating risks, was now underplaying them. But the CDC’s problem was obvious: Unvaccinated people will be in closed spaces, and without the ability to give a pass to the vaccinated, it was easier simply to mandate masks for everyone in hopes of preventing the holdouts from making each other sick.

It’s easy to criticize people for being wary, and reeling off statistics like a medical Mr. Spock is not very reassuring. But we need to think about ways to process this news in a way that gets us closer to a normal life.

First, as President Joe Biden noted, we have to understand that people are still scared. No one is saying that Americans can’t wear masks for as long as they wish, and for any reason they feel is right. (Personally, a year without a cold or the flu has convinced me to bring a mask with me the next time I travel.)

But if the only reason we’re still wearing a mask is because of covid, then we’re letting our fears get the best of us. The chances of contracting the virus, getting sick or passing it to others is lower than a lot of other normal life activities; even if people are lying about getting vaccinated, those who have had their shots will be safer and unlikely to pass the virus to those who aren’t. States and cities and businesses and schools need to open up as part of our recovery, and hypervigilance will obstruct that if political leaders think they’re too far ahead of the public.

Second, we should embrace our freedom. We can do this by accepting the reality that the vaccines are doing what they’re supposed to do. We’ve done it before. When I was a boy, I was vaccinated against many diseases, including smallpox and polio, a disease that crippled members of my family. We took the vaccines, but more to the point, we stopped living in fear of these scourges. Life has risks, but covid, if we’re vaccinated, need not be one of them.

Finally, there is our own duty as citizens. If we cast doubt on the CDC when the news is good, then we’re arming the usual skeptics among us to fight health authorities again in the future. Worse, we may be undermining the ability of the CDC to guide us on things we already know we’ll need to do later, such as booster shots.

It’s difficult to have faith in science in the face of so much death. But if we cannot accept medical advice even when it’s good news, we’re denying ourselves a return to our normal lives. More important, if we all continue to put our feelings ahead of science, we’re laying the foundations for new disasters in the future.