I watched the GOP’s Arizona election audit. It was worse than you think. 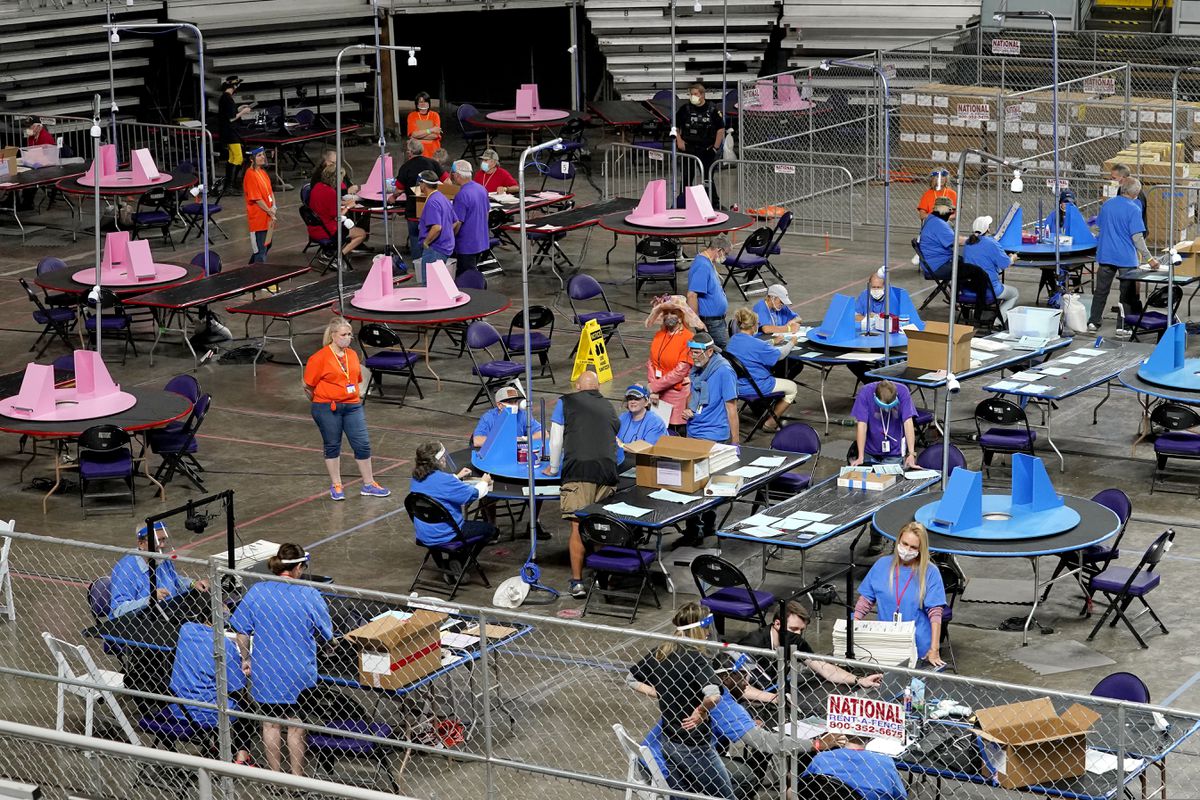 In this May 6, 2021 file photo, Maricopa County ballots cast in the 2020 general election are examined and recounted by contractors working for Florida-based company, Cyber Ninjas at Veterans Memorial Coliseum in Phoenix. (AP Photo/Matt York, Pool, File)

In this May 6, 2021 file photo, Maricopa County ballots cast in the 2020 general election are examined and recounted by contractors working for Florida-based company, Cyber Ninjas at Veterans Memorial Coliseum in Phoenix. (AP Photo/Matt York, Pool, File)

Jennifer Morrell, a former local election official and national expert on post-election audits, is a partner at The Elections Group.

When Arizona’s secretary of state asked me whether I would serve as an observer of the Arizona Senate’s audit of Maricopa County’s ballots, I anticipated that I would see some unusual things. Post-election audits and recounts are almost always conducted under the authority of local election officials, who have years of knowledge and experience. The idea of a government handing over control of ballots to an outside group, as the state Senate did when hiring a Florida contractor with no elections experience, was bizarre. This firm, Cyber Ninjas, insisted that it would recount and examine all 2.1 million ballots cast in the county in the 2020 general election.

So I expected it to be unconventional. But it was so much worse than that. In more than a decade working on elections, audits and recounts across the country, I’ve never seen one this mismanaged.

I arrived at the Veterans Memorial Coliseum on the morning of May 4. Security was conspicuously high: At three stations, guards checked my ID and my letter from the secretary of state. No bags were permitted on the floor, and I had to surrender my phone, laptop and smartwatch. I was allowed a yellow legal pad and red pen to take notes, and provided with a pink T-shirt to wear so I would be immediately identifiable. The audit observers hired by Cyber Ninjas, in orange T-shirts, followed me wherever I went and reported random things about me they found suspicious. Several times someone asked to test my pen, to ensure it really had red ink. Once, they even demanded that I empty my pockets, in which I carried that pen and a pair of reading glasses. I was allowed only to ask procedural questions of the Cyber Ninjas attorney; I couldn’t talk to anyone else performing the work. The atmosphere was tense.

I was stunned to see spinning conveyor wheels, whizzing hundreds of ballots past “counters,” who struggled to mark, on a tally sheet, each voter’s selection for the presidential and Senate races. They had only a few seconds to record what they saw. Occasionally, I saw a counter look up, realize they missed a ballot and then grab the wheel to stop it. This process sets them up to make so many mistakes, I kept thinking. Humans are terrible at tedious, repetitive tasks; we’re especially bad at counting. That’s why, in all the other audits I’ve seen, bipartisan teams follow a tallying method that allows for careful review and inspection of each ballot, followed by a verification process. I’d never seen an audit use contraptions to speed up the process.

[The mess in Maricopa: Votes are still being counted in Arizona. It won’t change the winner. But it might change America.]

Speed doesn’t necessarily pose a problem if the audit has a process for catching and correcting mistakes. But it didn’t. Each table had three volunteers tallying the ballots, and their tally sheets were considered “done” as long as two of the three tallies matched, and the third was off by no more than two ballots. The volunteers only recounted if their tally sheets had three or more errors - a threshold they stuck to, no matter how many ballots a stack contained, whether it was 50 or 100. This allowed for a shocking amount of error. Some table managers told the counters to go back and recount when there were too many errors; other table managers just instructed the counters to fix their “math mistakes.” At no point did anyone track how many ballots they were processing at their station, to ensure that none got added or lost during handling.

I also observed other auditors working on a “forensic paper audit,” flagging ballots as “suspicious” for a variety of reasons. One was presidential selection: If someone thought the voter’s choice looked as though it was marked by a machine, they flagged it as “anomalous.” Another was “missing security markers.” (It’s virtually impossible for a ballot to be missing its security markers, since voting equipment is designed to reject ballots without them.) The third was paper weight - the forensics tables had scales for weighing ballots, though I never saw anyone use them - and texture. Volunteers scrutinized ballots for, of all things, bamboo fibers. Only later, after the shift, did I learn that this was connected to a conspiracy theory that fake ballots had been flown in from South Korea.

The fourth reason was folding. The auditors reasoned that only absentee voters would fold their ballots; an in-person, Election Day voter would take a flat ballot, mark it in the booth and submit it, perfectly pristine. I almost had to laugh: In my experience, voters will fold ballots every which way, no matter where they vote or what the ballot instructs them to do. Chalk it up to privacy concerns or individual quirks - but no experienced elections official would call that suspicious.

At one point, I overheard some volunteers excitedly discussing a stain on a ballot. “It looks like a Cheeto finger,” one said. “Like someone’s touched it with cheese dust!” That had to be suspicious, their teammate agreed. Why would someone come to the polls with cheese powder on their hands? But I’ve seen ballots stained with almost anything you can imagine, including coffee, grease and, yes, cheese powder. Again, when you have experience working with hundreds of thousands of ballots, you see some messes: That’s evidence of humanity’s idiosyncrasies, not foul play.

Their equipment worried me more than their wild theorizing. At the forensics tables, auditors took a photo of each ballot using a camera suspended by a frame, then passed the ballot to someone operating a lightbox with four microscope cameras attached. This was a huge deviation from the norm. Usually, all equipment that election officials use to handle a ballot - from creating to scanning to tallying it - has been federally tested and certified; often, states will conduct further tests before their jurisdictions accept the machines. It jarred me to see volunteers using this untested, uncertified equipment on ballots, claiming that the images would be used at some point in the future for an electronic re-tally.

In a sense, it was heartening that, whenever the secretary of state released letters listing our concerns, the auditors would try to address them. On my first day in the stadium, for example, I noticed runners collecting tally sheets from the counting tables and bringing them to a single person who entered the data into some kind of aggregation spreadsheet, without anyone to verify that this person was entering the data correctly. By my last day of observation, on May 7, the auditors were attempting to set up a quality-control station.

But procedures should never change in the middle of an audit. Here, they did, and not just a couple of times, but almost daily. The training for volunteers also evolved. When I asked my designated auditor about these shifting guidelines, he called it “process improvement.”

What I saw in Arizona shook me. If the process wraps up and Cyber Ninjas puts together some kind of report, that report will almost certainly claim that there were issues with Maricopa County’s ballots. After all, Cyber Ninjas chief executive Doug Logan has publicly voiced his wild conspiracy theories about the 2020 election. But the real problem is the so-called audit itself.

Audits are supposed to make us better. They are supposed to make our elections more secure and transparent - to strengthen the public’s trust in our democratic process. Maricopa County is known for having some of the best election practices in the country: Officials had already undertaken a hand-count audit and a forensic audit of their 2020 ballots and found no evidence of fraud. Now a group with no expertise, improvising procedures as they go, is sowing doubt about the outcome of a well-run election.

This is not an audit, and I don’t see how this can have a good outcome.