Democrats complain about Joe Manchin, but they’re lucky to have him 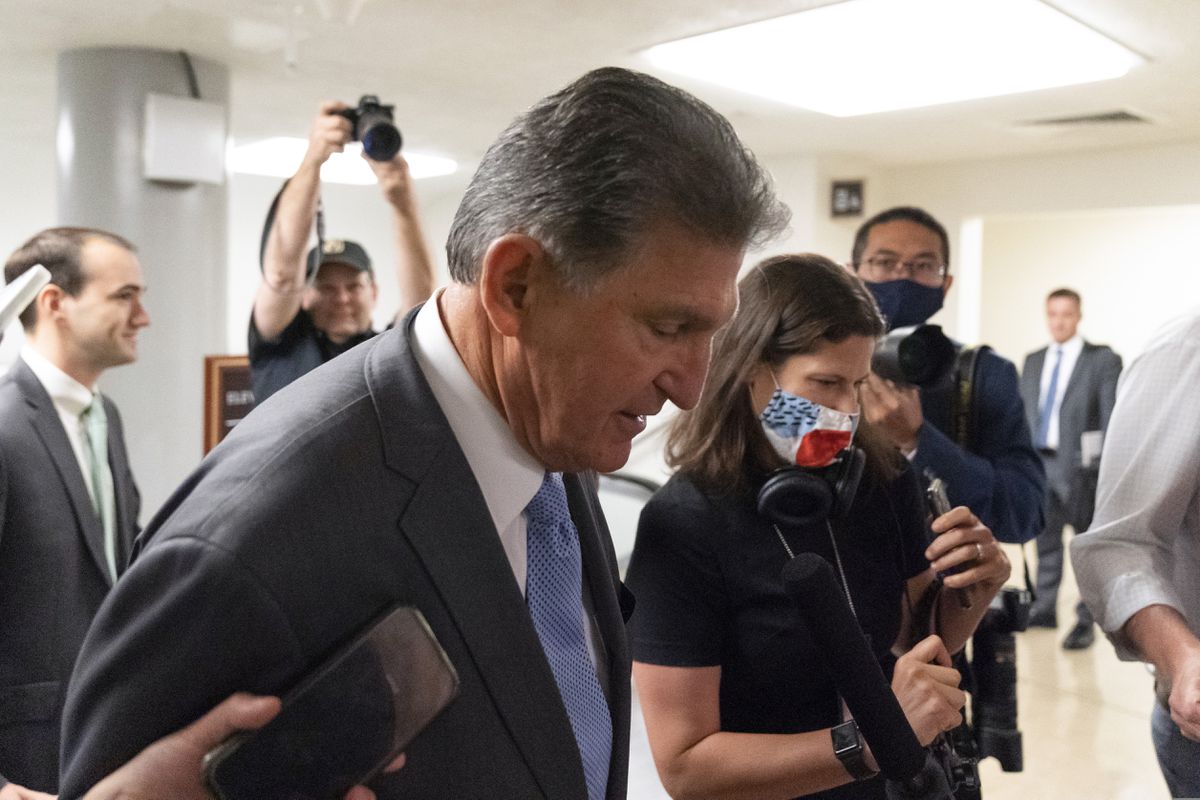 Sen. Joe Manchin, D-W.Va., talks with reporters as he walks to a vote on Capitol Hill, Tuesday, June 8, 2021, in Washington. (AP Photo/Alex Brandon)

Sen. Joe Manchin, D-W.Va., talks with reporters as he walks to a vote on Capitol Hill, Tuesday, June 8, 2021, in Washington. (AP Photo/Alex Brandon)

If Democrats fail to achieve the most significant parts of their agenda this term, Sens. Joe Manchin III, D-W.Va., and Kyrsten Sinema, D-Ariz., will be to blame. Both have opposed eliminating the filibuster, which would allow Democrats to pass bills with a simple majority vote. Manchin has gone further and said he would vote against the For the People Act, aka H.R. 1, which would offset new restrictions on voting passed at the state level by Republicans — he called the bill “partisan.

Manchin also has not said whether he would support President Joe Biden’s $2.3 trillion infrastructure bill, which can be passed through the reconciliation process, if Democrats stick together. He has raised objections about some tax increases, for example.

With the narrowest of majorities in the Senate — a 50-50 split, with Vice President Kamala Harris the potential tiebreaking vote — Democrats cannot afford any defections.

Supporting your party’s agenda when they need you is the bare minimum party leaders ask of their members, which is why “He’s a Republican” was trending on Twitter after Manchin declared his intention to oppose H.R. 1, and why there have been calls for liberals to run primary campaigns against both he and Sinema in the future.

Manchin has been the subject of particular ire, especially after his opinion article last weekend criticizing the voting rights bill. But it should be possible for Democrats to hold two thoughts at once about the West Virginia politician: First, what he is doing is lamentable, damaging to the party’s goals. But second, his presence in the Senate is a gift to the Democratic Party. Having a Democratic senator in 2021 in a state like West Virginia — where neither Hillary Clinton nor Joe Biden could crack 30% of the vote — is a remarkable bit of good fortune.

Had Manchin not won reelection in 2018, his seat would be held by West Virginia Attorney General Patrick Morrisey. This is the Morrisey who joined Texas Attorney General Ken Paxton’s lawsuit that sought to overturn the results in four states where Trump lost; so probably not, to put it mildly, someone whom Democrats could persuade to back the For the People Act. More importantly, all else remaining the same, had Morrisey won, Democrats would be in the minority in the Senate, and Sen. Mitch McConnell, R.-Ky., would be setting the body’s agenda, as majority leader.

But perhaps West Virginia needn’t have chosen between Manchin and someone like Morrisey in the first place. What if Democrats ran and nominated someone more liberal, or at least more likely to vote with Democrats, in Manchin’s next primary?

Consider, however, that Manchin beat Morrisey with 49.6% of the vote to Morrisey’s 46.3%. This in a state where Biden got 29.7% of the presidential vote in 2020 and the Democratic challenger to Sen. Shelley Moore Capito, a Republican, that same year got 27%. There’s no evidence that another Democrat could come anywhere close to Manchin’s electoral performance. (Sinema is a slightly different story, given that Biden won her state; Arizona could plausibly elect a more mainstream Democrat than her. However, the other senator from Arizona, Mark Kelly, also a Democrat, has a voting record similar to Sinema’s.)

Despite Biden’s recent remark that Manchin and Sinema “vote more with my Republican friends” than with Democrats, that’s not true: Both side with their party more often than they vote against it, although by not much. More importantly, they support Democrats for leadership positions. That leadership, in turn, helps shape the agenda. They aren’t the most loyal Democrats, but they’re more Democratic — obviously — than the Republicans who could replace them.

How has Manchin managed to survive in a state that is so hostile to Democrats? He succeeds in part because he’s not a typical modern Democrat. By most metrics, including analyses of voting patterns as well as perceptions by Democratic and Republican activists of ideology — something I and the University of Pennsylvania’s Daniel Hopkins have measured — he is the most conservative Democratic senator. Manchin has cultivated a reputation as a moderate and advertises his willingness to vote with the opposition on his website. He’s built this reputation over the course of his career.

But it is no longer so easy for a local politician to distance themselves from the national party.

Manchin holds the same seat once held by Robert Byrd, the longest serving senator in United States history. Byrd was a Democrat, but one who filibustered civil rights legislation in the 1960s. What has changed is not West Virginia, but the political parties. In the middle of the last century, the most liberal politicians on racial issues were Democrats — but so too were the most conservative. West Virginia voters who might have been comfortable with those conservative Democrats are not so comfortable with the modern party.

Manchin’s position is thus tricky. He needs to distance himself from a Democratic Party that has been slowly but steadily moving left — and not just on matters of race — for his entire political career. (Manchin is opposed to abortion, pro-gun rights, and has broken with his party on environmental issues, banking regulation and many other issues.) But as politics has become more nationalized, that’s harder to do.

This poses a problem for Democrats, especially party leaders. They really want Manchin to back the party’s agenda, but they have little leverage to use against him. The party needs him and the seat he fills, more than he needs them.

It’s not necessarily the end of the argument to say that he would likely lose his seat, and Democrats control of the Senate, if Manchin voted for the filibuster — and H.R. 1. Sometimes, it’s worth it to sacrifice a seat for a policy goal. Democrats have done it before. In 2010, the Affordable Care Act was a Democratic priority, and the party backed it even though it cost them in that year’s election.

And H.R. 1 may even be more important than Obamacare was. Many worry that if the Republican voting restrictions stand, Democrats will be at a perpetual disadvantage in future elections. So for the good of the party in the long run, it may be worth it to trade the Senate seat from West Virginia for this policy victory.

The catch is, that trade-off isn’t one that Democratic leaders, let alone left-leaning pundits, are in a position to make. It’s ultimately up to Manchin. What’s more, we don’t really know the senator’s true preferences — he could be voting against H.R. 1 just to help his reelection chances, or because he sincerely thinks it’s a bad, partisan bill.

Some speculate Manchin will retire in 2024, anyway; he is 73. If that’s his intent, he may feel more free to express his own preferences — whatever they may be — and there would also be no need for Democrats to defer to his electability. It’s hard to say, however, how these shifting dynamics would change how he comes down on votes like H.R. 1 or the infrastructure package.

If and when Manchin retires, some Democrats and pundits will no doubt rejoice. The leadership will be rid of a headache — but, almost certainly, the party will also be rid of a Senate seat. And so the celebration may be short-lived.

Hans Noel, a professor of political science at Georgetown University, is co-author of the new textbook “Political Parties.”