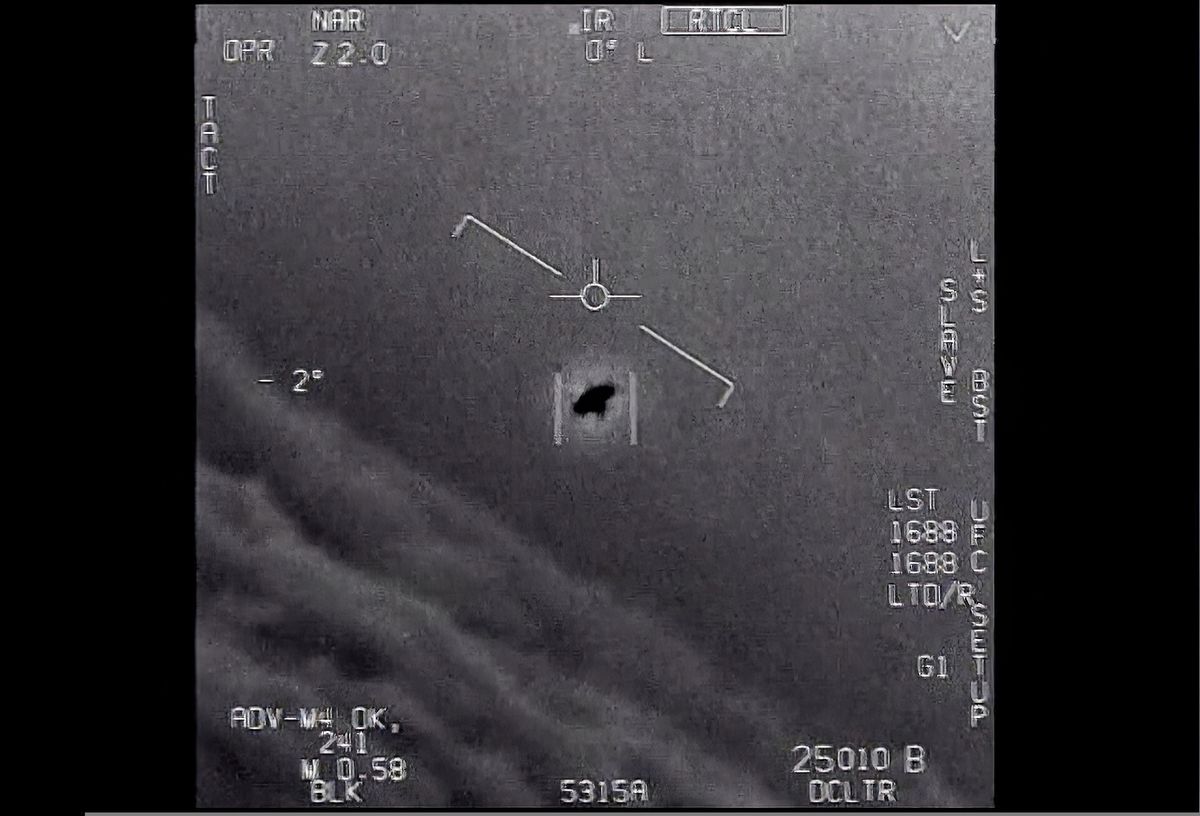 The image from video provided by the Department of Defense labelled Gimbal, from 2015, an unexplained object is seen at center as it is tracked as it soars high along the clouds, traveling against the wind. “There's a whole fleet of them,” one naval aviator tells another, though only one indistinct object is shown. “It's rotating." The U.S. government has been taking a hard look at unidentified flying objects, under orders from Congress, and a report summarizing what officials know is expected to come out in June 2021. (Department of Defense via AP)

The image from video provided by the Department of Defense labelled Gimbal, from 2015, an unexplained object is seen at center as it is tracked as it soars high along the clouds, traveling against the wind. “There's a whole fleet of them,” one naval aviator tells another, though only one indistinct object is shown. “It's rotating." The U.S. government has been taking a hard look at unidentified flying objects, under orders from Congress, and a report summarizing what officials know is expected to come out in June 2021. (Department of Defense via AP)

In April 2020, the Defense Department released videos recorded by infrared cameras on U.S. Navy aircraft that documented the planes’ encounters with a variety of “unidentified aerial phenomena.” Pilots reported seeing objects flying across the sky at hypersonic speeds and changing direction almost instantaneously, capabilities far beyond that of any known aircraft.

What were the pilots seeing? Bizarre atmospheric phenomena? Alien spacecraft? Something else? Several branches of the government have been investigating the events, motivated in part by concern that adversaries such as Russia or China might have made some spectacular technological advance, and later this month, the government plans to publish a report revealing what they know. Reportedly, the government will say there’s no proof of extraterrestrial activity, but that the incidents remain unexplained.

Chances are, though, that we should all be grateful that we don’t yet have any evidence of contact with alien civilizations. Attempting to communicate with extraterrestrials, if they do exist, could be extremely dangerous for us. We need to figure out whether it’s wise — or safe — and how to handle such attempts in an organized manner.

Some scientific circles have already been debating questions around whether to try to contact other civilizations. It’s a topic of profound importance for the entire planet. For 60 years, scientists have been searching with radio telescopes, listening in for possible signals coming from other civilizations on planets orbiting distant stars. These efforts have largely been organized by the SETI institute in California — the acronym stands for Search for ExtraTerrestrial Intelligence — and so far, they’ve had no success. Getting impatient, some other scientists are now pushing for a more active program — METI, for Messaging ExtraTerrestrial Intelligence — that wouldn’t just listen, but actually send out powerful messages toward other stars, seeking to make contact.

The search for aliens has reached a stage of technological sophistication and associated risk that it needs strict regulation at national and international levels. Without oversight, even one person — with access to powerful transmitting technology — could take actions affecting the future of the entire planet.

That’s because any aliens we ultimately encounter will likely be far more technologically advanced than we are, for a simple reason: Most stars in our galaxy are much older than the sun. If civilizations arise fairly frequently on some planets, then there ought to be many civilizations in our galaxy millions of years more advanced than our own. Many of these would likely have taken significant steps to begin exploring and possibly colonizing the galaxy.

Hence, it’s a profound mystery — known as the Fermi Paradox, after the Italian physicist Enrico Fermi — why we haven’t yet seen any such aliens. Many resolutions of the paradox have been proposed, among them the suggestion that all civilizations, once reaching sufficient technological capacity, eventually destroy themselves. Or perhaps aliens are so alien and unlike humans that we simply cannot interact with them.

More alarming is the possibility that alien civilizations are remaining out of contact because they know something: that sending out signals is catastrophically risky. Our history on Earth has given us many examples of what can happen when civilizations with unequal technology meet — generally, the technologically more advanced has destroyed or enslaved the other. A cosmic version of this reality might have convinced many alien civilizations to remain silent. Exposing yourself is an invitation to be preyed upon and devoured.

I’ve written about METI in the past, suggesting such activity takes a huge risk for very little gain. But these concerns don’t convince supporters of trying it, who have some counterarguments. Douglas Vakoch of METI International argues that it’s unrealistic to worry about the danger of an alien invasion. We have, after all, been sending radio and television emissions into space for a century, and a civilization far more advanced than our own will probably have already detected these. If they wanted to invade, they already would have.

He also argues that, in assessing risks, it’s important not only to consider the risk coming from taking an action, but also from not taking that action. Our world faces a number of potentially existential threats, including global warming and destabilization of the environment, and it’s possible that far more advanced civilizations may have already faced these issues and found solutions. If we don’t send out signals, Vakosh writes, we risk “missing guidance that could enhance our own civilization’s sustainability.” It’s also conceivable, he suggests, that we’re making a spectacular misjudgment — and some super-advanced alien civilization may attack us precisely because we haven’t reached out.

For obvious reasons, much of the thinking about these issues has to be rather speculative. The best way forward, perhaps, is to broaden the discussion. If all of humanity is exposed to the possible consequences trying to contact alien civilizations, then more people should be involved in making decisions about what is wise and what isn’t. It shouldn’t be left to a handful of radio astronomers.

One vocal critic of the idea of reaching out to aliens proactively — astronomer John Gertz of SETI — has developed proposals to move toward more inclusive public consideration of these activities. What we need, he suggests, are laws and international treaties to govern more explicit contact attempts. Without prior broad agreement from some globally representative body, Gertz says, contacting extraterrestrials should be considered “as the reckless endangerment of all mankind, and be absolutely proscribed with criminal consequences, presumably as exercised at the national level, or administered through the International Court of Justice in The Hague.”

Currently, no such prohibitions exist. Some informal protocols for interacting with alien civilizations have been informally adopted by researchers involved in SETI, but these are far from legally binding governmental regulations. That’s mostly because, up to now, talking about meeting or contacting aliens has seemed widely speculative — if not a little deranged — despite the apparent scientific plausibility of such an event.

It’s not easy to weigh the pros and cons of activities around which so much remains unknown. We don’t know if there are any aliens. They might be friendly. They might not be. Given the potential risks involved with trying to make contact, perhaps it would be safer and wiser to just wait — we can always reach out later, and meanwhile, our abilities to do passive listening are rapidly growing more powerful.

In 2015, SETI launched a new 10-year program called Breakthrough Listen, funded by a $100 million donation from Russian billionaire Yuri Milner. As a result, SETI is now recording more signals than ever before, over a frequency range some tenfold larger, and bringing more computational power to bear on analyzing the recorded signals. It’s impossible to know how close or far from making a discovery we may be, but Gertz estimates that our chances are at least 100 times greater than they used to be.

The search is also benefiting from astronomers’ knowledge of exoplanets — planets in orbit around stars other than the sun. Since the first exoplanet was found in 1992, we’ve identified nearly 5,000 more, and the rate of discovery is accelerating. Each one give SETI researchers new promising targets to scrutinize.

Personally, all of this makes me dead-set against any experimentation with attempting to contact other civilizations. Why take cosmic risks when we may have a far safer pathway to discovering them, if they’re out there? Of course, even listening comes with some potentially fraught governance issues also: If and when someone really identifies an alien signal, we’ll need to decide if we should reply — and if so, how. Surely such an act — putting all of humanity at risk — ought to be the result of some collective decision. But there’s no mechanism to encourage that now. Any individual or nation could take the human response into their own hands.

Both paths — listening for aliens or trying to call them — have reached the stage where they require broader public discussion, with an eye to developing sensible regulation. That’s going to take the efforts of leaders from many nations, presumably coordinated through the United Nations or some similar international body. It should happen now. Or soon. Before it’s too late.

Mark Buchanan is a physicist and science writer based in Europe.