Israel’s new COVID-19 strategy is cruel to be kind 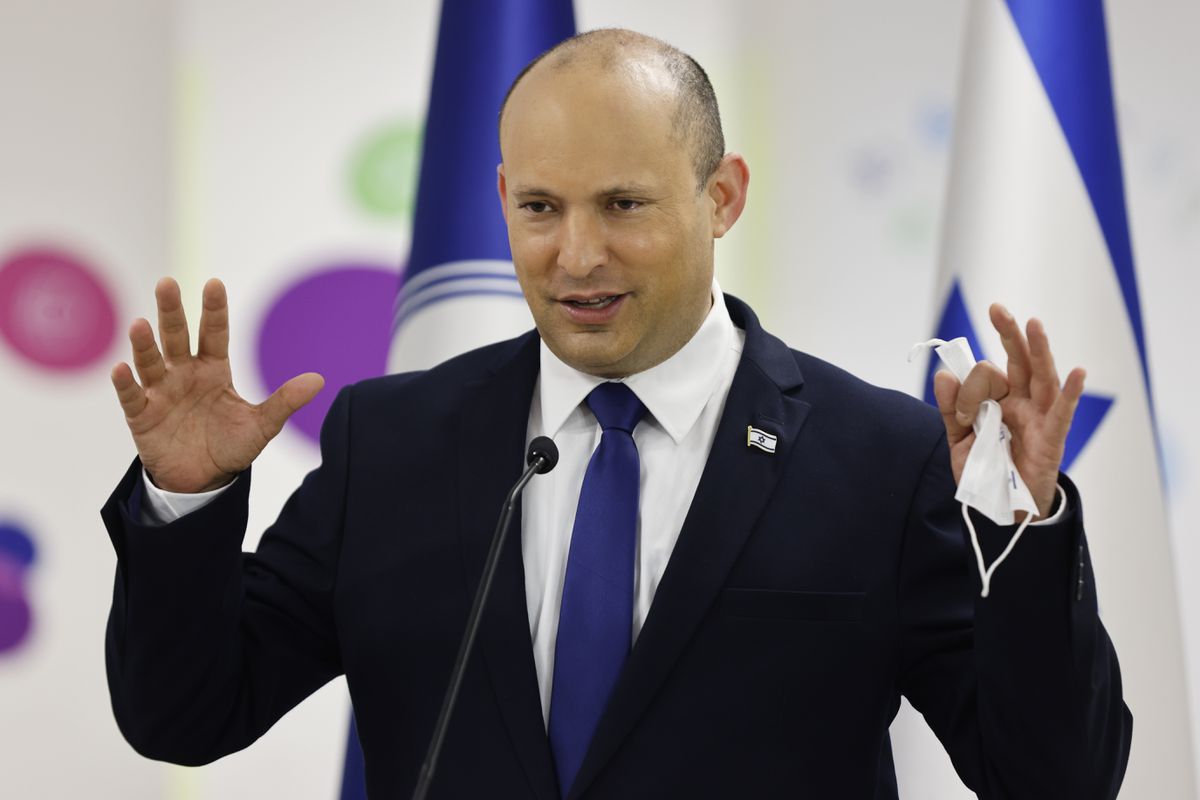 Israeli Prime Minister Naftali Bennett gestures as he delivers a statement during his visit to a Maccabi healthcare maintenance organisation (HMO) outlet which offers vaccinations against the coronavirus disease (COVID-19) in Holon, near Tel Aviv, Israel Tuesday, June 29, 2021. (Amir Cohen/Pool Photo via AP)

Israeli Prime Minister Naftali Bennett gestures as he delivers a statement during his visit to a Maccabi healthcare maintenance organisation (HMO) outlet which offers vaccinations against the coronavirus disease (COVID-19) in Holon, near Tel Aviv, Israel Tuesday, June 29, 2021. (Amir Cohen/Pool Photo via AP)

Naftali Bennett began his term as Israel’s new prime minister praising his predecessor for the successful COVID-19 vaccination program and promising more of the same: “Vaccinations, not lockdowns” has been his mantra. The pivot from state-mandated measures to personal responsibility was straight from Boris Johnson’s playbook.

Bennett will have noticed that “Freedom Day” hasn’t gone quite as hoped in the U.K. as the delta variant interferes with plans for a carefree unlocking. Now the Israeli leader is sounding a little less British too. In reality, though, the Israeli approach is just different enough from the U.K. one to allow Bennett to claim he’s both opened up and stayed vigilant.

On July 13, in a televised speech, he called on Israelis to “take responsibility” or face the prospect of a new lockdown. But he also held out a carrot: Greater care on the part of Israelis could see the threat abate within five weeks. Specifically, he asked people not to travel abroad. “Your trip will be canceled anyway, so I advise you not to even order tickets.”

Bennett’s interest in the U.K. policy was partly philosophical but largely because it stemmed from British experience with delta, which predated Israel’s by about a month. But Israelis are not like Britons, who have largely supported restrictions and abided by them. They’ve mainly ignored the prime minister and are now flying off to foreign holiday destinations in record numbers for the COVID-19 era.

As a result, the prime minister convened an emergency cabinet session and took further measures. He ordered a crackdown on quarantine scofflaws. Using Israeli technology, he ordered the police to send SMS messages that allow the force to pinpoint their movements. This program is known as “haskamon,” a Hebrew word that implies a request. The reality is less polite: Those who refuse will get a visit from police.

Working on the premise that most delta-strain COVID-19 is imported, Bennett also broadened the list of countries to which Israelis are forbidden to fly. Arriving passengers from “green countries” must pass a mandatory test at the airport and a second test four days later.

The Israeli twist on “personal responsibility” hasn’t always gone smoothly. The restrictions that Bennett promised not to impose are coming so fast that people are confused. Worse are the government’s various trial balloons. Last week, the director general of the health ministry speculated on television about a possible lockdown that would close the economy. He soon apologized, but added an ominous disclaimer: “You never know what is going to happen.”

That was followed by a public fight between a highly regarded health ministry epidemiologist — who said that it looked like school might not open in September — and an enraged minister of education who swore that it would. The following day, there were anonymous reports that the school year is, in fact, in danger. On Monday, Israelis awoke to headlines that the airport might be closing soon to all but essential travelers. After this message sank in, it was denied by the minister of health.

Predictably, such conflicting statements, has raised considerable skepticism among Israelis. Often, they don’t comport with observable reality. Since Bennett was sworn in, Israel has experienced 17 COVID-19 deaths, less than one per day. There are currently 66 hospitalized COVID-19 cases, a number that is rising slowly. Most of the vaccinated population, especially those under 60, are no longer fearful.

With such a low total of seriously ill patients, there seems to be no imminent danger that the health care system will be overrun, a major concern in the U.K. The wide-scale vaccination of children (something the U.K. has decided not to do) is also going well and expected to reduce the transmission risks further.

While many Britons fear Johnson opened up too early, Israelis are skeptical of the hard talk and unlikely to comply with further restrictions without compelling reason. As far as they are concerned, vaccinations have worked. Booster shots are being offered to vulnerable members of the population, though there is no decision on expanding that to the population more widely.

Nobody doubts the prime minister’s sincere concern for the public. But like any politician, Bennett is also concerned about his own political survival. He has, therefore, left himself options. If the British approach he embraced shortly after coming to office is successful, he can claim to be an early adopter and have done it with an Israeli twist in the form of tougher border controls and more vaccinations. If real freedom proves elusive, he can say he was quick to perceive the risks and add restrictions.

Zev Chafets is a journalist and author of 14 books. He was a senior aide to Israeli Prime Minister Menachem Begin and the founding managing editor of the Jerusalem Report Magazine. This column does not necessarily reflect the opinion of the editorial board or Bloomberg LP and its owners.