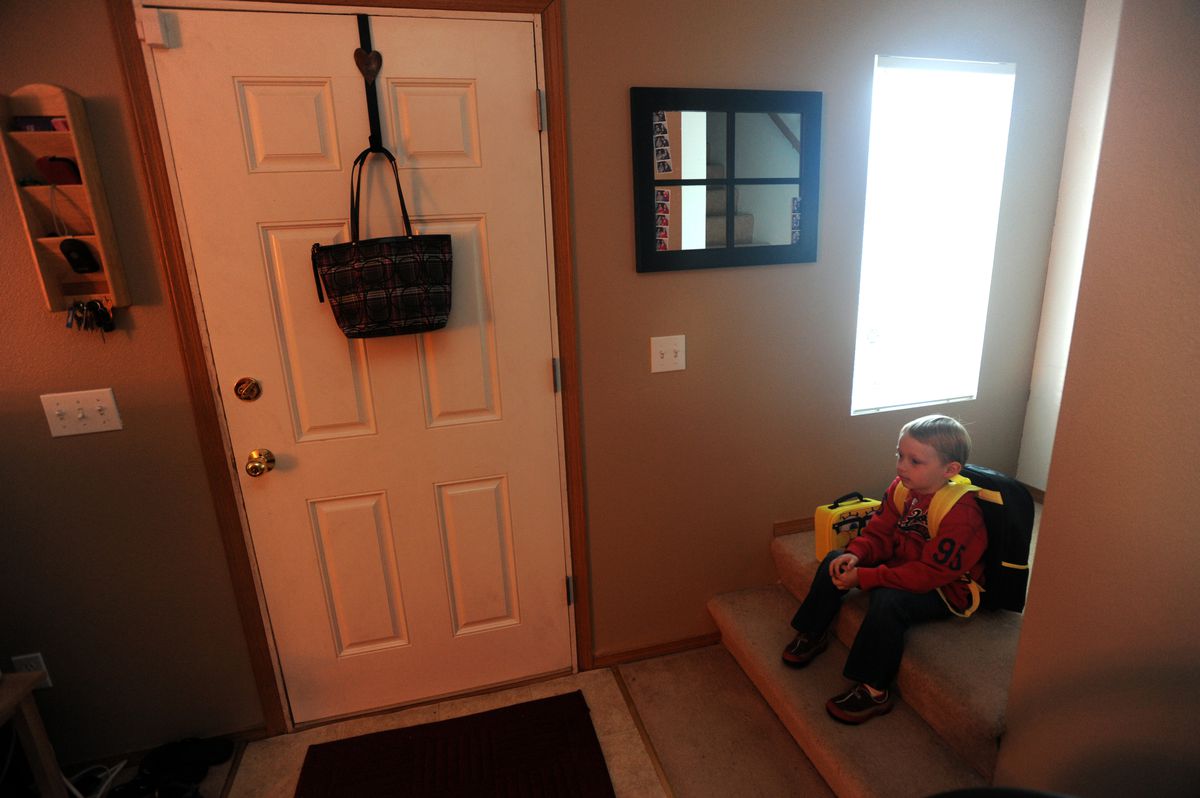 Ready to head to school, Kohl Russell waits for mom ahead of schedule for the first day of kindergarten at their home Wednesday morning August 29, 2012 in south Anchorage. (Erik Hill ADN)

Ready to head to school, Kohl Russell waits for mom ahead of schedule for the first day of kindergarten at their home Wednesday morning August 29, 2012 in south Anchorage. (Erik Hill ADN)

Kohl Russell, 5, was not convinced that the first day of kindergarten was going to be a big deal.

Still, he woke at 7:15 after a night of fitful sleep to put on the clothes he and his mother Lisa Heikes had carefully laid out the night before: a red sweatshirt, a T-shirt with a guitar on it, blue jeans and brown-and-red slip on shoes, all brand new.

He ate peanut butter waffles for breakfast and killed time watching cartoons on the couch.

On Wednesday, Kohl and 3,722 other children in the Anchorage School District began their first day of kindergarten, the dawn of an epic decade-plus trip through the public education system.

School was not new for Kohl. He had already gone to preschool at Anchor Lutheran School. This summer he had even been on a field trip to the Alaska Zoo, where he was disappointed not to see a giraffe but did see wolves that howled like his favorite animal, the werewolf.

But kindergarten was different than preschool or daycare in a few ways, Kohl's mom told him: For one, there would be no nap time. Second, he would have a desk. What differences existed beyond that were left to his imagination.

Outside he posed against the fence for pictures. He carried a SpongeBob SquarePants backpack half his body size and a matching lunchbox packed carefully with a peanut butter and jelly sandwich, Cheetos, grapes, a Capri Sun and a fruit roll-up. He went for a haircut with his dad last week.

He and his mom arrived at school at 8:45 sharp, a few minutes before the first bell. He raced for the doors of Gladys Wood Elementary School as soon as his mother had helped him out of his child seat.

Sarah Afoa's classroom was full of primary colors, large containers of hand sanitizer, cheerful signs written in perfect handwriting and chairs that rose no higher than an adult's knee.

A warm, matter-of-fact woman who has taught for 28 years and has two sets of twins of her own, Afoa bent down to clasp the hands of each child to greet them.

"I'm so happy you're in my class," she said, widening her eyes.

They could call her Mrs. Afoa, she told them.

Soon it was time for parents to leave. Kohl sat at his assigned desk reading a book about a polka-dotted bug.

"I love you," his mom said, leaning down to squeeze his shoulder.

Then she got up and slipped out the door.

Kohl rubbed his eyes and stared hard at the book but no tears came.

The longtime secretaries and teachers of the school say the first day of kindergarten is different than it used to be. A lot of children entering school now have gone to daycare and preschool for years -- maybe two-thirds of them. As a result, the first day isn't so much like jumping off a diving board as scooting into the deeper end of the swimming pool. There are fewer tears on both sides.

An announcement came on the intercom that cookies and tissues were being offered in the library for parents, but only a few took up the offer.

Kohl quickly discovered that he had a built-in friend in the class: Carter, a boy in an Angry Birds T-shirt who sat at the table next door. They had already had two playdates together, he announced to the class.

Morning was a whirlwind education in what Mrs. Afoa considered to be the basics of kindergarten citizenship.

Kohl learned to line up correctly. (Hands to yourself, eyes facing forward, mouth quiet.) He colored a drawing of an apple red and orange and turned it in with his name printed on it. He learned that the term "potty" was to be left in preschool and that flushing and hand washing were both mandatory in kindergarten. He was praised for his mastery of the preferred style of sitting: criss-cross applesauce, legs folded on the floor. He got along so famously with Carter that by 10:30 a.m. they had been separated. By 11:30 they were no longer welcome to stand directly next to each other in line. He practiced coloring and making the letter 'A.' He ate what his teacher called "brain food" -- the healthy stuff -- first at lunch and saved his fruit-roll up for last. He learned about giving silent "pinkie waves" instead of shouting hello in the hallways. He fed spinach to the two classroom guinea pigs, Roscoe and Norman, by dropping it on their heads. He spun his arms during "The Wheels On The Bus Go Round and Round" in music class. He ran until he was pink-faced and sweaty in P.E. class.

By 2 p.m. the kids had gone floppy and elastic. Kohl maintained strict criss-cross applesauce sitting style, but others lolled on the ground. An hour later Kohl asked when his mom was coming to pick him up. But he was swiftly distracted by the squeaking guinea pigs.

As the day ended, he decided that he liked kindergarten and planned to come back on Thursday, he said.

But when he saw his mom again the first thing he would do was hug her.