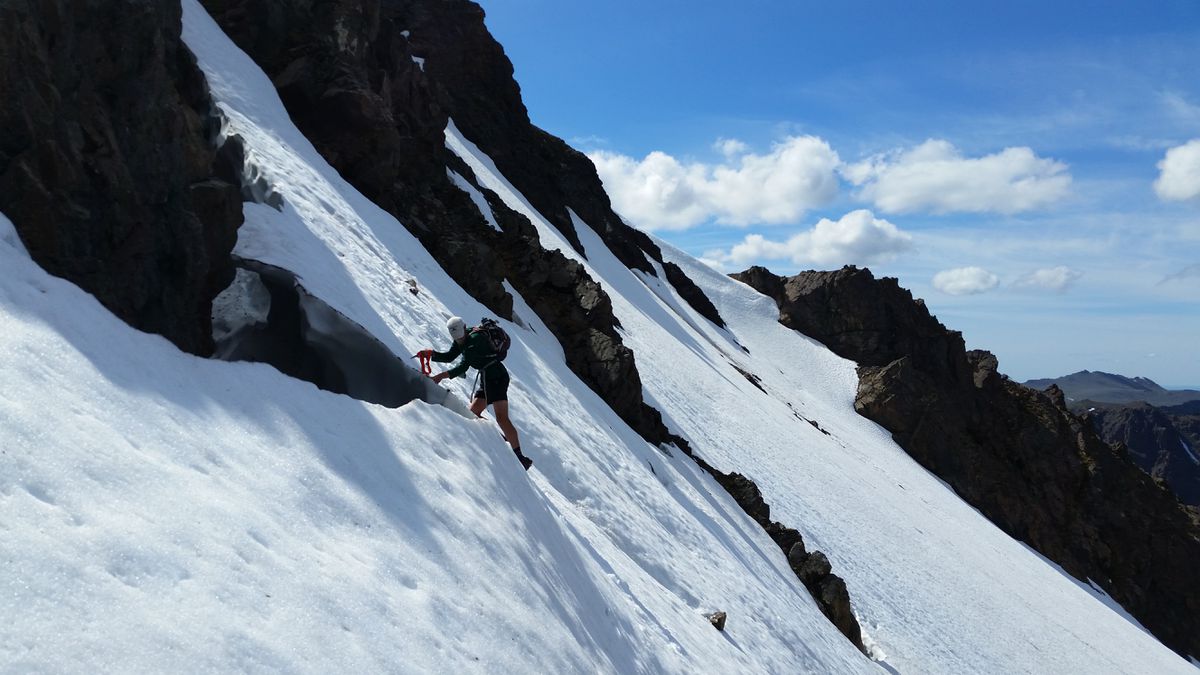 With Mount Marathon fever about to grip Southcentral Alaska, a couple of the state's top mountain runners warmed up for the famous race by venturing out one day last week for a mountain marathon.

The key words in that sentence: One day.

Harlow Robinson and Matias Saari set an unofficial speed record by bagging the dozen summits in what's known as the 12 Peak Challenge, or the Chugach Front Linkup, in a little more than 22 hours.

The goal is to summit the 12 highest peaks in the Front Range of the Chugach Mountains, all of them higher than 5,000 feet, in one continuous push.

Robinson, a two-time Crow Pass Crossing champion, and Saari, the 2009 Mount Marathon champion, started their quest a week ago Wednesday at 5:17 a.m. at the Rabbit Creek trailhead.

They finished at 3:27 a.m. Thursday at the Stuckagain Heights trailhead.

"We had a beer, a little pizza, and then went home," Saari said.

The post-adventure celebration may have been low key, but the climb itself was epic.

In a span of less than 24 hours, Robinson and Saari stood atop a dozen peaks that rise 5,000 feet or more in the mountains that provide Anchorage with a stunning backdrop on the east end of town.

The men are still waiting for final numbers from the GPS data in their watches, but Saari estimated they covered at least 32 miles with 21,000 feet of vertical gain.

They did it in 22 hours, 10 minutes, taking 30 minutes off what had been the previous unofficial record — J.T. Lindholm's 22:40 in 2008. Though they didn't tarry, they made time to take photos and enjoy the scenery.

"The record wasn't really a goal," Saari said. "We just wanted to have fun and take care of ourselves and move with purpose and see how long it took.

"We intentionally skipped one big snow field in the 18th hour. If it had been in the third hour we probably would have taken it, but we were fatigued and needed to be more cautious."

All in a day’s work

Robinson, 49, and Saari, 45, work together at the Alaska Sports Hall of Fame, for which Robinson is the executive director and Saari is an event coordinator for the Healthy Futures program.

Instead of going to the office on Wednesday and Thursday of last week, they went into the wild.

It was a warm day, which was both good and bad. The weather softened the ice, which made for safe traveling, Saari said.

But the heat left them parched on two long occasions when they ran out of water.

"We were a little light on water and didn't find as much as we would have liked," Saari said. "We ran out twice for several hours on a pretty warm day.

"It wasn't awful, but it was definitely on our minds, and rationing water when you're thirsty isn't a good thing."

The pair had two big scares, one early in the journey and one near the end.

The first tense moment came when they were traversing the ridge of North Suicide Peak — their second summit — and Saari's backpack got stuck on a rock.

"He was trying to maneuver down a little gulley and his backpack got hung up on a rock," Robinson said. "I had to get down below him and hold his pack as he unhooked it and took it off.

"We were really exposed there. We just kind of caught our breath because it felt a little ominous.

"The Chugach Mountains are just rotten rock, and it's a little nerve-wracking when you're on exposed area. You don't want to make a mistake. One slip and it's bad news."

The other sketchy moment came less than an hour from the completion of their trip. They had reached the their final summit — Temptation Peak — and were in Snow Hawk Valley when they encountered a female grizzly bear with two yearlings.

"I came over a rise and they were right in front of me maybe 100 yards away," Robinson said. "They were in the tundra running around in a circle, playing.

"Matias was behind me and he had the bear spray, and I was kind of frozen in place. I yelled, 'Get out your bear spray.' They heard me yell and they took off running right down the valley where we needed to go.

"It's a valley of undulating hills and brush and rocks that look just like bears at 2 in the morning. So we changed our route and did way more sidehilling than we wanted to at that stage."

Not long after that, near the base of The Dome, they saw three more brown bears. Again they adjusted by taking a less direct route, Robinson said.

Route-finding is the key to the Chugach Front Linkup, said Robinson, who in 2010 did the 12 peaks by himself in a time of 22 hours, 42 minutes.

There is no trail that leads from one peak to another, and no set order to follow. Robinson lives near the Rabbit Lake trailhead so he and Saari decided to travel south to north.

"We had a lot of little five-minute mistakes here and there," Robinson said. "So many times it's the classic mountaineering decision — staying high versus descending and skirting around. Sometimes you just get it wrong. For the most part, we did a good job of finding the best route."

A Challenge few have taken

Shawn Lyons of Anchorage, the writer of three volumes of the "Walk-About Guide to Alaska," is the first known person to do the 12 Peak Challenge. In 1990 he made the journey in a time of 27 hours, 30 minutes.

Since then at least another 10 people have completed the climb, including Robinson twice, according to mountain guide Joe Stock of Anchorage, who keeps a list of known Chugach Front Linkup climbs.

No one duplicated Lyons' achievement until 2006, when Stock and Trond Jensen broke the 24-hour mark.

In the summer of 2008, Lindholm made his solo trip and Rob Develice and Charlie Thomas did it as a team. Robinson made his run at Lindholm's record in 2010, and in 2012, Abby Rideout became the first woman to complete the trek, finishing in 29 hours with her husband, Stephen Rideout.

Three people have done it this summer — Aaron Thrasher, an accomplished rock climber, made a solo trip in 27:22.

"It isn't for anyone to go out and do on a whim," Saari said. "This is serious rock scambling. There are literally hundreds of places where if you fell, you'd be seriously injured. You have to be comfortable with rock scrambling and deep snow travel."

Next up: Mount Marathon

Both men finished the trip tired but relatively unscathed, although Robinson said he expects to lose a couple of toenails.

Both are entered in Monday's Mount Marathon race in Seward — a thrilling run up and down a 3,022-foot mountain. Neither expects to crush it, because both expect to be recovering from their marathon in the Chugach Mountains.

Saari called the adventure a blast, and then qualified that assessment.

"The first 17 hours was a blast but the last five were pretty tough," he said. "But it didn't away from the whole experience. You expect to suffer."

Robinson said he never expected to do the 12 Peaks Challenge twice and said there won't be a third time.