This Canadian just swam by riverboard nearly 2,000 miles down the Yukon River 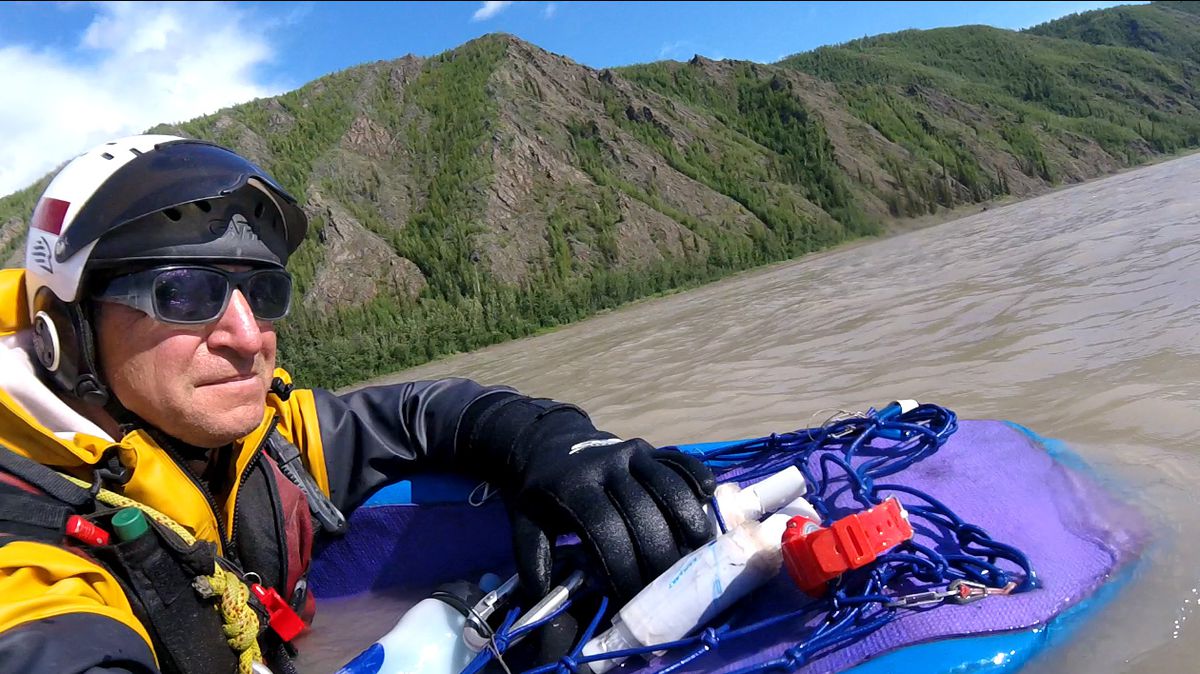 Denis Morin swam, with a riverboard, from Whitehorse, Yukon, to Emmonak, Alaska, near the Bering Sea, between May 25 and Aug. 9, 2016. (Denis Morin)

Denis Morin swam, with a riverboard, from Whitehorse, Yukon, to Emmonak, Alaska, near the Bering Sea, between May 25 and Aug. 9, 2016. (Denis Morin)

A few days ago, at the end of a summerlong journey in which he navigated nearly the entire Yukon River without a boat, Denis Morin was overcome by all he was and all he had been through.

The French-Canadian traveled the river from Whitehorse, Yukon, to the mouth in Alaska by riverboard. The bright blue board is a little more than half his height in length, and looks something like a boogie board with sides. He kicked and sometimes stroked for almost 2,000 miles. He encountered big rain and hail, headwinds and whitecaps, two grizzly bears and an errant salmon.

And he did it alone.

Morin, 54, calls himself a swimmer. More precisely, he is a riverboarder, an athlete in an emerging sport of swimming aided by a floatation board and fins. Thousands of people around the world do it, said Morin, who is part of the World Riverboarding Association. Most are thrill-seekers in whitewater with extra protective gear. The Yukon was for distance.

After 75 days and almost 2,000 miles, on Tuesday he rose out of a slough at his destination: the Southwest Alaska fishing village of Emmonak, near the Bering Sea at one of the Yukon's mouths.

There, local salmon roe man Jim Friedman heard that a stranger had just arrived. He went to the dock by the fish plant to see if the man needed help.

Don't have one, Morin answered.

"Where's your kayak then?"

Morin didn't have one of those, either.

"Then how'd ya get here?" Friedman wondered.

A first for the Yukon

Canoeists, rafters and other explorers have tackled the Yukon before. But residents of river villages say they don't know of anyone else who traveled Alaska's longest river without a boat or paddle.

"We see canoers all the time but this is the very first time anybody even attempted to swim like that, swim that far anyways," said Paul Larson of Russian Mission, who encountered Morin there.

Morin took on the adventure with lots of experience, two gear-stuffed inflatable waterproof packs and a desire to reset himself.

Morin, a French-speaker from Quebec City, retired earlier this year from a high-pressure information technology career. He sold everything. He wanted to start anew.

On this solo expedition, he set out to shed that workaday world and open a chapter of travel, enjoyment and adventure.

"I think it was more about changing my rhythm of life," Morin said.

He had big trips behind him, among them riverboarding the wide George River in northern Quebec, a monthlong solo journey on the dramatic Nahanni River in Canada's Yukon and Northwest territories, and a group trip in Nepal.

His Yukon trip may be the third longest riverboarding adventure on record. A Swiss man, Mike Horn, holds the record, for a 1977 journey down the Amazon River and a French explorer, Remi Camus, in 2014 went about 2,700 miles down Southeast Asia's Mekong River.

For the Yukon, Morin took 130 pounds of gear, including fuel, a stove, dehydrated meals, a tent, rainwear and a small computer.

He crafted his own riverboard of dense foam covered in fiberglass with an angled front. It was flat on the bottom, so as not to catch wind, which he knew would be a significant issue from his experience in northern Canada.

He cut and pieced together multiple topographic maps into strips many feet long that he laminated and rolled like scrolls.

"I am someone good in mathematics. You must calculate the angle and the speed. I know quite precisely where I am all the time, if I refer to my maps," Morin said.

'Into the river alone'

On May 25, he began in Whitehorse, in Canada's Yukon Territory, downstream from the river's source but where most long Yukon treks start.

Around 6 a.m., he hugged a friend there to see him off. He eased into the water, emerald-colored there before it turns gray. He emailed his grown children.

He didn't call any attention to what he was attempting. He didn't want to become a target for doubters, critics and haters.

"I just go into the river alone," he said.

He wore his fins and a helmet, a life vest and a wetsuit that fit snug at the start. By the end, he had dropped 40 pounds. The suit no longer fit tight, and it no longer kept him as warm, since more water could seep in.

His start was his hardest ever. Just north of Whitehorse, he came up on frigid Lake Laberge, more than 30 miles long and a main element in the Robert Service poem "The Cremation of Sam McGee" about a man with "awful dread of the icy grave."

On the lake, it stormed. Hail stung his body. A headwind made it hard to get glide. A canoeist pulled onto the shore, unable to go on.

Morin wasn't yet used to long days and cold water so it took a slow week to cross the lake. He didn't want injuries, to show up at the end as the guy who did it despite a broken leg. He wanted "a wonderful life experience."

He soon averaged 25 to 35 miles a day when the weather was right. He aimed for the Yukon's deeper main channel, the faster water for efficiency and speed.

He hauled the gear in two waterproof bags. On calm spells, he inflated the bags and pulled them along on top. But when the weather worsened, he let the air out so they rode low and out of the wind.

He filmed himself with his GoPro, sometimes letting it float on driftwood alongside. He carried a SPOT personal tracker so friends could follow his virtual course. He could have used it to signal for help but never needed to. In towns with state troopers, he dropped by the post so if he disappeared, they would know where he had been.

He collected water from the river and creeks that he boiled and filtered. He never got sick.

The first stretch of river passed remnants of Gold Rush history, including old dredges and buildings.

'We will find your dead body on shore in some months'

Across the U.S. border in Eagle, Morin checked in with U.S. Customs through a designated phone. He stayed one night in a public use cabin near there, just one of two cabin nights on his whole trip.

In Alaska, the Yukon widens into a labyrinth of channels and "1,000 islands," Morin said.

"You cannot go there," an elder in Circle told him. Navigation was too treacherous. No one should try it without GPS, the elder said. "You go in there like that with your little fins, we will find your dead body on shore in some months," Morin remembers being told.

But with his papyrus of topographic maps, Morin felt confident he could stick to the main stem and not die trapped in a dead-end.

He had planned to take three or four days to reach the next village, Fort Yukon. With good weather, he sliced through that stretch of river in a day and a half.

Onshore just outside the village, he made a little mistake. During a calm spell he set his $400 rain jacket over some gear and "in a minute a windstorm arrived and took my shell." The rain shell floated up like a feather, swirling about. Then it landed on the river. He grabbed his wetsuit to jump in for a jacket rescue. But it sunk and disappeared.

He bought a heavy fisherman's rain jacket in Fort Yukon and asked for word to get back to Circle that he had made it. He made another jacket out of a tarp, bungee cords and duct tape, so that he would have a dry one for camp.

Toward Galena, he swam for hours in the wind behind a barge headed the same way. He had a beer in the bar there, met the barge captain. It was the only bar he saw.

He bought Sidney Huntington's book "Shadows on the Koyukuk: An Alaskan Native's Life Along the River." It became his bible, his guide to the people.

Children in villages were curious but he was surprised most didn't know how to swim. They didn't get in the water with him and didn't want to try his board.

He saw many moose and a couple of brown bears. They weren't interested in him, and he doesn't fish or hunt. But salmon ran so thick in the Yukon they bumped his legs. One wedged itself between his body and his board.

"Finally I just dip my board a little bit and he go away," Morin said. "It was my only catch and I didn't eat it."

All along the way, village residents and boaters were surprised to see the Yukon swimmer.

"Some people were thinking I was a bear. Some others, thinking a moose," he said. And some thought he was someone in trouble.

Larson, in Russian Mission, was with his cousin working on the porch of the house he is building near the river.

"He stopped by and he told us where he swam from, where he was going, and how long it took. We couldn't believe it. We thought he was crazy," Larson said.

But as Morin shared more of his story, Larson said, "we realized he didn't seem that crazy."

Larson provided Morin with some water and took him to his in-laws to charge his computer.

Back on the river, storms rolled in from the Bering Sea, creating 9- and 10-foot swells. Whitecaps crashed. He rode up waves, then over the other side, struggling with his bags of gear. In the worst of it, his GoPro was lost.

'Realizing all the trip I made'

In Mountain Village during the first week of August, his last stop before the dayslong final push to Emmonak, Morin met with a group of men and felt a fast connection. Residents walked down to the beach to see him off. It was sunny. People hugged him.

In his book, Huntington had described how the community gathers to see someone important off. Morin flashed on that, overwhelmed. The kindness of  people nourished him, he said.

"It was for me like 'you give so much. You give me so much — all the people on the river,' " Morin said.

For the last few days, he kicked along enveloped in gray. The sky and the river blended into each other.

And then he was in Emmonak.

"DONE," he posted on Facebook over a map of Alaska and the Yukon. People started congratulating him in English and French.

Morin was invited to a Bering Sea beach cookout with seal and king salmon, then rode along on a seal hunt. The hunters were successful.

He caught a boat ride with Kwikpak, the fish plant operator, to backtrack to St. Mary's and from there took a plane to Anchorage.

He stood on the bow and cried as they passed the same scenes he had experienced down low on the river's surface. The boat ride took a few hours, but on his board it had taken him a few days.

"When I was on the boat with quite big speed, I was realizing all the trip I made, and all the land and the wide, big dimension of the river."

He did something new for himself, and new for the river.