Why buying your partner a handgun can pose problems 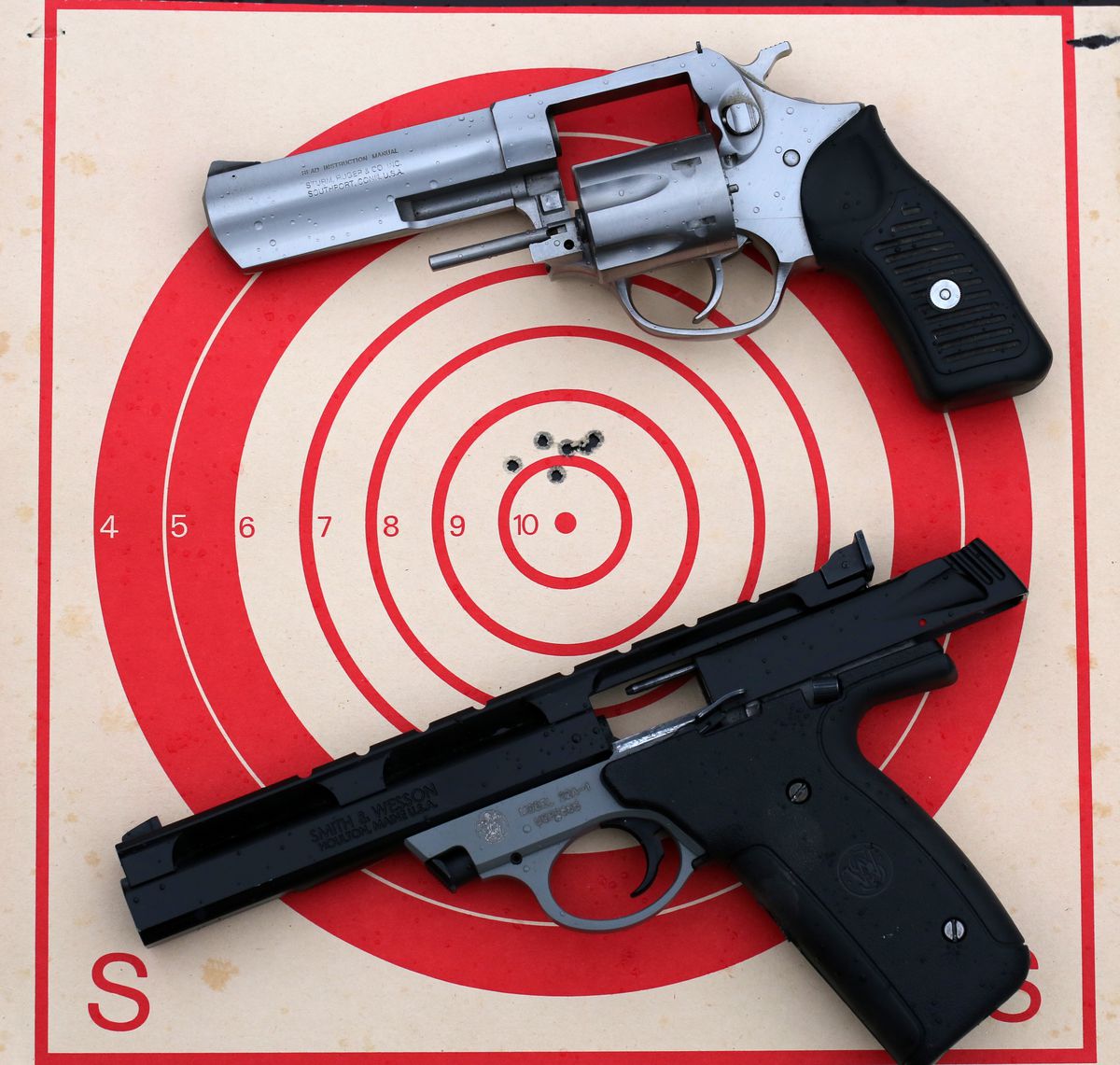 The woman walked through the open doors holding the hard plastic case away from her body, as if rattlesnakes might burst from its seams at any moment. She set the offending case on a table at the introductory shooting class and stepped back.

"Let's see what you have in there," I said to her.

She gave me the "are you talking to me" look, and I nodded. Opening the case revealed a large-frame, 6-inch-barrel, double-action revolver chambered for the .44 Remington Magnum cartridge.

Gingerly, she picked up the big handgun with a finger and thumb at the small of the grip frame and handed it to me. Seeing that the pistol had been fired a fair amount and expecting her answer, I asked, "Have you shot this gun a lot?"

"I've never shot it," she replied.

The subsequent conversation revealed that her husband brought the handgun home for her after she expressed interest in having one for protection against marauding bears and burglars.

Never mind that she was unable to maintain a firing grip and still reach the trigger to press it properly.

Smiling to myself a bit I asked, "Does he shoot this gun a lot?"

This story is routinely played out and I have firsthand knowledge, being guilty of the transgression myself. Those of us who love guns can never seem to have enough — the key word being "have," not need. So in a rather shameless manner, we use all sorts of subterfuge to bring more of them home. We hide them, make up stories about deals too good to pass up, or maybe we are just "testing" it for a friend.

And we buy guns "for" our partners, knowing that eventually he or she will forget or, as time passes, forgive. Then we'll have more guns. This isn't gender exclusive but practitioners of the art of gun accumulation tend to be male.

So when our soul mate expresses an interest in a gun, we justify buying what we want instead of what they might want, thinking that they probably won't really shoot it anyway, and then we'll have a good gun for ourselves.

While this practice provides another gun, it usually assures the person for whom the gun was intended will not become a shooting buddy. We cheat ourselves out of advancing a relationship with our favorite person while cheating that person out of a useful tool and skill.

Handguns are very intimate firearms. They are intended to be a constant companion, a working tool used under stressful conditions and the relationship with them must be comfortable. They are also the most difficult of the primary sporting weapons (shotgun, rifle, handgun) to learn to shoot well.

The short sight radius (distance from rear sight to front sight) contributes, leaving minimal margin for error. A slight misalignment, even when shooting at the close ranges typical for handguns, will cause an errant shot.

Most folks can master sight alignment pretty well. Poor handgun shooting can usually be traced back to the trigger press.

Trigger press is crucial to all shooting but like sight alignment, the short handgun barrel is unforgiving of any movement when the shot is fired. That's the reason the introductory handgun should be one that fits a novice shooter's hand. It should be uncomplicated to operate and of a caliber that produces the minimum in recoil and noise.

In spite of what tough guys would like you to believe, when something explodes in your hand it causes a certain level of consternation — and that's essentially what handgun shooting entails. The larger the caliber, the bigger the explosion.

New shooters are exposed to heavy recoiling, a loud sound (consider high-quality ear protection, even the .22 rimfire handgun has a sharp report), and with an ill-fitting handgun, the first shot fired hurts. That scares any new shooter. No matter how precisely you have coached the trigger press, subsequent shots will include the "pre-ignition push" — better known as a "flinch." In anticipation of the explosion, the shooter yanks on the trigger, the shot goes wild and frustration begins.

A lifetime of instructing folks in the use of handguns and, some would say, a misspent life hanging out on firing ranges has consistently shown that the first experiences with handguns set the stage. A bad first experience can mean months or even years trying to get past yanking the trigger. Or, more likely, the new shooter will just abandon further thoughts of owning a handgun.

I'd estimate only one in 10 handgun owners shoot them well enough to be useful for their intended purpose. Maybe one in 50 are really competent and one in 100 shoot them exceptionally well.

It doesn't have to be that way.

Instead of the .44 magnum you may want, consider getting your new shooter a .22 rimfire revolver or semi-automatic pistol. As appealing as surprising someone with a handgun under the Christmas tree may be, it probably isn't a great idea unless you've taken the time to go around and let that person hold different handguns to check for fit. When a good-fitting handgun is found, be prepared to explain the intricacies of operating it and devoting lots of time to learning to use it.

Consider that no one is comfortable performing an activity that scares them. That alone makes them dangerous to themselves and others — the opposite of the intended purpose.

Assess your own abilities and level of experience with a handgun before taking on the task of instructing your partner. It is quite rare for one half of a couple to instruct the other half successfully. Consider a professional instructor for the initial introduction.

Perhaps the best advice for introducing someone to shooting a pistol would be forgetting the handgun and starting with a .22 rimfire rifle. Teach the newcomer the nuances of gun handling, safety, trigger press, sight picture, etc. with a gun as inoffensive as it can be. The subsequent introduction to the handgun has a much greater chance of being a positive experience.

The handgun is a magnificent tool in the hands of an individual who has taken the time to go through the process of learning to use it correctly. Anything less leaves the pistol as a liability or a very expensive paperweight

Steve Meyer of Soldotna is lifetime Alaskan and an avid shooter. He'll be writing every other week about guns and Alaska hunting. Contact Steve at oldduckhunter@outlook.com