When Alaska gets cold and wet, ensure your hunting dog is protected 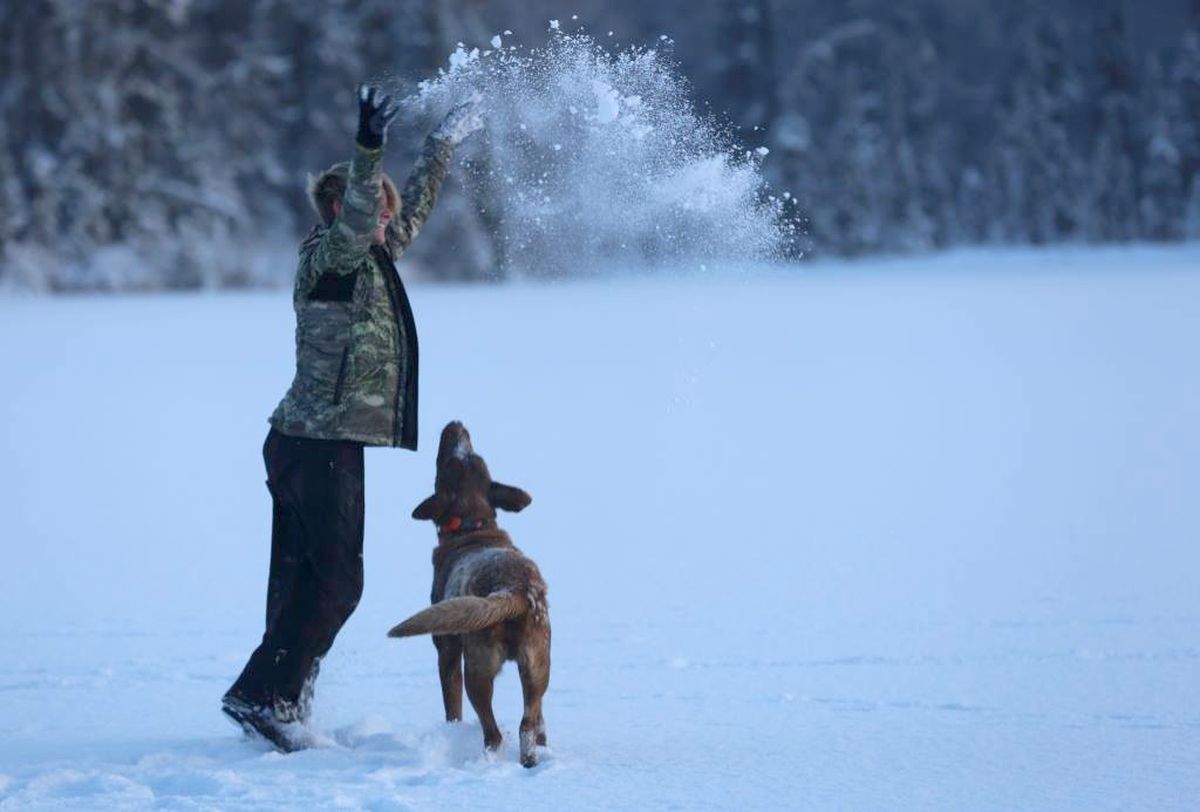 Jack, an older chocolate Labrador, plays with Christine Cunningham in the snow. (Photo by Steve Meyer)

Jack, an older chocolate Labrador, plays with Christine Cunningham in the snow. (Photo by Steve Meyer)

The snow above timberline changed from the type of powder preferred by skiers and English setters to a thin crust we broke through with each step. It meant more work for us but, worse, it was cutting the front of Winchester's legs. Just when we decided to turn back, Winchester, our English setter, went on point. He was 300 yards away, across an avalanche.

"We have to honor his point," Steve said.

One of my biggest concerns about upland bird hunting with English setters is foot care. Many of today's sled dogs are a genetic mix that includes some gun dog breeds, such as the English pointer and Irish setter. If the dogs are not keen on wearing booties (mine are not), a form of barrier wax, such as Musher's Secret, prevents snowballing and abrasion.

Any athletic dog faces many of the same demands as hunting dogs, although not all breeds are the same concerning cold-weather requirements. Living and hunting with both Labradors and English setters has shown me the difference between single and double-coated breeds and how they endure cold weather.

While English setters bred for hunting have less hair than the "show" type of setter, their fur is still long and fine enough to collect snow. The setters have a single coat (no undercoat) unlike the Labradors, who have a double coat that acts as an insulating layer that protects the dog from cold and wet environments.

Cheyenne, one of our chocolate labs, has no trouble sitting motionless for hours in freezing weather or swimming through 19-degree water. The setters get cold when stationary but stay warm while running. However, after Hugo, a setter, had taken a single dip in the water chasing a songbird, the rest of the day was a fight to keep his feet warm and free of ice.

Labradors also have webbed toes, which act as snowshoes, whereas setters tend to collect snow in the fur between their foot pads, which we trim in the winter months. A field cut is an all-over trim that leaves the guard hairs on the dog's chest and underside intact, which helps to minimize snowballing in winter.

In addition to using Vaseline on the foot pads, applying coconut oil to the fur helps keep snow from collecting on the dog's "feathers," the feathering of its coat on the back of the legs and tail. We also pack a pair of pliers in our field kit to break up larger snowballs. On backcountry days, we keep towels and blankets in the vehicle to dry and warm the dogs after a long day in the field.

Supplementing a dog's diet with vitamin E aids in the repair and maintenance of their skin, coat, and foot pads. All of our dogs love a tablespoon of coconut oil as a morning treat, and it serves as a good supplement for a dry winter coat.

Hunting dogs burn more calories in a day outdoors in the cold than they would in warmer weather. We feed our dogs more, but because setters are deep-chested breeds prone to stomach binding, we make sure they do not eat too much just before a big day and feed them again only after they have rested first.

Make sure your dog drinks

The same focus that causes Hugo to jump in glacial water after a bird or ignore the discomfort of snow piling in his feathers, also makes him ignore an offering of food or water. Smaller snacks are more appealing than a dish of food.

Some hunters "bait" the water or train their dogs to drink from a water bottle to ensure a dog will hydrate, which is important in cold weather when a dehydrated dog is more susceptible to hypothermia and frostbite.

The opening of the trapping season is an important date for those who hunt upland birds or anyone who takes their dog on outdoor adventures in Alaska. After Nov. 10, we avoid areas known to be used by trappers but also pack wire cutters for snares and a 5-to-6-foot section of 8-mm rope to release the dog from a conibear trap (also referred to as a "body grip" trap).

In addition to the above, any time we are in the backcountry, we pack an emergency kit that includes items to cut or clamp off bleeding, staple and disinfect wounds, wash out eyes, and remove quills. Items include antibiotics, athletic tape, a stapler, needle and thread, Rimadyl (a high-strength pain reliever for dogs), hemostats, thermometer, harness, super glue, moleskin, nail clippers, styptic powder, and Betadine.

A few weeks ago, we heard Winchester, our oldest English setter, yelp when he was out of view. We were about three miles into our hike in snow-covered mountain terrain. We called him in and watched him closely. He seemed to be moving stiffly and then we noticed blood spots in his tracks.

My friend, Kristy Berington, an Iditarod musher and dog lover, has offered some of the best advice for caring for dogs in any weather: "Know normal to spot abnormal." Often noticing how a dog's gait has changed or a difference in movement can help detect problems long before they cause irreversible damage.

We called Winchester in early that day despite his finding birds, and we later discovered he'd cut the inside edge of his foot pad. We had to rest him for a few weeks, which gave our other setters an extra chance to go into the mountains.

On rainy days we took Cheyenne, our youngest Labrador, out to hunt ducks. Lately, the weather forecast and snow reports suggest which dog we should take "wetland or upland" hunting.

One of the things I love most about bird dogs is their ability to make any weather more enjoyable. More than once, I have found my shoulders hunched in my collar and look at the dogs to see their feathers blowing in the wind or tail wagging, and I think to myself, there's nothing warmer than their company.

Christine Cunningham of Soldotna is a lifetime Alaskan and avid hunter. On alternate weeks, she writes about Alaska hunting. Contact Christine at cunningham@yogaforduckhunters.com