More Alaska women are getting into hunting 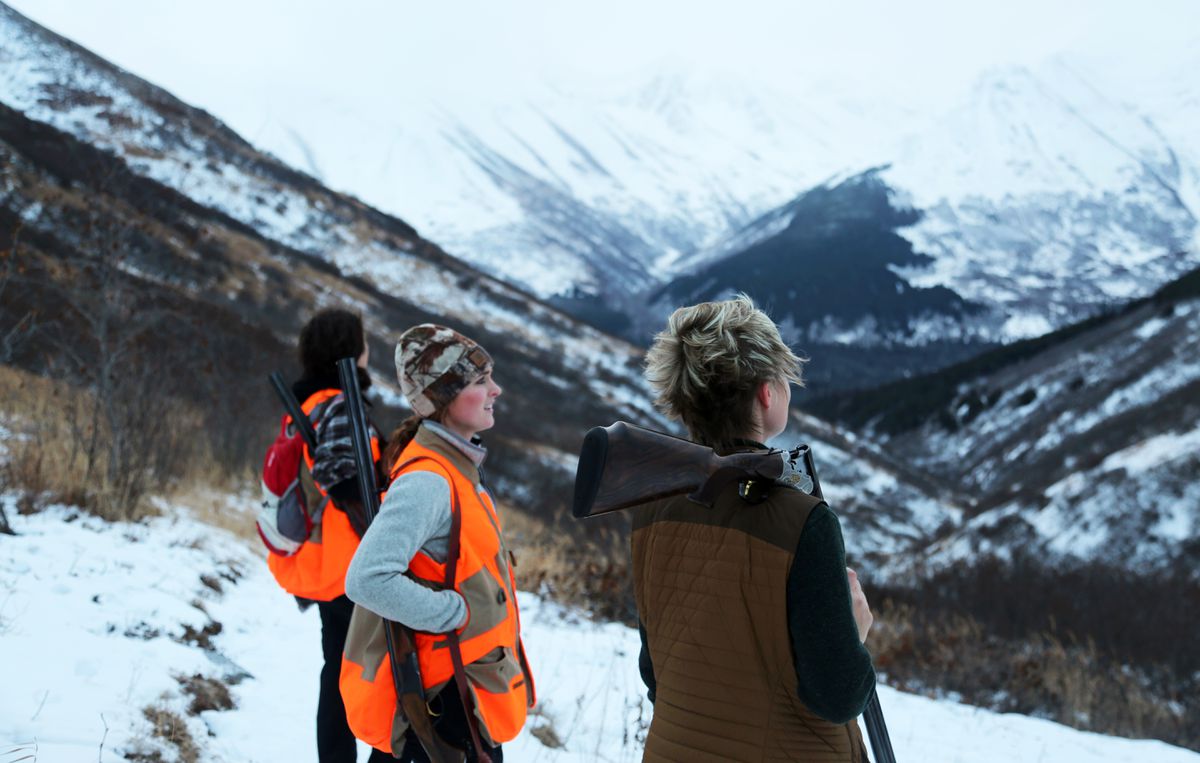 Women hunters new to upland hunting join Christine Cunningham, right, in searching the Kenai Mountains for ptarmigan in 2014. In Alaska, females purchase roughly 20 percent of the total resident hunting licenses issued in the state, making one in five Alaska hunters female. This number represents a higher percentage of female hunters than the national average of 11 percent. (Steve Meyer)

Women hunters new to upland hunting join Christine Cunningham, right, in searching the Kenai Mountains for ptarmigan in 2014. In Alaska, females purchase roughly 20 percent of the total resident hunting licenses issued in the state, making one in five Alaska hunters female. This number represents a higher percentage of female hunters than the national average of 11 percent. (Steve Meyer)

A friend asked me about hunting because she wanted to provide her son with wild game to eat. She had chosen to raise her child in Alaska so they both would have opportunities to spend time outdoors, connect to the natural world and "hunt and fish."

She was raised in a city and had never hunted, but this past summer, she signed up for Alaska Department of Fish and Game's Becoming an Outdoors Woman and Hunters Education courses as a single mother interested in the outdoors, organic food and self-sufficiency.

She's not alone. The number of women who hunt in Alaska is on the rise, with roughly one in five resident Alaska hunting licenses purchased by females. And the number has climbed from 19 percent in 2011 to 21.6 percent in 2014, the last year for which license data is available.

Licenses aren't the only numbers on the rise. Alaska's hunter education program has seen a sharp increase in participants as well, particularly women. According to program coordinator Ginamaria Smith, 16.3 percent of the 1,138 students who completed the course were women back in 2003. A dozen years later, 27.7 percent of the 3,292 participants were female.

Why so many? Smith credits the significant role of hunting in Alaska and the willingness of people here to share advice on how to pursue, harvest and cook game.

"Women have been encouraged to participate," Smith said. "The benefits of spending time outdoors, trying new things and eating wild game meat are a draw."

The trend of more and more women afield hasn't stemmed an overall decline of hunters nationwide (Alaska bucks the trend, with 103,435 resident hunting licenses sold in 2015, up 16 percent in the last eight years), sparking questions about what motivates female hunters. One thing I've noticed is that women hunters focus less on the recreational aspect of the sport and more on relationships and hunting for food. Hunting often provides a way to spend quality time with family or a partner — as well as bring home something for the dinner table.

My friend did not have a father or partner who taught her to hunt, so her emphasis was on whether she was able to kill and clean an animal on her own.

She felt good about eating meat, if the animals were fed and treated well, according to the food label. But she wasn't as sure about how to be a responsible hunter.

We talked about respect for life and the loss of wildlife habitat when land required by wild animals is used for agriculture or industry. She never once asked me if hunting was fun.

There's no doubt our culture has changed in the last 50 years. Most Americans live in urban areas and lack a firsthand relationship with nature — much less the ability to obtain food from sustainable sources. Most of us go to the grocery store and believe that, by doing so, we aren't consuming wild game. However, each human footprint has contributed to the devastation of wildlife habitat — whether we have actual blood on our hands or not.

Bunny Swan, a culture bearer for the Dena'ina Athabascan culture, was born and raised in Kenai and tutors young people about traditions and the value of a subsistence way of life. She shared a lesson with me she discovered as a child. These days, she teaches it in her classes, asking students, "Who made your breakfast?" Most answer, "My mom!"

She paused and gave me a bright smile while I waited for her lesson.

"What if I told you," she said, "that 300 people made your breakfast." I could almost hear the astonished reaction of her classroom as I understood her point. She then traced the origin of a bowl of cereal from a faraway farm to the shelves of a grocery store. Among the "300 people" she thought to include were farm workers, box-makers, drivers, stockers, clerks and checkers.

[A closer look at the Becoming an Outdoors Woman program]

When I asked an online group of female hunters in Alaska about their hunting preferences, most responses focused on variety or availability of game. Autumn Otts, for instance, likes both small and big game hunting because it broadens her food variety, her "main goal in hunting."

For Becky Black, waterfowl motivated her to try it for the first time. "For me, I think starting off with waterfowl is a good beginning point," she said. She first attended a Becoming an Outdoors Woman workshop to gain confidence and enough experience to hunt on her own.

"I would say I make my hunting choices based more on where and when rather than the size of the animal," said Morgan Marie Aldridge. "Up here, it's mostly just getting out and hunting," she said.

Andrea Lowe Radford agreed. "For me it's about being out, away from civilization. What we target is based on what is available, and when we are available to go after it."

For each hunter, the meaning of a hunt develops over time, molded by how we were raised and how we've lived since then. When we do it respectfully, hunters take part in something that is not a right as much as a rite. It connects us to the realities of nature and life, challenges us to accept greater responsibility for our environments and provides us with food. When we obtain food firsthand, we learn where it comes from and our effect on the land.

I don't know if my friend will become a hunter, though it's clear that more and more mothers, daughters and sisters are taking to the field. We all come to different conclusions, but what we have in common is a shared responsibility for the future of wild game and wild places.