The making of an Alaska fat-tire fanatic 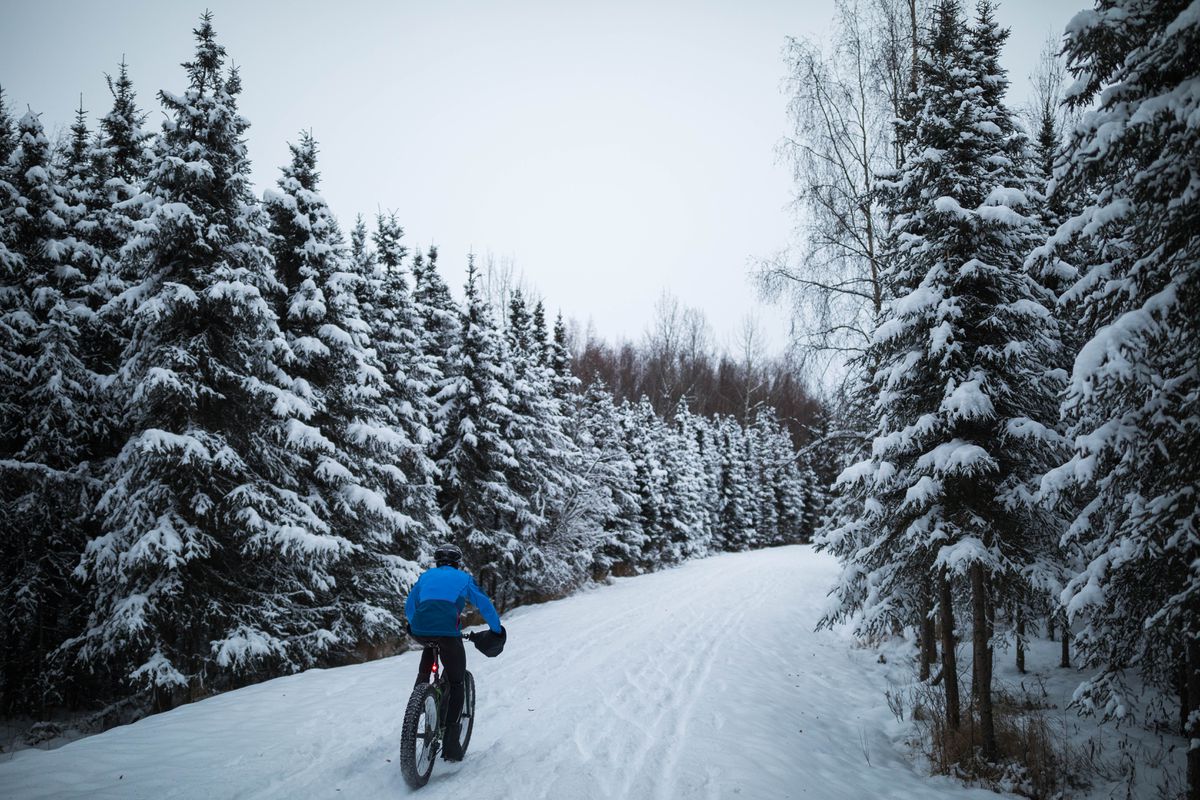 The first time I tried fat-tire biking, it was a pretty big flop.

The scenery couldn't have been better. I was in Talkeetna at a cabin in the snowy woods. A friend brought a fat bike, and people took turns riding. She asked if I wanted to give it a try.

I sat down on the bike, poised at the top of a hill with beautiful snow-covered trees on either side. I was pretty much in a postcard until I attempted to pedal forward and fell over.

Turns out, fat bikes do not miraculously coast across fluffy snow the way they once did in my imagination. I continued to try to move forward, but the single-track path was too narrow, and I continued to oversteer in an attempt to right myself. I left a pattern of snowy zig-zags, framed by holes left by my boots on both sides of the trail and a couple of what could charitably be called snow angels where I'd fallen.

I still loved the idea of fat biking. But it took a couple of years for me to try it again, especially since it seemed like an expensive hobby. Why get into something I'm not so good at that carries such a high entry price?

Fast forward to today, and now fat biking is my hands-down favorite. Even as someone who loves being outside, many of the activities I do aren't exactly pure fun. Running has its high points, but is also work. Fat biking is exercise, fresh air, and also sheer, easy joy.

I tried fat biking again with some friends from out of town. I'd learned my lesson in Talkeetna, so we started on the well-traveled Powerline Pass Trail from Glen Alps instead of the snowy woods.

It was much easier to ride on packed snow. I loved how the bike was light yet sturdy. I told people it was like riding a La-Z-Boy instead of a bike. And the novelty of riding through a picturesque winter scene was fun.

But this wasn't enough to spur me to buy a bike costing at least $1,500 for something of quality. Sure, there were less expensive versions out there sold at places like Costco, but I figured if I was going to invest, I'd treat it more like a car and less like a bicycle. I'd want it to last.

Then the past three winters happened. My husband recently reminded me that 12 months ago it was 50 degrees outside. Fifty in December in Anchorage, no less. I'd spent three winters with studded sneakers, running year-round instead of only in the summer and shoulder seasons, and skiing when I could on the weekends. I missed my normal winter routes.

That's when I realized that with a fat bike, I could at least ride on city trails no matter how much snow happened to be on the ground. Owning a fat bike would also change up my routine. At the time, I was either running or sitting in my basement staring longingly at my cross-country skis.

So, this summer, I found a bike. It's a Salsa Mukluk, made for distance, bike packing, and, yes, snow. I haven't looked back.

I frequently find myself cruising trails around Far North Bicentennial Park thinking both that the trails seem crowded with fat-tire cyclists, and also that everyone should try it. It is magic to go whizzing through the woods on two wheels, surrounded by snow. With a proper headlamp, it's even more magical to go at night and see snow glittering on trees in the dark as I move through.

I've learned how to not fall over on my fat-tire bike. I like to think that if I were back on that very narrow trail in Talkeetna, I might perform better with my newfound discovery of this thing called a "core." I know. I actually disdain everything about using my "core." I've just never really cared all that much about it, and abdominal workouts are my least favorite of anything (yes, anything). Yet, I find when I focus on "engaging my core" on my bike, I am better able to steer without using my handlebars. This prevents me from oversteering and creating the zig-zag pattern I did in Talkeetna. Now I can move forward in a straight line.

I still fall over sometimes. I still oversteer. But, whereas once I was unable to fat bike properly all the time, now I am 50 percent able to cruise through the woods. That's an acceptable improvement.

I'm willing to keep learning because the reward is so much fun. Unlike some outdoor activities — running, skate and classic skiing — the technical ability required by fat-tire biking is pretty easy and immediately fun. If I make it to the top of a steep hill on single track in Kincaid, I will say so out loud. To myself. And the trees. If you are skiing nearby and hear a "YES!" coming from the woods, hello.

If you, like me, are looking for that next winter "thing," consider fat-tire biking. Trek, Chain Reaction and Alaska Pacific University rent out fat-tire bicycles for $40 to $80 a day. Give it a whirl.

For beginners, experts and all fat-bike enthusiasts, a celebration of fat biking in Anchorage will take place Feb. 25 in downtown Anchorage during the Fur Rondy festival in Anchorage. Check out http://www.bigfatride.com/ for info.