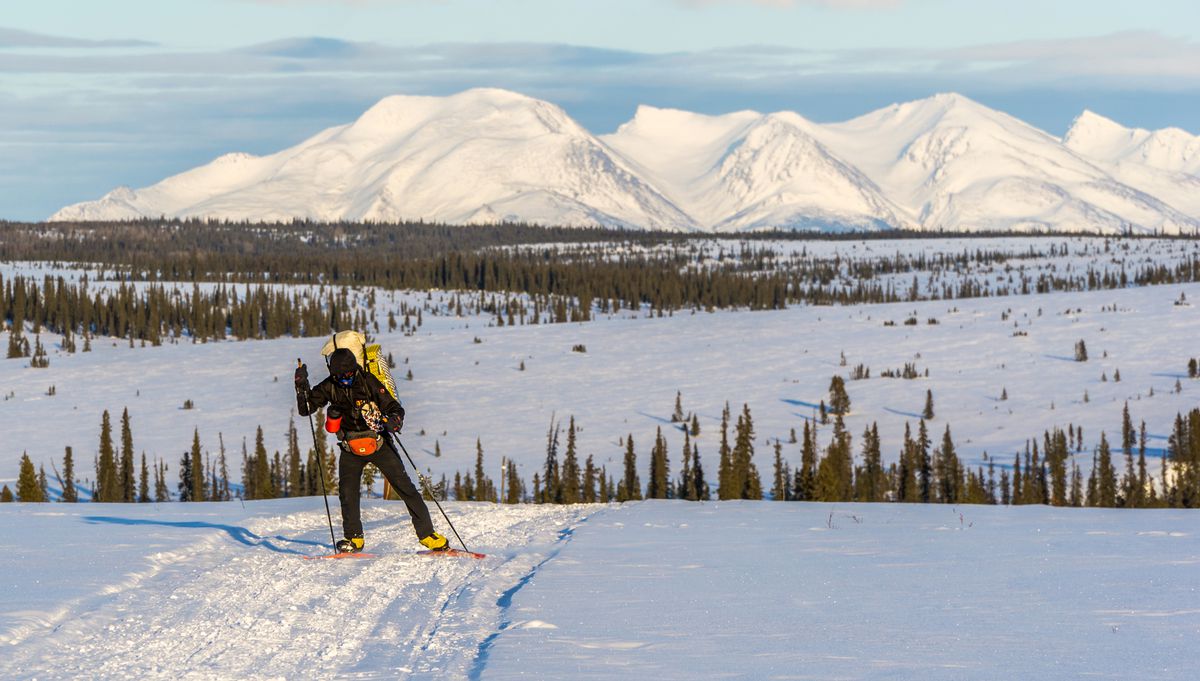 KOBUK — As I stood in the harsh wind in the middle of the frozen Kobuk River, I threw a temper tantrum.

We'd skied all day against a biting headwind. Snowdrifts piling up in the trail had reduced forward progress to a crawl. After two hours of battling drifts and wind, the GPS showed no gain in straight-line distance toward Kiana, our destination for the night.

My vitriolic, profanity-laced tirade amounted to "I'm not particularly enjoying myself right now, and I hope a snowmachine comes by so I can ask for a ride," though that's not exactly what I said.

My partners on this ski trip, Bob Gillis of Fairbanks and Robin Beebee of Anchorage, simply looked at each other the way parents might when waiting out the meltdown of a potty-mouthed toddler. They chose to ignore me.

No snowmachines came by. Locals are too smart to travel in such weather. So I put my head down and trudged on; there was no other choice.

Such are the low moments of great trips. But the six days that Bob, Robin and I spent skiing a little more than 200 miles from Kobuk to Kotzebue last March had more highs than lows.

In Alaska's northwest Arctic there is a spider web of interconnecting trails radiating from Kotzebue to the surrounding villages. And a trip on these trails is, in many ways, unique in North America.

We skied through true wilderness, including Kobuk Valley National Park, but we traveled on a (mostly) hard-packed trail and spent our nights in villages, sleeping indoors every night. In that respect, the experience is more comparable to a hut-to-hut ski trip in the Alps than most Alaska trips — albeit with a decidedly rural twist. No one is likely to offer you muktuk in the Alps.

The trip west from Kobuk travels along the south side of the Brooks Range and mostly stays on the Kobuk River. We took a regular-service Bering Air flight from Kotzebue to Kobuk, and started skiing as soon as we got off the plane.

The village of Kobuk was quiet in the morning hours; we silently schussed through town on new snow and headed out to the river. We pre-arranged places to stay along the way, including two schools, a private house, a lodge and a shelter cabin between Ambler and Kiana that broke the 90-mile trip between those villages into two days.

In Ambler, we stayed with the region's only doctor, Kim Douglas, and her husband Harry in Harry's childhood home. Kim is the mother of a good friend from high school in Fairbanks. Staying in their home and getting a more personal look at Inupiat life was a highlight of the trip, matched only by the skiing the following day.

The trail leaves the river west of Ambler, and passes through hills in Kobuk Valley National Park. As daylight waned on that first day out of Ambler, the sky turned pink and the wind began to increase. The spindrift blowing across the trail was beautiful, but ominous.

We arrived at the shelter cabin shortly after dark amid rising winds. Our night there divided the prettiest day from what would prove to be our hardest day.

The 45-mile ski from the shelter cabin to Kiana was not the longest, but it was the hardest. The storm that started the previous night howled all day while we struggled forward at a snail's pace. The glaring sun did little to warm our frozen extremities, but as day turned to night, the pink light of the evening sun bathed the river and warmed my mood.

My histrionics that afternoon were forgotten as the headwind became a tailwind, and the trail was blown clear. We covered 10 miles in less than an hour, pushed by wind across patches of glare ice with smiles on our faces. We didn't stop to share the moment, however — there was an unspoken agreement to use this time to cover as many miles toward Kiana as possible.

We were wrecks by the time we arrived. It was late at night, but they keep late hours in many villages, and a lot of people were out and about to welcome us to town. We were touched, but too tired to return many smiles.

The two remaining days didn't compare either in beauty or difficulty, but I was excited about one final novelty: crossing Hotham Inlet to the Baldwin Peninsula and Kotzebue.

We followed the Kobuk River through a meandering delta where it finally runs into the sea. I'd seen sea ice from the air a couple of times, but had never been on it.

The five-night trip, in which we stayed in villages nearly every night, was a true adventure. It's a unique opportunity for adventure luxury in rural Alaska, and is a remarkable, and very repeatable, trip to a beautiful place.

However, it's a winter-only trail; in the summer, travel is on the river by boat only. Early April is likely a better time, with milder weather and lots of daylight, but March worked for us.

It's a complicated trip, probably best for those with experience in Alaska. Long distances and harsh weather can deliver serious consequences for the unprepared. We also leaned heavily on all of our contacts in the area, even for things as simple as finding fuel for our camp stove in Kotzebue. We're grateful to the people that helped us along the way.

Nonetheless, we realize we barely dipped a toe into life in the northwest Arctic. As a lifelong Fairbanksan, I'm struck by how little I know about rural Alaska. It's a fascinating and beautiful place, and I encourage other city-dwelling Alaskans to research recreational possibilities there. It's impossible to ask for a more unique trip any closer to home.

Seth Adams is a freelance adventure writer and photographer living in Fairbanks.