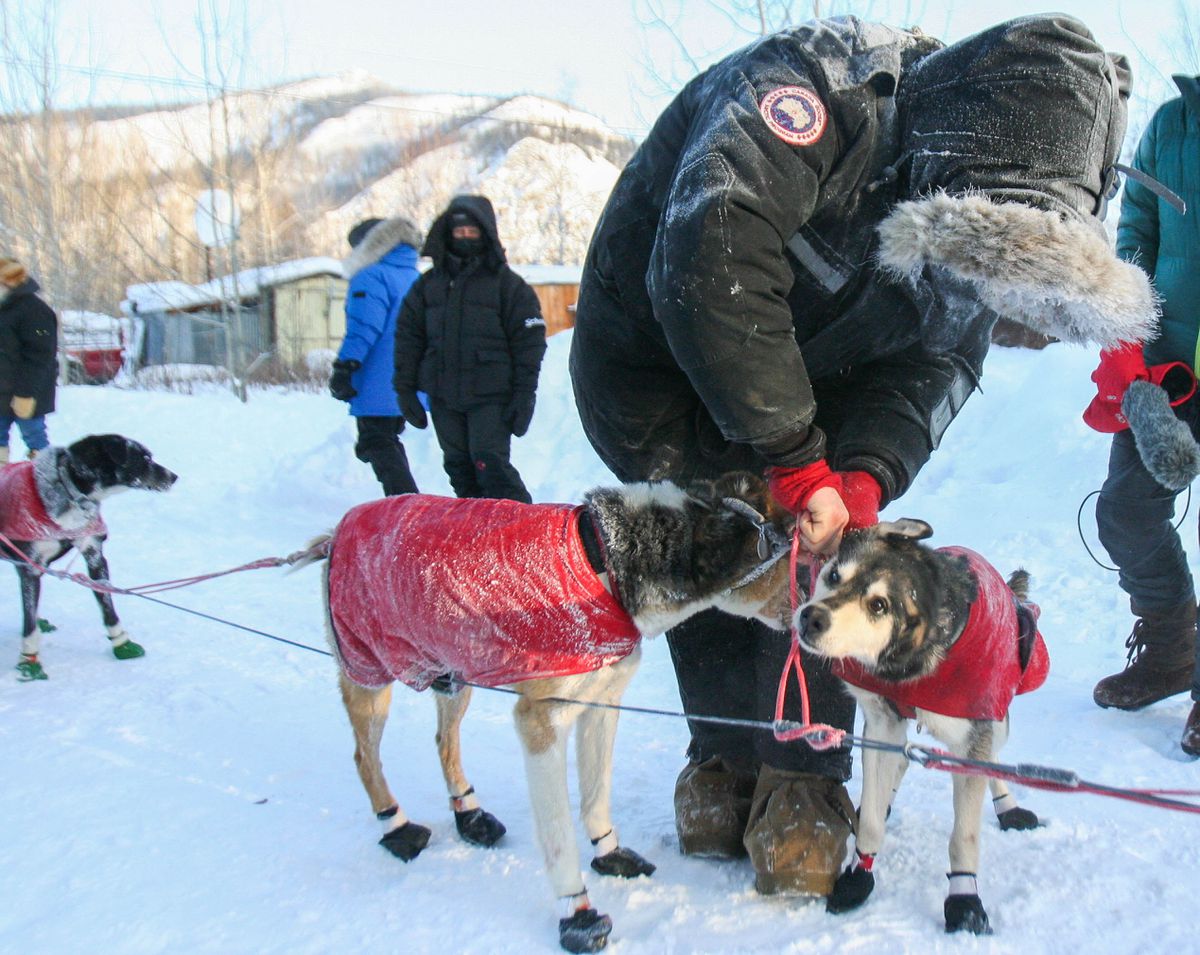 Matt Hall puts a dog that had been riding in his sled basket back onto his gangline in Eagle on Friday. Eagle is the first Yukon Quest checkpoint in Alaska on the 1,000-mile trail between Whitehorse and Fairbanks.  (Sam Friedman / Fairbanks Daily News-Miner)

Matt Hall puts a dog that had been riding in his sled basket back onto his gangline in Eagle on Friday. Eagle is the first Yukon Quest checkpoint in Alaska on the 1,000-mile trail between Whitehorse and Fairbanks.  (Sam Friedman / Fairbanks Daily News-Miner)

After guiding his team through bitter cold to seize the lead in the Yukon Quest, musher Matt Hall of Two Rivers received a warm welcome in Circle on Saturday night.

Quest officials reported on Facebook that it was minus-42 when Hall arrived with his team of 12 dogs at 7:55 p.m. A steak dinner awaited inside.

Brent Sass of Eureka, the leader through the halfway point of the 1,000-mile race from Whitehorse to Fairbanks, arrived 30 minutes later at 8:25 p.m. behind a team of 11 dogs.

Defending champion Hugh Neff was still on the trail in third place.

Hall, 25, passed Sass, 37, on the 160 miles of trail between Eagle and Circle. Hall was in the lead by the time he reached Slaven's Cabin, a dog-drop site about 100 miles into the run.

On Thursday morning, Hall was nearly six hours behind Sass when he left Dawson City, where all mushes take a mandatory 36-hour layover.

He steadily gained ground behind leaders Anchor and Hamlet. The dogs might have gotten a boost running into and out of Eagle, where Hall grew up.

His parents, Wayne and Scarlett, operate a wilderness sled dog guiding business there and were waiting to hug Hall when he stepped off his sled runners at the checkpoint Friday morning.

Hall's childhood home was a cabin six miles downriver from the town of 100. He started driving four-dog teams when he was 5, his father said.

In the past few years, Hall has devoted himself to competitive sled dog racing, spending summers conditioning dogs while giving tourists rides on the Juneau Ice Field. He moved to Two Rivers near Fairbanks to better facilitate his training.

Wayne Hall is a former Yukon Quest musher. He supported his son's decision to move away from Eagle to further his mushing career.

"You really can't train here to race. You can get the dogs in shape but you can't get their heads right, they're not around other dogs. You've got to run the Copper Basin 300, you've got to run other races," he said.

The elder Hall said he used to run his dogs 160 miles to reach a dog truck to drive to races, a long ordeal. Eagle doesn't have road access in the winter because the state doesn't plow the Taylor Highway.

These days, seven sled dog teams are in the Eagle area, enough to make a racket Friday when mushers drove into town.

Hall was the third to arrive, behind Sass and Neff. After about an hour spent feeding and bedding down his team in Eagle, Hall came inside the checkpoint. He talked cheerfully about his race while eating two entrees from the checkpoint's refrigerator of "all you can eat" musher meals: chicken parmesan with noodles and a breakfast burrito.

Left behind in Dawson was Hall's favorite dog, a leader named Keeper —
a white 9-year-old with patches of black and tan. Hall decided to drop him in Dawson because of a sore shoulder and hind leg.

At the start of the Quest, Hall said Keeper will retire after this season. Keeper led Hall to his Rookie of the Year third-place finish in the 2014 Quest and to his victory in last year's Copper Basin 300.

After Circle, mushers face a 75-mile run to Central before a steep climb up 3,685-foot Eagle Summit before dropping down and climbing to Rosebud Summit. After those taxing ascents comes a steep descent before reaching Two Rivers and the Fairbanks finish line.

Sam Friedman of the Fairbanks Daily News-Miner contributed to this report.