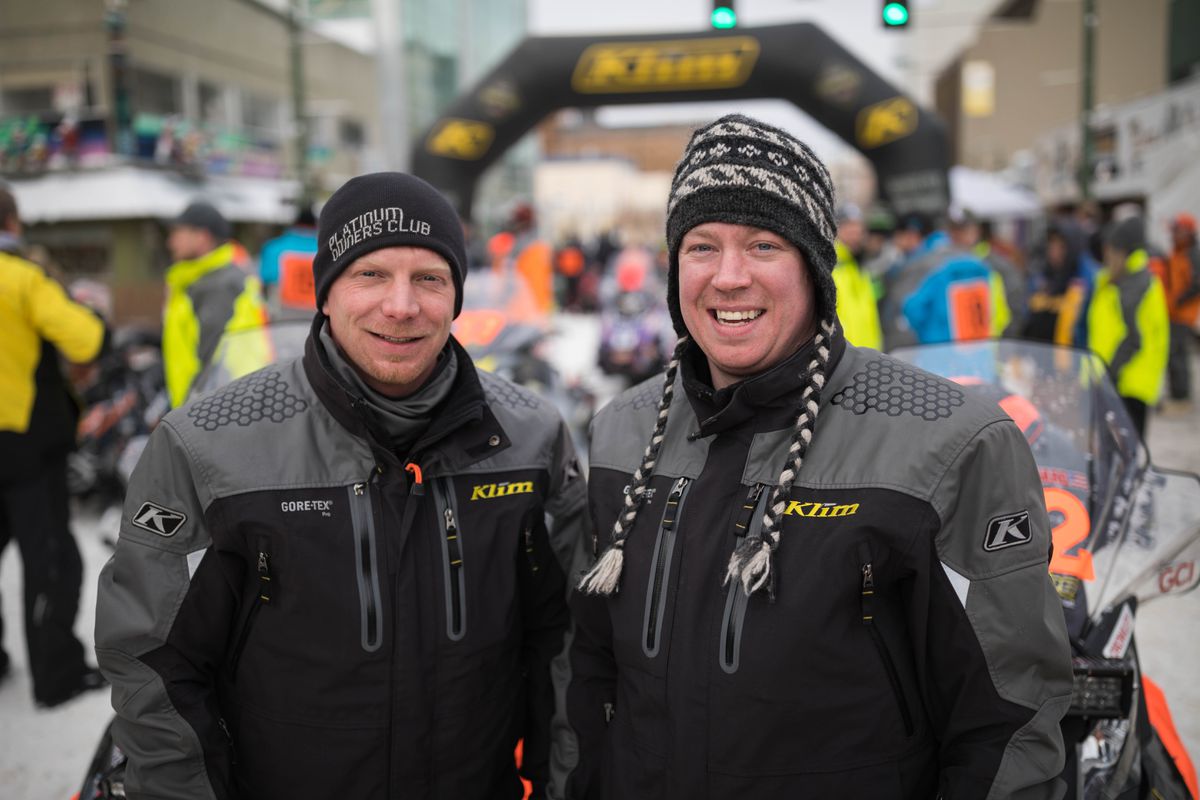 Iron Dog teammates Rurik Lindner, left, and Andy Swenson at the ceremonial start of the 2017 race on Saturday. Both are sons of well-known Iditarod racers, Lindner the son of Sonny Lindner and Swenson the son of 5-time Iditarod champion Rick Swenson. (Loren Holmes / Alaska Dispatch News)

Iron Dog teammates Rurik Lindner, left, and Andy Swenson at the ceremonial start of the 2017 race on Saturday. Both are sons of well-known Iditarod racers, Lindner the son of Sonny Lindner and Swenson the son of 5-time Iditarod champion Rick Swenson. (Loren Holmes / Alaska Dispatch News)

Though countless sons have followed their fathers' footsteps in any number of professions, the Iron Dog snowmachine race is proving the next generation can cut its own path, too. Even if that path follows a familiar trail.

Fairbanks riders Andy Swenson, 33, has again teamed up with Rurik Lindner, 40, to race their Ski-Doos in the world's longest and toughest snowmachine race, from Big Lake to Nome to Fairbanks. They're one of the 35 teams that will zoom off the Big Lake ice on Sunday starting at 11 a.m.

You might recognize those last names. Swenson is the son of Rick Swenson, the winningest musher in Alaska's biggest sporting event, the Iditarod Trail Sled Dog Race. Lindner is the son of Sonny Lindner, a longtime pal of Swenson's, whose own distinguished Iditarod career stretched from 1978 to 2014, when he capped five decades of mushing with a fifth-place finish and the fastest time of his Iditarod career as a 64-year-old.

[Which Johnson-Aklestad team will show up to defend their Iron Dog title?]

Andy Swenson got his name from the fabulous lead dog that pulled Rick to four of his five Iditarod victories. But he never inherited a burning desire to drive a team of animals hundreds of miles across Alaska's untracked wilderness.

"If I was a little younger or didn't have as many responsibilities, I might be able to lay it all on the line and do it," the younger Swenson said. "But I've got a wife and two kids and a mortgage and people counting on me at work. To run the Iditarod, you have to devote two years of your life with it."

Even though the challenge is similar, the Iron Dog is different in significant ways. Both Lindner and Swenson, who work together at Fairbanks general contractor Johnson River Enterprises, which Lindner owns, appreciate being able to work a full-time job, come home and hop on their Ski-Doos for a 200-mile training run after dinner. Then they park the machines and don't have to think about them for a day or two.

"It simply does not take the commitment that the animals require," Lindner said. "You don't feel so bad if you don't go out and run them.

"Construction is a full-time job, and taking two weeks off is different than the months of preparation for the Iditarod. A lot of these guys out here (for the Iron Dog) are just working guys."

Swenson said his famous father never pushed him toward sled dog racing. Rather, the champion musher was an accomplice in nudging his 9-year-old toward snowmachining.

From that point on, there was no looking back.

"You gotta be happy with what your kids choose to do," Andy said, "and I think he's definitely happy I'm putting as much effort into what I want to do. I'm out there on the weekends. He knows what it takes to do something like this. He's proud of me to make it as far as I have."

Last year, the duo nearly made it to the Iron Dog's halfway point of Nome before running into mechanical troubles. Swenson thinks they got some bad gas along the trail that left him running on one cylinder into White Mountain. After taking an eight-hour break, they crawled into Safety, just 22 miles from Nome, "where my rig blew up," Swenson said.

Making matters worse, the drivers were pinned down in a ground blizzard blowing through the renowned blowhole near Safety, the same area where Jeff King was thwarted in 2014 during his bid for a fifth Iditarod victory. Lindner and Swenson spent three hours sitting out the storm before race volunteers were able to tow them into Nome.

They eventually scratched, but in the rugged Iron Dog, that's hardly unusual. Last year, 18 of the 41 teams — 44 percent — failed to reach the Fairbanks finish line.

In 2015, the year after he retired from Iditarod mushing, Sonny Lindner teamed up with Rurik for the Iron Dog.  Sonny had scratched only three times in 22 Iditarods, but his Iron Dog race ended in Ruby.