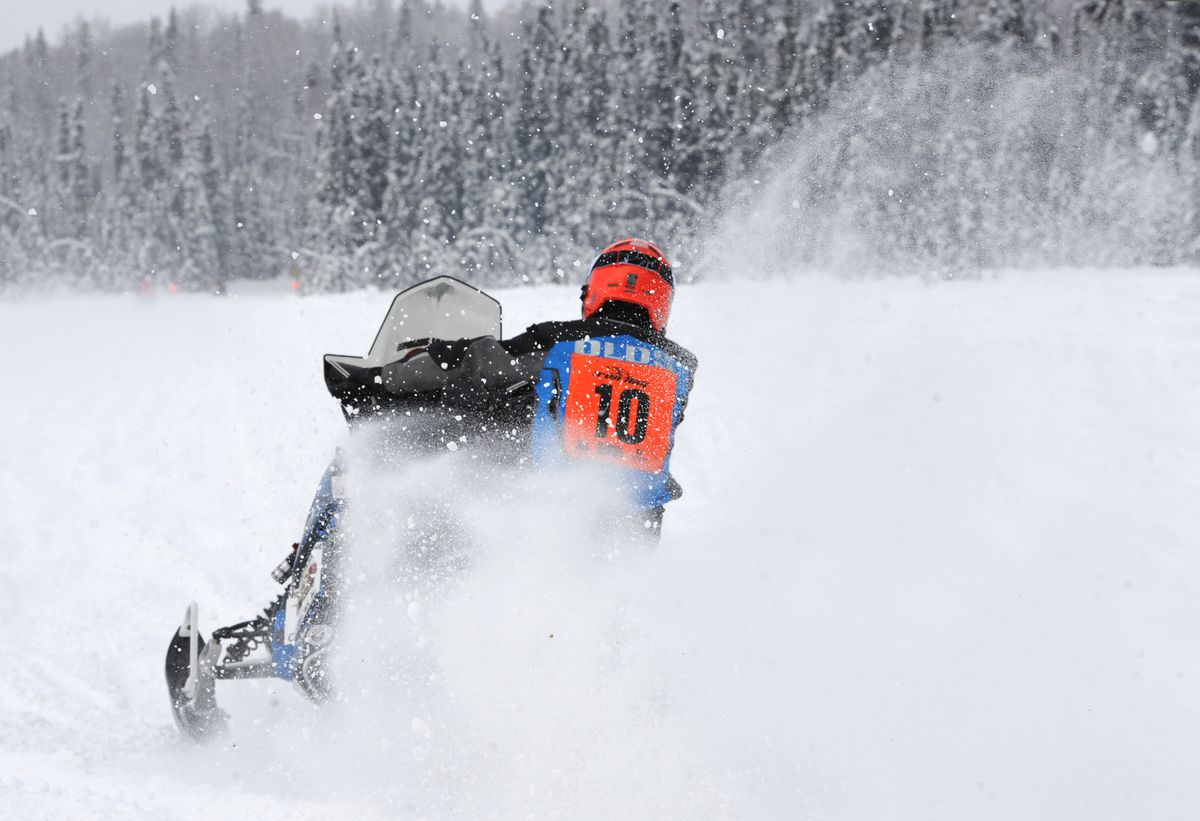 Iron Dog snowmachines throw up snow that can make it tough to see, especially when it gets windy. (Bill Roth / Alaska Dispatch News)

Iron Dog snowmachines throw up snow that can make it tough to see, especially when it gets windy. (Bill Roth / Alaska Dispatch News)

The leaders of the Iron Dog snowmachine race pulled into Nome on Tuesday for a day of rest, recuperation and repair before heading east toward the Fairbanks finish line Thursday morning.

From the Big Lake start of the world's longest and toughest snowmachine race, one of these two teams has led the way.

Minnick, 37, in his 15th Iron Dog, is happy to be indoors. After a Big Lake start he called "extremely warm," temperatures have plunged.

By the time he and Olstad reached Rohn after crossing the Alaska Range, it was below zero. When they left the Interior town of McGrath on Monday, it was minus 42 and the gas pumps on their Polaris machines were freezing up. By Ophir, it was minus 52. By Unalakleet on the Norton Sound coast, the temperatures had climbed, but the wind was blowing hard.

"It's been a while since it's been this cold," said Minnick, who was an Iron Dog rookie in 2002. "It's so cold, it's hard to keep your focus. Your goggles are fogged up, and the snow dust is so bad it can be tough to see."

Winds on the 170-mile Seward Peninsula stretch from Koyuk to Nome were particularly strong, up to nearly 30 mph. "It was nice to get out of that," he said.

Minnick estimated the gas pump problems cost the team nearly 20 minutes — and the lead — in McGrath, though Minnick didn't mind letting someone else break trail for a while.

In his long Iron Dog career, Minnick has had a 45-minute lead in Nome and lost. He's also come from that far behind to win one of his two championships.

So even though he believes the winner will be one of the top three teams, Minnick isn't counting his prize money yet.

"Anything can happen. There's a lot of tough racing left," he said, although the second half of the race involves more flat river-running than the trip to Nome. "You just gotta be clean, you can't make mistakes and you can't waste time."

Cory Davis, the 28-year-old six-time X-Games medalist from Soldotna, and his Canadian partner, Ryan Simons, were a somewhat surprising third, 22 minutes out of second place.

In their combined seven starts, Davis and Simons have only finished three times, including Davis' career-best fourth-place finish in 2011. He is the son of the retired Scott Davis, the driver whose seven wins tie him with John Faeo for the most in race history.

Nome is where teams can do repair working before resuming racing — but all the wrenching is done on the clock, which makes efficiency critical.