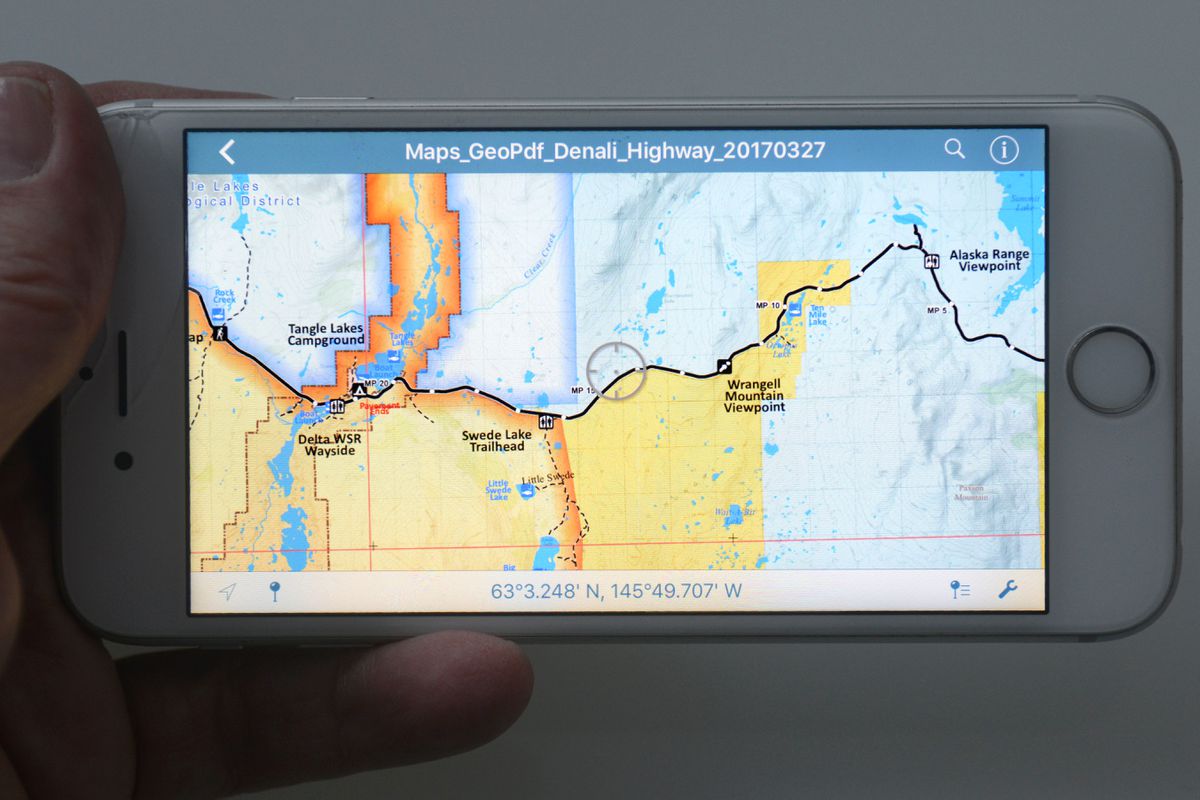 The Bureau of Land Management Alaska has started unveiling free digital maps that users can download to their smartphones and open in a third-party mobile app. The app can use GPS technology to show the user's location on the map, even if that person is without cellphone service, said Lisa Gleason, a BLM Alaska spokeswoman.

Gleason said the federal agency released its first series of digital maps on March 27, posting them online at blm.gov/maps. The 10 maps cover about 102 million acres of BLM-managed lands and surrounding areas and have the most current geospatial data embedded, she said. The maps include the Denali Highway, the Dalton Highway and the National Petroleum Reserve-Alaska that borders the Arctic Ocean.

By June 3, the agency plans to publish a digital map for the 730-acre Campbell Tract area in Anchorage, Gleason said. The Iditarod National Historic Trail is also a priority, she said.

BLM Alaska started working on the suite of digital maps about two years ago in response to public interest in mobile access to maps of public lands, Gleason said. She said BLM can update the digital maps more quickly than the paper versions.

"Getting updates to paper maps takes a long time and it costs a lot of money," she said. "A digital map can be more easily updated and more easily carried."

She described the new technology as a "lighten-the-load solution" for hikers who will have to carry one less thing if they opt for the digital maps. However, she said, the maps are just "one tool" for navigating the backcountry.

"It's not the be-all end-all of information," she said. "There's still a lot of information you would need if you're planning to go off the grid."

BLM Alaska is not the only federal agency going digital with its maps.

The U.S. Forest Service published an interactive visitor map earlier this year for lands it manages, said Dru Fenster, a spokeswoman for the Alaska Region of the Forest Service.

Users can download the Forest Service map and import it into a third-party app, just like the BLM maps. Fenster said public interest also drove the U.S. Forest Service to produce the digital map, which can be found at fs.usda.gov/r10.

"We already have print maps that we sell to people and so we know that there's a need and desire for that kind of information, but people also want things that they can take out in the field that aren't paper," Fenster said. "Younger folks expect to have access digitally."

Meanwhile, the U.S. Geological Survey has partnered with several agencies since 2013 on the Alaska Mapping Initiative, producing digital topographic maps of the state with multiple layers of information, said Mark Newell, a USGS spokesman.

"We fuse data together from other agencies in order to give the most accurate and the most current map that we can possibly get," he said.

USGS has produced 3,731 digital topographic maps for Alaska, about a third of the way into its goal of mapping the whole state, Newell said. People can download the maps for free from nationalmap.gov.

Third-party mobile apps that work with the digital maps include "Avenza Maps" and "NextMap," said Gleason, with BLM Alaska. She said any mobile app that reads geo-referenced PDF maps should also work.

Users can download the maps online and import them into the app while they have access to cellphone service, and then use the maps when offline — viewing their locations as they travel down trails.

Dean Knapp, a volunteer with the Alaska Mountain Rescue Group, said the digital maps provide much-needed updated information. He recalled a time when a team used a paper map that featured a road that was no longer there by the time it traversed the area, creating confusion.

Knapp did caution people that the offline GPS on a cellphone may not always work or may provide an inaccurate location when used in a mountainous region.

"The technology is great when it works, but it does have some limitations," Knapp said.

Lesli Ellis-Wouters, chief of communications for BLM Alaska, said that the GPS on the digital map had worked during her flight over the National Petroleum Reserve. But she said the agency still recommends that people use the maps as just one tool.

"I would never use this as your sole source of reference," Ellis-Wouters said. "We highly recommend that you have safety backups, as always."

BLM Alaska staff and volunteers debuted the BLM map series at The Great Alaska Sportsman Show at the Sullivan Arena in Anchorage that runs through Sunday. They will also display the maps at the Fairbanks Outdoor Show from April 21 to April 23.