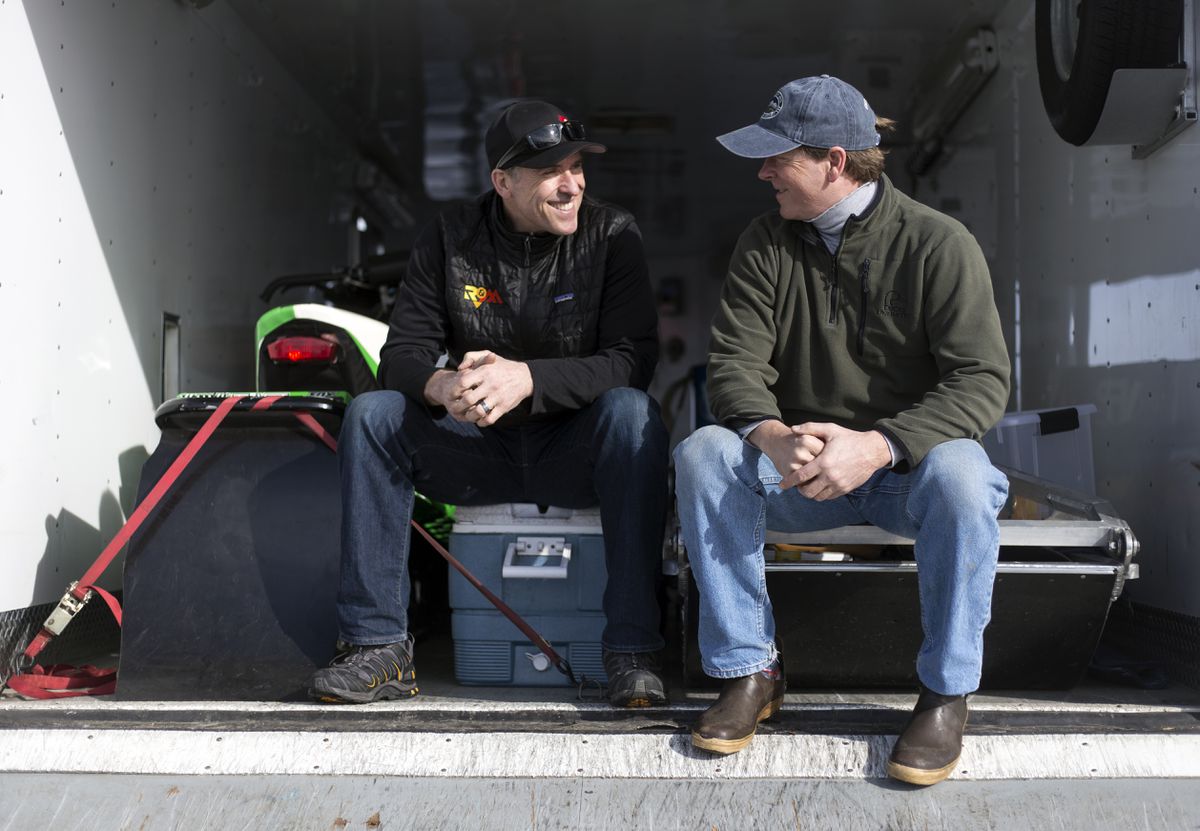 Will Alaska's year of graybeard champions add two more aging athletes to its 2017 roster of winners when the 32nd annual Arctic Man ski and snowmachine race blitzes through the Hoodoo Mountains this week?

Already, 66-year-old Roxy Wright has dispatched the young bucks of sprint mushing in capturing the Fur Rendezvous World Championship Sled Dog Race in Anchorage and the Open North American in Fairbanks. And in between those victories, 57-year-old Mitch Seavey seized a third Iditarod title while extending his own record as the race's oldest champion.

Now along comes 52-year-old skier Eric Heil and 56-year-old snowmachiner Len Story, who Thursday will take on a bevy of hotshot youngsters in a bid to become the winningest team in this race, the premier event in a weeklong festival that some consider a Motorhead Woodstock, attracting as many as 12,000 people.

So there will be plenty of witnesses if Heil, a physical and health education specialist at Goldenview Middle School, and Story, the CEO of R&M Consultants, celebrate their 20th Arctic Man with a record sixth victory. Their first came in 1993; their last came in 2009.

A win would break a tie between Heil and Story and the team of Tyler Aklestad of Palmer, an Iron Dog snowmachine champion, Marco Sullivan of Squaw Valley, California, a four-time Olympic skier.

"We want to be the first to six," Heil said. "I'm competing against these world-class Olympians. I tend to hang in there on top, and compete pretty strongly on the midsection."

The race is scheduled for 11 a.m. Friday in the Hoodoos, about 82 miles north on Richardson Highway from its intersection with the Glenn Highway, when driving from Anchorage.

Howard Theis, who created the race in 1986 and still runs it, said the purse will total more than $80,000 spread across four races — men's and women's ski and men's and women's snowboard divisions. Entries were still trickling in Wednesday, and 24 people had signed up, far fewer than the 69 racers last year.

On the course, the skier starts atop a 5,800-foot peak known as the Tit, before plunging 1,700 feet in less than two miles to an open area lined with spectators where a high-speed dance with the snowmachiner starts. The skier or boarder grabs a tow rope on the fly and is towed uphill by the snowmachine for about 2.2 miles. Once atop another hill, the skier gets slung downhill for a 1,200-foot dive to the finish.

That produces some serious torque, and Heil is far from 100 percent — in fact, he's not certain he'll be able to race.

His humerus, the long bone in the upper arm between the elbow and shoulder, was fractured a few weeks ago in a fall on the North Face at Alyeska Ski Resort.

"I crossed the tips of my 215s on the North Face in hard March conditions," he said. "I thought I had broken ribs.

"… I'm in pain 24 hours a day right now, so we'll see what I'm capable of doing when I get up there. If I take another hard fall, that won't be good."

That's not all. In January, Heil had surgery on a torn meniscus in his knee. The meniscus is a piece of cartilage that cushions and stablilzes the joint. Ligaments holding his patella (kneecap) in place don't stretch and relax like they used to.

It's called aging, and every athlete experiences it — though some Alaskans have done a remarkable job of masking it this year.

"Time must be catching up," Heil allowed, "but beyond the injuries, there's a wisdom piece that has a value. I just don't have the equipment or the time on my skis that a lot these younger guys do. I'm basically skiing 14 days a year for a couple of hours each time.

"But we take a lot of pride in what we do. Len is a highly talented, calculating driver. He picks a pretty good line. And together, we've made a great career of it."

"I've heard that they had a really cold March," Heil said, "leaving it very hard packed and bumpy. But recently, they had a little bit of new snow. But some grooming can make it superbly fast."

How fast? Heil and Story own the Arctic Man speed record of 91.6 mph, set in 2005 and recorded with a speed gun on one spot on the course. That helped the duo capture their fourth title.

Sullivan and Aklestad set the record of 3 minutes, 52.72 seconds on the 5½-mile course in 2013, averaging 79 mph on a route that includes uphills.

No surprise that the race's motto is "Go fast or go home."