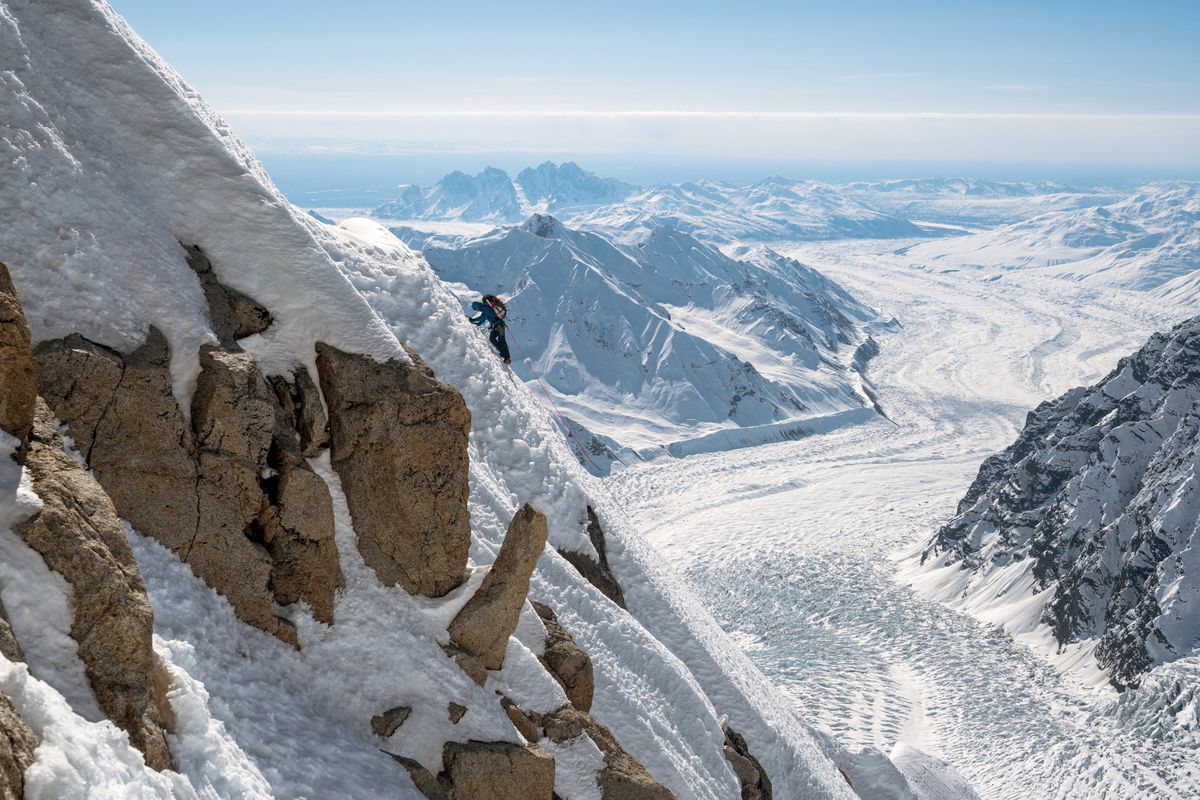 Jess Roskelley traverses toward the Third Tower on day three of the climb of Mount Huntington via the South Ridge in late April. Often Roskelley and partner Clint Helander would finish a pitch lower than they had started due to the traversing nature of the ridge. The Tokosha Mountains rise in the distance. (Photo by Clint Helander)

Jess Roskelley traverses toward the Third Tower on day three of the climb of Mount Huntington via the South Ridge in late April. Often Roskelley and partner Clint Helander would finish a pitch lower than they had started due to the traversing nature of the ridge. The Tokosha Mountains rise in the distance. (Photo by Clint Helander)

Once on top, battered by a fierce windstorm, they were forced to hole up a full 36 hours before descending.

Huntington is a striking rock pyramid 8 miles southeast of Denali, and though overshadowed by the tallest peak in North America, climbers consider Huntington far more challenging, with steep drops in every direction. It wasn't climbed until 1964, and the second ascent a year later was recounted in David Roberts' mountaineering classic, "The Mountain of My Fear."

"Complex ridge climbing is somewhat out-of-vogue these days, since it is often hard, scary and slow, no matter how good of a climber you are," said Alaska climbing writer Seth Adams. "Modern climbing tactics involve climbing very fast, but in this case (Helander and Roskelley) had to combine modern speed climbing tactics with more of an old-school approach, including a willingness to be on the route for several days.

"This route is likely the longest technical first ascent done in Alaska in recent history."

Climbing the 9,000-foot-long Gauntlet Ridge was like negotiating a saw blade made of granite, "but Jess and I climbed with an inexorable fervor that neither of us is likely to experience again," Helander wrote in a Facebook post detailing the climb.

In 1980, Jeff Thomas wrote about the ridge in American Alpine Journal, arguing that it's "not so much a ridge as five separate serrated peaks, each increasingly higher. To climb the entire ridge was enticing, but it would be terribly difficult."

Not until the fourth day, as the duo negotiated the cornices of Idiot Peak, were "we certain for the first time that we were not only going to summit Mount Huntington, but we were going to survive," Helander wrote.

But as success loomed, the ideal weather the climbers had enjoyed throughout the expedition turned nasty "as we weaved our way up previously untraveled terrain to the ice-crowned summit of Mount Huntington.

"The whole event had taxed Jess and me to an extent that only became apparent as we stumbled across the lonesome summit in an enveloping gale. Our eyes were welded shut by the snowy wind and our extremities went numb.

"With no visibility or energy to descend the mountain, we spent the next 36 hours huddled in our tiny tent and wet sleeping bags on the top of Mount Huntington. When we hit the summit, the entirety of the last five days of physical movement hit us all at once," Helander said in a phone interview after the climb. "We were kind of fried emotionally."

Not that it was entirely awful. Roskelley, 34, of Spokane, had plenty of juice in his Verizon cellphone, enabling the pair to call home and watch a movie while sitting in their high-altitude tent.

Helander, 31, is a veteran climber who has pioneered numerous routes in the Revelations, remote peaks in the westernmost segment of the Alaska Range. Among them is a first ascent of 9,170-foot Mount Mausolus. Roskelley is son of John Roskelley, a renowned American mountaineer who's climbed numerous 7,000-plus-meter peaks in Nepal, Pakistan and India.

"It's definitely the biggest thing I've done," Helander said of Gauntlet Ridge. "A different beast all together."

And favorable April weather on the way up was "instrumental" to the duo's success, Westman said. "Extraordinarily good snow conditions helped make that possible. A lot of routes in Alaska are very dependent on conditions."