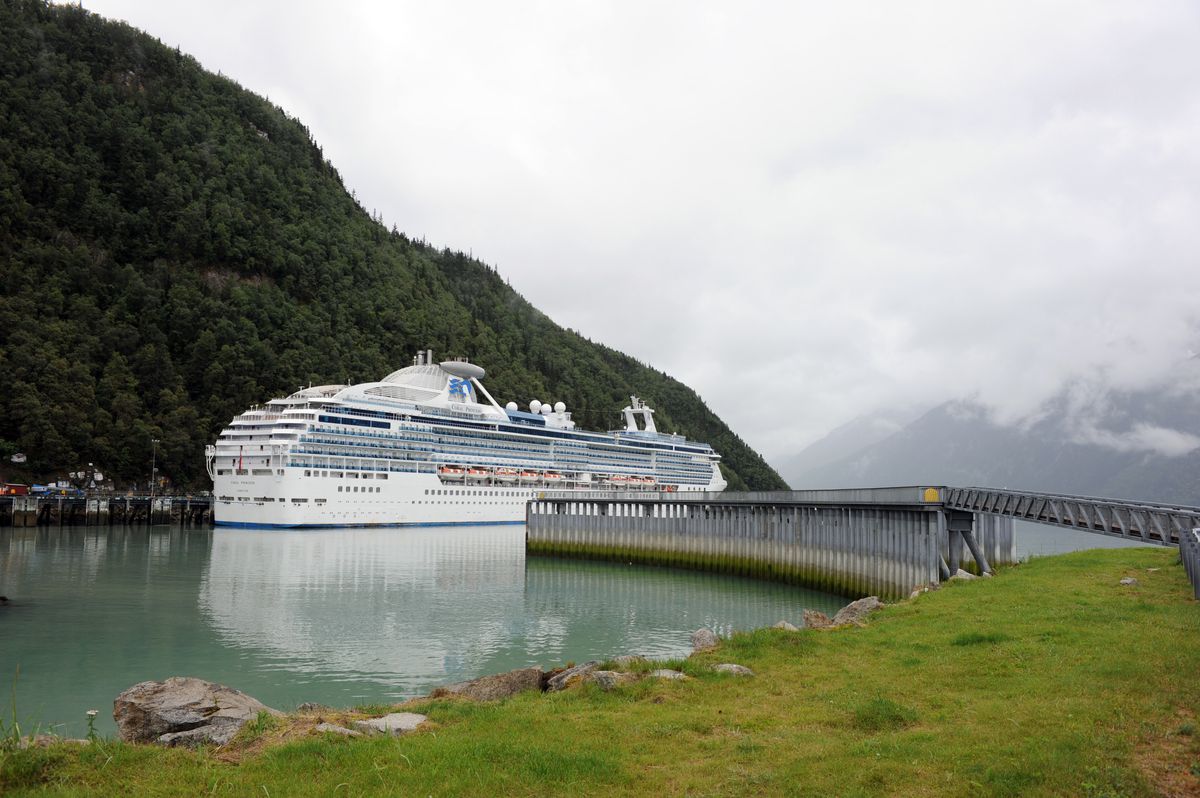 Skagway is a small, cozy Southeast Alaska town of about 900 residents.

But last week, when the first cruise ship of summer tied up at the Port of Skagway, the streets became more crowded. And this week, four big cruise ships — the Coral Princess, Ruby Princess, Norwegian Jewel and Nieuw Amsterdam — will deposit some 10,000 visitors in town.

Welcome to the summer tourist season, the season that makes Klondike Gold Rush National Park of Skagway far and away the most-visited national park unit in Alaska, with 912,350 visitors last year. That's nearly double the 587,400 who visited runner-up Denali or the 520,170 who stopped by Glacier Bay.

The numbers are part of a new National Park Service report that says Alaska's 23 park units saw 2.78 million visitors who spent $1.3 billion in the state last year. That's a 4 percent visitor increase for Alaska parks during the Park Service's centennial.

"I kind of brag about that from time to time," Klondike Gold Rush National Park Superintendent Mike Tranel said of all the visitors to Skagway. "It's a great place, and we take really good care of the historic buildings here. It's mainly tour visitors — we're not a destination park the way Denali is. But Skagway is such an integral part of Alaska history, it's good to share the story."

The number of Skagway visitors is down a bit from the 1.1 million who showed up two years earlier, the first time an Alaska park topped the 1 million mark.

A collection of large and small sites scattered around Skagway at the head of Lynn Canal, Klondike Gold Rush offers a glimpse back to the wild 1890s.

Avid hikers may tackle the famous Chilkoot Trail, a 33-mile trek that follows the route of Gold Rush miners from nearby Dyea to Bennett, British Columbia. Known as "the meanest 33 miles in history," the Chilkoot is a rite of passage for some Alaska hikers, with at least three days of camping usually needed, culminating in a border crossing at the summit of the Chilkoot Pass.

Few of the nearly 900,000 Klondike Gold Rush National Park visitors have the time or the toughness to tackle the Chilkoot Trail. Last year saw 2,734 overnight hikers on the trail, Tranel said. Another 8,469 made day trips on it, and several Skagway tour providers offer hike-and-float trips — customers trek up the trail a couple of miles, then jump in a raft for what one operator calls "a relaxing river float on the tranquil Taiya River" back to Dyea.

While nearly a million people show up in Skagway and get to sample Klondike Gold Rush National Park — the overwhelming majority during a cruise ship stopover — several Alaska national park units can go awhile without seeing visitors.

– Aniakchak National Monument and Preserve received just 100 visitors in 2016 — up from as few as 10 at the turn of the century. Hardy trekkers paddle out of the Aniakchak Caldera on the Aniakchak River, which includes Class III rapids.

– Bering Land Bridge National Preserve in Northwest Alaska saw 2,642 visitors in 2016. Some archaeologists believe ancient populations migrated from Russia into the Americas across this stretch of land during the ice age 10,000 to 12,000 years ago. Once home to mastodons and mammoths, the preserve is now a nesting site for birds traveling the Asiatic-North American Flyway.

– Yukon-Charley Rivers National Preserve got 1,146 visitors. Visitors can paddle through the vast mountains and bluffs and see caribou, peregrine falcons and other wildlife. The remains of gold prospectors' cabins and other historic buildings are part of the park's landscape.

"Aniakchak National Monument & Preserve on the Alaska Peninsula is almost always the long-term winner for least-visited," said John Quinley, spokesman with the National Park Service's Anchorage office. "It's the most remote, expensive, has frequently difficult weather. The rafting trip out of the caldera takes experience and skill."

[Seldom-visited Aniakchak a gem for paddlers when weather clears]

Kenai Fjords, the national park most accessible from Anchorage, Alaska's biggest city, jumped 17 percent in one year to 346,534 visitors, its all-time high. When the National Park Service began estimating Alaska visitors in 1982, Kenai Fjords saw only about 16,000 visitors.

"Certainly, President Obama's visit in 2015 probably brought some additional interest in Exit Glacier, and the retreat of Exit Glacier of continuing interest," he said.

Veach noted that one of Seward's major tour boat operators, Major Marine, will add a boat to its fleet next May, presumably expecting more visitors. The Kenai Fjords 360 is a catamaran with a wraparound third deck rather than a wheelhouse, offering views in all directions.

It should be noted that the park service numbers are rough estimates, not a precise head count — which in some remote parks have yielded a visitor number of zero some years.

"With a few exceptions, we have no entrance gates/doors/fees in the Alaska parks," Quinley wrote. "Commercial vendors (air taxis, etc.) provide us numbers, but people using private planes, boats, snowmachines, their feet … do not need to tell us they are in the park. We count where and when we can — visitor centers, backcountry permits in some places, fly-overs by park rangers who observe people camping.  But are we correct to the last individual number? No way."