Alaska kids give triathlons a try 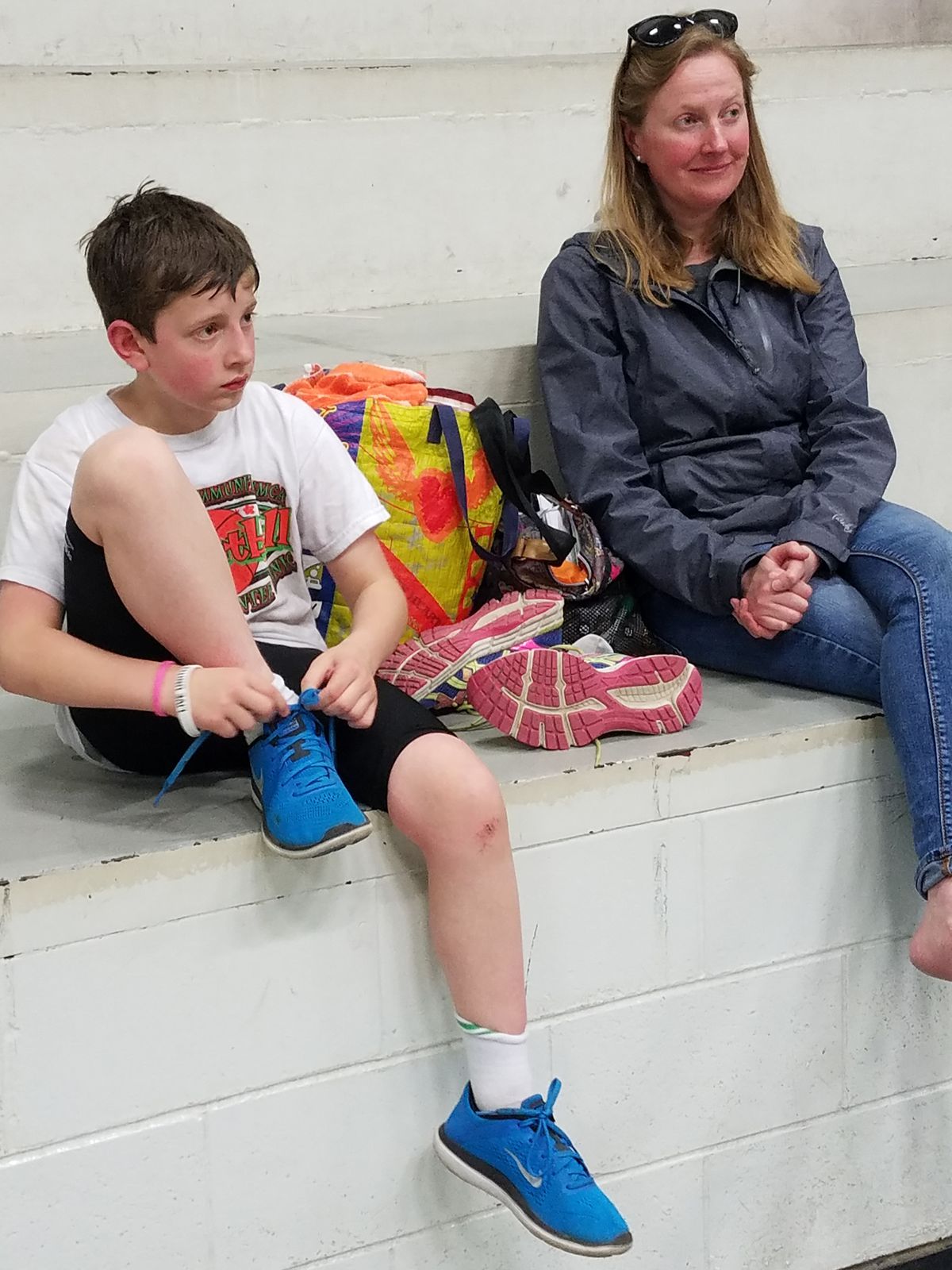 Henry Ash, 9, and his mom Kate Abbott listen to Turnagain Training coach Heather Helzer talk about triathlon strategies after a clinic Saturday at Service High School. Abbott says triathlons have been a fun way for her and Henry to work out together since Abbott is registered for the Gold Nugget Triathlon and Henry is entered in the Trailside and Eagle River triathlons. (Erin Kirkland)

Henry Ash, 9, and his mom Kate Abbott listen to Turnagain Training coach Heather Helzer talk about triathlon strategies after a clinic Saturday at Service High School. Abbott says triathlons have been a fun way for her and Henry to work out together since Abbott is registered for the Gold Nugget Triathlon and Henry is entered in the Trailside and Eagle River triathlons. (Erin Kirkland)

Nine-year-old Henry Ash is already a veteran of triathlons, but he's pretty pragmatic about his experiences. This third-grade finisher of both the Trailside and the Eagle River Kids triathlons knows which of the three stages he prefers.

"Running, definitely," Henry told me as we perched on the concrete bleachers waiting for a kids' triathlon clinic to begin at Service High School. "The swim was my toughest part, and I know that will be hardest this year, too."

Triathlons — races that combine swimming, biking, and running within a set route — are popular in the Lower 48 among both adults and kids. Here in Alaska, where running and skiing races usually reap huge participant numbers among children and families, triathlons are still finding their footing in efforts to entice young athletes. But local organizers are encouraged by a push from past participants and local advocates who say the sport offers kids far more than a chance to simply compete against their peers.

Jamie Locke is the spokesperson and co-organizer of the Trailside Triathlon, celebrating its eighth year in 2017 at Trailside Elementary School on the lower Hillside. Locke says the event, brainchild of fellow teacher and triathlete Carleen Ulbrich, has grown from just Trailside students to an all-Anchorage event, with 400 kids expected at Saturday's (May 13) race.

"We're pretty fortunate that half of our participants come back and do the triathlon the following year," she said. "We try to improve the triathlon any we can from year to year because feedback from parents and kids tells us they really enjoy it and look forward to returning."

This says a lot, given that kids are involved in so many things, both in school and out, these days.

Is an event like a triathlon, where multiple sports converge into one event, tougher to train for? I was curious, knowing many single-sport athletes among my son's schoolmates.

Team USA Triathlon, the body overseeing sanctioned events, training, and demographics has reported slow but steady increases in youth (ages 7-17) participation, calling it "still in a very organic, grassroots state." That said, many cities around the nation are finding more opportunities to encourage kids to give triathlons a try by attaching a children's component to adult triathlons, sometimes calling the result a "festival." Through careful tutelage from USAT-certified coaches, some kids are even rising to the challenge beyond the "fun-run" environment of most youth events, going on to compete at an elite level and some taking the skills to college triathlon teams.

With spring in full gear, Alaska kids have several opportunities to swim, pedal, and run around local venues, but knowing how to start training for an event like this can befuddle many parents, despite the fact that kids have a natural tendency to bounce between one sport and another with little difficulty. It just takes the right sort of encouragement, and maybe some outside help.

Heather Helzer, an educator, mother of an infant son and former youth triathlete is one such mentor. Owner of a new local business called Turnagain Training, Helzer is aiming to raise a new generation of kids excited about this multi-sport opportunity and give them a shot at completing an event.

"Growing up in upstate New York, triathlons for kids were hugely popular," she said. "I grew up with this sport and became a much more confident kid, not just a competent athlete."

For sure, there is much to consider when training for and competing in triathlons, said Helzer, a certified coach with USA Triathlon. That's why few adults attempt them. But she has a plan, and is rolling out a carefully executed series of short, fun group training activities geared toward kids ages 7-15.

On a recent Saturday afternoon, a group of kids gathered at Service High School for an hour of training from Helzer, who has a knack for quick and comprehensive information coupled with in-water and on-trail training, kid-style.

Helzer started at the beginning.

"Who knows what 'tri' means?" she asked, pointing at her young students, all between the ages of 8 and 10. Of course, they knew. Three.

"Really, all kids need at this level is a swimsuit, pair of goggles, shorts, a light jacket and shirt, a bike and helmet, and good running shoes," she told us, emphasizing that safety and comfort always take priority over looking cool.

Then it was onto the best part, and the most exciting aspect of triathlons for kids; the hustle of moving between sports.

Helzer lined up her charges along the lanes of Service High's pool, making sure everyone had goggles and caps on heads.

With a "ready, set, go" little bodies began an enthusiastic freestyle stroke to the far end of the pool and back to the start. Eyes wide, they climbed out, attempted their pushups then scampered, breathing hard, to the front of the pool where wet feet were crammed into running shoes.

Then, with a quick, "Go, go!" from Helzer, they were off for a 1-kilometer route around the backside of the high school.

Helzer ran along then stationed herself at the finish.

"Awesome, you did it!" she said, holding her hand up for a passing high-five from each participant.

"You're ready for a triathlon!"

As for Henry, who came tearing into the finish line with shoelaces flapping and wet hair falling over his eyes, he was confident that he'd make some good time in the Trailside Triathlon.

"It was easier than I thought," he said, hardly puffing at all.

Helzer is hosting one more free clinic for kids who want to prepare for the upcoming Trailside Triathlon. Visit the Turnagain Training website for registration and details:

*Why Not Tri? on June 10, Wasilla. Kids can choose a long or short course. Children must be 6 on race day.

*North Pole Kids Triathlon on June 24, Chena Lakes Recreation Area following adult race at noon. Children must be 17 and under. Limited to 50 kids. Note: This involves an outdoor swim.

Erin Kirkland is author of the Alaska On the Go guidebook series, and publisher of AKontheGO.com, a website dedicated to family travel and outdoor recreation in Alaska.