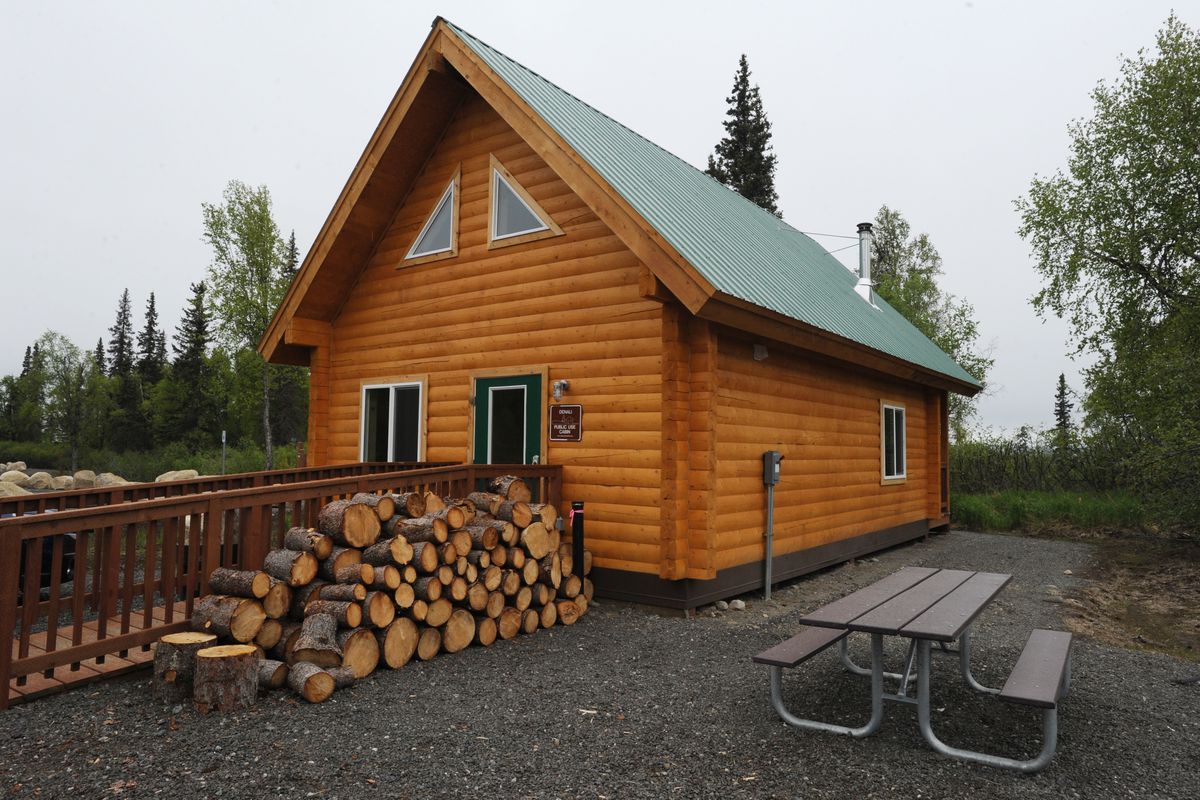 Denali public use cabin at the new K’esugi Ken Campground in Denali State Park located at mile 135.4 of the Parks Highway on Sunday, May 28, 2017. (Bill Roth / Alaska Dispatch News)​

Denali public use cabin at the new K’esugi Ken Campground in Denali State Park located at mile 135.4 of the Parks Highway on Sunday, May 28, 2017. (Bill Roth / Alaska Dispatch News)​

A new state campground with jaw-dropping views, particularly on bluebird days, of Denali and the rest of the Alaska Range will be unveiled for campers, RVers and hikers this weekend. It may not take long for the K'esugi Ken Campground to become one of the most popular in the 49th state.

Friday's grand opening of the complex at Mile 135.4 of the Parks Highway includes an 11:30 a.m. ribbon cutting to be attended by representatives of Alaska State Parks, the National Park Service and the Mat-Su Borough, all of whom partnered in developing the campground. Chairs and a tent will be available in case of rain, and the community is invited to attend a celebratory barbecue afterward.

But perhaps most important for the upcoming weekend, the wooded, private campsites with spectacular views are now open to campers on a first-come, first-served basis. And the views should be hard to beat: The complex sits on a bluff overlooking the Chulitna river to the west, offering vistas of the entire Alaska Range — including, of course, Denali.

The complex contains two separate campground loops — one with 32 RV sites, the other with 10 tent sites — plus a large group campsite that accommodate up to 50 people, a small picnic pavilion and a 90-foot interpretive pavilion with two fireplaces and displays on the natural and cultural history of the greater Denali area.

There are also two year-round public-use cabins and a third cabin that serves as housing for the campground host during summer, but is available for public use in the winter.

There's already been a lot of interest in the campground, Biessel said. Of note, all 32 sites on the RV side of the campground have electrical hookups, so you can enjoy all the perks of electricity without enduring the loud hum of generators. Five of those sites are pull-throughs, and almost all of them can accommodate up to 40-foot rigs.

In the walk-in tent campground, eight of the sites are available on a stand-alone basis, with grass and sod tent pads, fire pits, picnic tables and bearproof food lockers. The other two tent sites each come paired with one of the year-round Hunter and Tokosha public use cabins, which have been open for public use on a reservations basis since December 2016. Both cabins overlook the Alaska Range and are ADA accessible, as are all the sites in both campground loops. Fees are $30 a night for an RV site and $20/night for a walk-in tent site, or $75/night for either cabin.

Also ready for visitors are 2 miles of hardened gravel walking trails that, like the campsites, were planned out to maximize the benefit of their scenic setting. Of particular note, the 3/4-mile Moose Flats trail is completely ADA accessible and offers spectacular views of Denali on clear days. This trail network should see further expansion this year, with an eye toward showcasing natural features near the interpretive center. During the winter, the trails are groomed for skate and Nordic skiing.

The K'esugi Ken complex is part of what's been dubbed the South Denali Project, a multi-agency effort to expand visitor facilities and recreational opportunities in Denali State Park.

Visitors can enjoy one big perk of that collaboration starting today: The National Park Service is providing a full-time interpretive ranger who will offer daily campground presentations all summer. The scheduling for the talks may be spontaneous at first, but additional details will be posted on the South Denali Project portion of the Alaska State Parks website, dnr.alaska.gov/parks/, as they become available.

Another component of the South Denali Project ready for use is the new Curry Ridge Trail, a 2-mile series of switchbacks that take you up above treeline, at which point you can walk the tundra to beautiful Lake 1787 which, like some mountain peaks, is named for its elevation. The trail starts in the K'esugi Ken day use parking area and, although it is already open, be aware that trail work may continue through the summer. Eventually, the goal is to expand this trail until it links into the existing Kesugi Ridge system. Another potential project on the table is developing hardened campsites near the Lake 1787 to help maintain its pristine condition, in spite of the anticipated traffic.

Although the K'esugi Ken campsites are currently available on a first-come, first-served basis, you must reserve the cabins. Until recently those reservations were done through the Alaska State Parks website but, as of April 1, reservations for Alaska State Parks cabins are now done through ReserveAmerica.com, the same system used to reserve campsites and cabins managed by the U.S. Forest Service and the U.S. Fish and Wildlife Service.

The RV and tent campsites at K'esugi Ken will remain first-come, first-serve this year, but some of them may be available for reservations in 2018. The K'esugi Ken pavilions should be added to ReserveAmerica.com within the month; until that happens, you can reserve them by calling 907-745-8950.

The switch in reservations systems was prompted by the Alaska State Parks system's inability to keep pace with the number of facilities and growing demand. Switching to ReserveAmerica will make it easier to provide mobile access, process refunds, and adjust rental rates during periods of high vacancy.

Lisa Maloney is an Anchorage hiker and freelance writer.