If you fall during a river crossing, don't bring your friends down with you 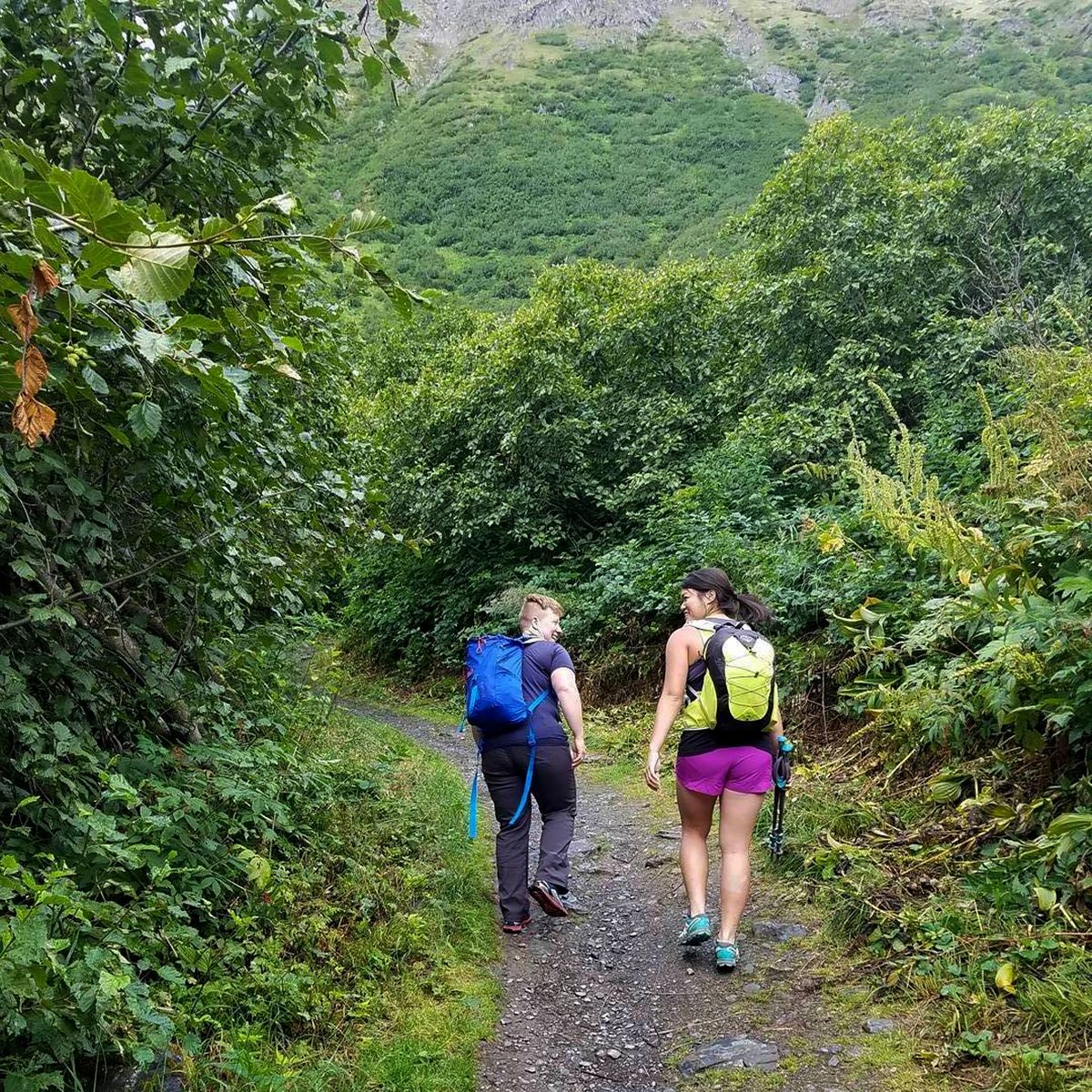 Toni Clark, left, and I started from Girdwood on the Crow Pass trail early Thursday, July 28, 2016, heading toward the Eagle River Nature Center. This was before I tried to bring her down with me while crossing the Eagle River. (Julia Terry)

Toni Clark, left, and I started from Girdwood on the Crow Pass trail early Thursday, July 28, 2016, heading toward the Eagle River Nature Center. This was before I tried to bring her down with me while crossing the Eagle River. (Julia Terry)

It's my own fault. I spend most of my outdoor time on rock, dirt, snow and ice. No matter how loose the rock, how punchy the snow, how slick the ice, I have enough familiarity with those conditions to produce a high level of comfort.

All it takes is one deep, frigid river crossing to make me wish I were on a jagged, fall-and-you-die knife-edge ridge instead.

It's that time of year when residents of Southcentral Alaska are drawing up plans for the rest of our precious summer weekends. For some, the 23-mile Crow Pass trek is an annual tradition, and fording the Eagle River is a much-anticipated highlight.

Last July, I was buzzing with excitement when my friend Toni Clark and I set out from the trailhead in Girdwood toward the Eagle River Nature Center on a long day hike.

The reality of that river crossing left much to be desired.

Two posts mark the starting and end points of the preferred route across the river, and water levels fluctuate depending on the time of day — anywhere from ankle-deep to your thighs, or higher. The riverbed surface is uneven and rocky. The current is forceful, and you don't need to be in the river long to leave with numb toes and red legs.

We linked arms, synchronized our footsteps, each of us grasping one trekking pole for balance. And forward we waded.

As we pressed ahead, I felt my nervousness increasing with every step. I slowed down and found myself fighting even harder against the current, with the water creeping up my legs. Then I lost my footing and landed on one knee, farther down in the shockingly cold water.

Panicking, I grabbed on to my friend's arm and shoulder and used her as an anchor to bring myself up again. She was, thankfully, steady in her footing.

Once we reached the other side of the river — I've never been so happy to dodge stinging insects, because at least I was on solid ground again — she offered a helpful suggestion.

"Next time, don't try to bring me down with you."

For some tips on river crossings, I turned to Alaska Dispatch News reader Paul Turner, a psychologist who lives in Kenai. He said he's been going on treks in the Arctic National Wildlife Refuge about every other year since 1984.

After more than 15 trips and about 200 days in ANWR — in addition to the hiking he's done elsewhere in Alaska since 1978 — Turner estimates he's completed dozens of Arctic river crossings.

"Water is the most dangerous thing in the Arctic," Turner said. "I'm a lot more afraid of (drowning) than bears."

Through the years, he's developed his own approach to crossing a river.

"Our preferred procedure … is to lock arms," he said. But "if it's not deep, someone watches the person crossing" as they ford the river individually.

"If there's a storm, wait — don't cross." Instead, he recommends that hikers "cross rivers the next day after the storm stops and water is lower."

And if you're able to decide when you'll cross a glacial river, he suggests aiming for the morning, not the afternoon, when levels are lower before the midday melt kicks in.

Footwear can be tricky. Some people opt to wear quick-drying trail runners (think more ventilation, less Gore-Tex) so they don't have to change their shoes to ford a river, even if it means soggy feet for a stretch. Turner and I prefer to shoulder the extra weight and carry river sandals or water shoes to change into for crossings, keeping our main hiking shoes dry.

Here's another Turner-approved tactic: Before I take that first step into the water, I'll unbuckle the hipbelt and sternum straps on a heavy backpack. That way, if the weight of my pack sends me off balance and the current is threatening to take me downriver, I can wriggle out of my pack to regain stability.

Otherwise, if I'm strapped in and I fall, that river crossing could turn into one sad float trip.

Remember how I said I slowed down during the Eagle River crossing? Turner's been in the Arctic with hiking partners who had that same habit, born out of an abundance of caution.

Doing that, however, can increase your risk of hypothermia.

If someone in your group shows signs of hypothermia — for example, shivering, loss of motor function, disorientation, slurred speech, pale skin and so on — know what you need to do to help them recover. Among the steps you can take: Get them in several layers of dry clothes, keep them hydrated and fueled, increase physical activity, wrap them in an emergency blanket or sleeping bag and build a fire for warmth.

During our conversation, Turner also emphasized the importance of keeping a cool head. From his experience fording rivers and scuba diving elsewhere, he described panic in water as "an automatic response." He urged using a calm, levelheaded approach and resisting that instinct to panic.

That's easy to say when you're not down on bended knee in the middle of a surging river, but it's something I tell myself over and over again when I'm in a dicey situation: Don't panic. Stay calm. Think rationally. Next step.

"There's some spiritual, soulful, peaceful thing about" being immersed in the Alaska outdoors, Turner said.

I wholeheartedly agree. But there's nothing like a swift rush of a river crossing to make me appreciate that corporal, physical tether to the material world, as well.

The Eagle River Nature Center will present a "Crow Pass 101" informational program inside the main building at 2 p.m. Sunday, June 4. The event is free, but parking is $5. As of Friday, June 2, snow remains prevalent from Crow Pass to Raven Gorge with evidence of late-season avalanche activity. Check the Crow Pass Trail Facebook page for the latest information on trail conditions.