At Denali base camp, unseasonable warmth creates dangers for climbers 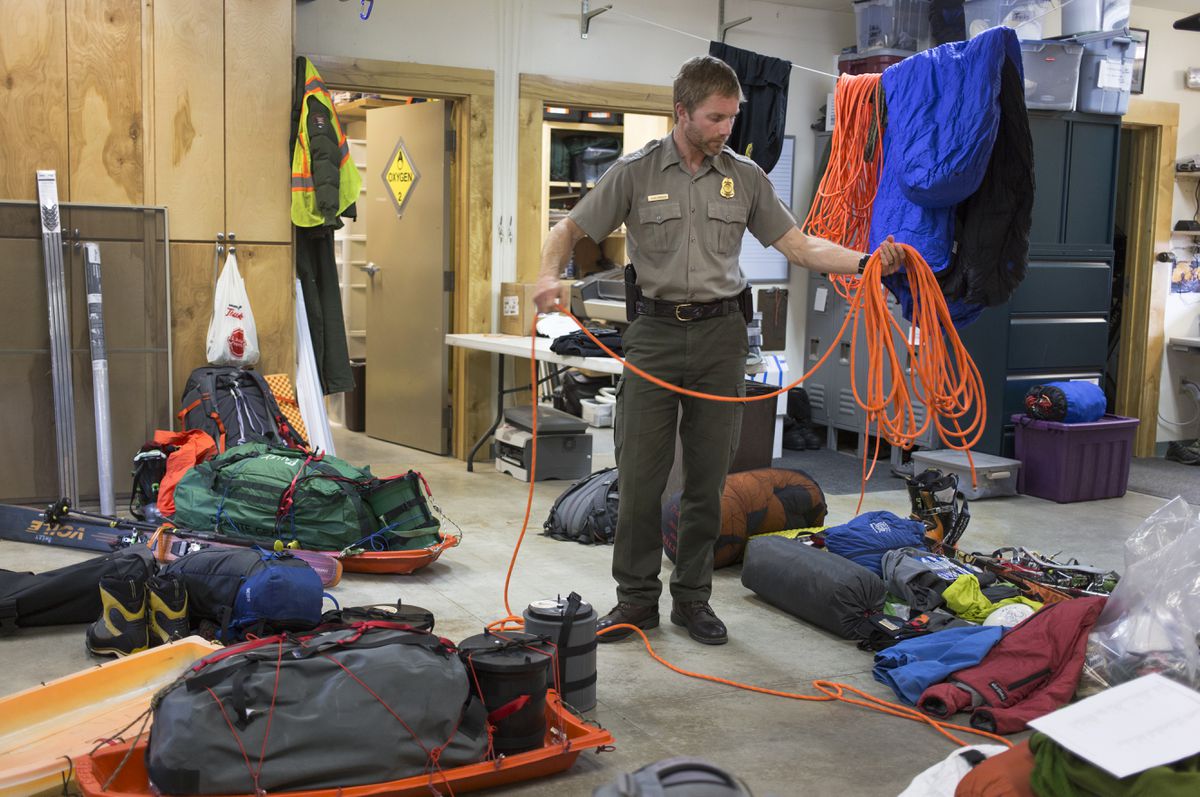 National Park Service mountaineering ranger Chris Erickson prepares for a patrol on Denali. Erickson was one of the rangers taking part in the 14-hour rescue that freed Martin Takac from a deep crevasse on Denali last week. (Rugile Kaladyte / Alaska Dispatch News)

National Park Service mountaineering ranger Chris Erickson prepares for a patrol on Denali. Erickson was one of the rangers taking part in the 14-hour rescue that freed Martin Takac from a deep crevasse on Denali last week. (Rugile Kaladyte / Alaska Dispatch News)

TALKEETNA — The Slovakian climber who fell 60 feet into a crevasse on Denali's Kahiltna Glacier last week might have been a victim of the mountain's weird spring weather and social pressures in which large climbing teams have split into inexperienced, smaller ones.

Martin Takac, 38, was with just one partner — and they weren't roped together — when he plummeted into a narrow frozen chute on the West Buttress Route early June 5.

Only a tight vise of ice stopped his fall and a grueling and unprecedented rescue saved his life. Takac remains hospitalized at Fairbanks Memorial Hospital in stable condition.

As the base camp for most climbers who challenge Denali, Kahiltna itself has become a huge challenge this year: A low snowpack has led to marginal snow bridges across the glacier's crevasses.

Rangers who monitor traffic on North America's tallest peak say the low snowpack poses a potentially dangerous scenario for climbers who begin the climb with larger groups but end up alone or in small clusters of mountaineers.

"The commitment to the team has become less," said Tucker Chenoweth, South District ranger in Talkeetna for Denali National Park and Preserve. "Folks are not intending to be solo but they end up that way."

The climbing season on Denali typically extends to July 4. About 1,100 to 1,200 people attempt Denali every year, increasingly in guided groups rather than independent parties.

At 7,200 feet on Kahiltna, base camp houses an international tent city as climbers wait to attempt Denali or to fly out after succeeding the ascent, or failing.

The zone between base camp at 7,200 feet on Kahiltna and a camp at 9,800 feet is especially dynamic this season as the glacier makes an early transition from winter to summer conditions, Chenoweth said.

[Inside the dramatic, 14-hour rescue that freed a climber from a deep crevasse on Denali]

Along with low snow, the annual warm-up came two weeks early — it rained for several days after Takac's fall, though freezing temperatures were expected to return at night. Low visibility and clouds are combining to prevent ski-equipped planes from landing on the glacier to pick up some climbing teams that want to return.

Climbers, particularly those going it alone, need to be prepared to pick a route around crevasses the same way an expert climber navigates sheer rock or ice, Chenoweth said.

"Reading glaciers is a difficult thing to do," he said. "The Kahiltna itself is an environment you need to be a master of, especially if you're going to do it yourself."

Teams from different countries bring a different climbing culture to the mountain, several guides and air taxi pilots said in interviews this week.

Japanese teams are widely known for a disciplined approach and tendency to stay together, even remaining roped up in camp.

Teams more accustomed to the smaller crevasses of the Alps or even the Himalayas don't always recognize dangers on the large and unstable Alaska Range glaciers like Kahiltna, said Todd Rutledge, co-owner of Mountain Trip, a guiding company that leads people on Denali.

"Climbers who gain experience in those ranges often travel on glaciers unroped, and I think they bring that cultural mentality to Alaska," Rutledge said. "They don't understand that we have different conditions. Our crevasse bridges form over much bigger crevasses than they would in these other ranges."

All told, there have been a half-dozen significant crevasse falls this season, according to Chenoweth. Two involved unroped climbers. Other smaller falls may not have been reported.

Denali's climbing season is now at its peak. Mountain Trip had seven teams out on Tuesday. A team of Japanese climbers making a TV documentary waited for the clouds to break Monday at Talkeetna Air Taxi.

Company owner Paul Roderick said he sees groups where individual climbers join together only to share the costs of the expensive trip but don't form a cohesive climbing unit.

"Sometimes they just go up there and just — boom — they scatter," he said.

Roderick said he had his own close call on a recent Alaska Range climb. He and a partner punched into a crevasse and roped up, Roderick said. "Then we fell in three more."

He said this season's snow is different: It never really "set up," remaining in unconsolidated layers created by snowfall punctuated by long periods of intense cold.

Rutledge, with Mountain Trip, said last week's rain all the way up to 11,000 feet was the earliest in the season he's seen for 24 years. Other pilots reported proliferating crevasses and avalanches tumbling down mountainsides.

"You would drop climbers off and you could hear rain hitting the wings," said Sheldon Air chief pilot David Lee, who's flown in the Alaska Range for 37 years.

"Part of it is people not using their head, but it's a very abnormal situation to have so many crevasses so early," he said. "It makes sense because we only got half the snow we usually get."

Chenoweth, the mountaineering ranger, said the snow may be low and warm-up early but the leading risk factor on the Kahiltna is still human error.

"It's the type of people and the inability to recognize the changing conditions," he said.