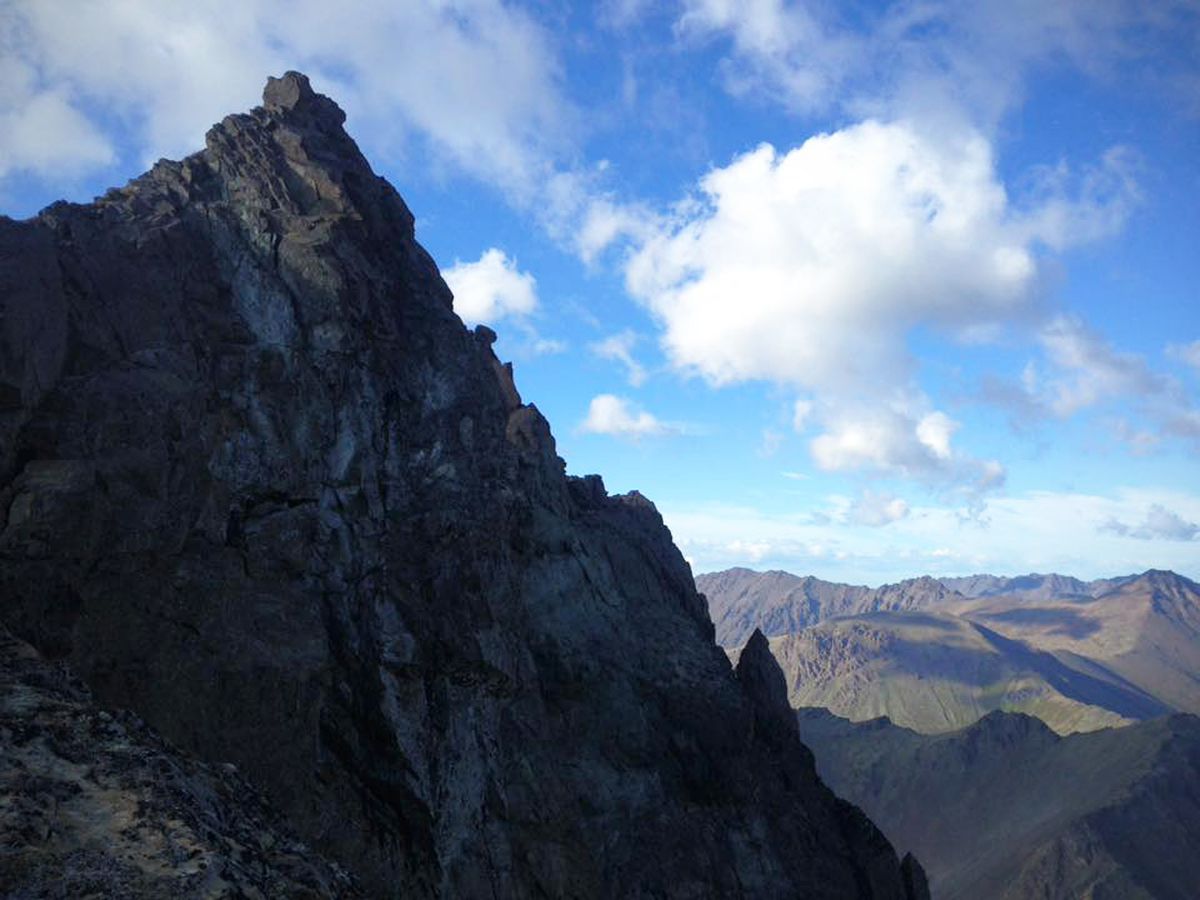 At the summit of North Suicide Peak, east of Rabbit Lake above the Anchorage Hillside, on Saturday, Aug. 27, 2016. (Vicky Ho / Alaska Dispatch News)

At the summit of North Suicide Peak, east of Rabbit Lake above the Anchorage Hillside, on Saturday, Aug. 27, 2016. (Vicky Ho / Alaska Dispatch News)

I woke to the sound of my alarm screeching in urgency as I groggily fumbled around to check the time on my phone.

Wait a second. This wasn't my alarm. My friend Tim was calling me.

[Start hiking early, or be willing to face the consequences]

To answer his question, I was snuggled up in my bed, cozy in Anchorage. Where I should've been was 90 miles away in Hope, about a half-hour earlier, meeting up with the rest of our group to raft Six Mile Creek. I had already paid for my share of our guided trip, but at that point, there was no way I could make it before they started floating.

The weather was ideal, especially along the Chugach front range. Whatever I did would have to be as much of a mental challenge as a physical one, as a form of penance for missing out on our rafting trip.

Close readers will remember that North Suicide is the site of my biggest Chugach injury to date. A loose rock was kicked down in Hauser's Gully; I failed to dip, dive or dodge; and my friend's dad cut up his spare shirt for me to use as a bandage, then hiked back to the trailhead with me.

Now I have a Pac-Man-shaped scar and dent in my left shin as a permanent reminder to always be vigilant, and carry a first-aid kit.

That happened about a year before our planned Six Mile trip. And though I knew summiting 5,065-foot North Suicide Peak was well within my ability, a skittishness lingered whenever I thought about heading up Hauser's Gully.

In fact, I hadn't tried that route again since my injury. But today would be the day.

I reached Rabbit Lake easily enough. That was the easy part. A couple of surveyors working at the base of Hauser's Gully asked me where I was going.

"Up to North Suicide Peak," I said, pointing at its formidable summit.

"Because it's a Saturday!" My flippant response belied my apprehension.

About a third of the way up the gully, I looked down and spotted a hiker following me. Having just passed the spot where I was injured a year earlier, I moved to the right, where the rock was more stable. The last thing I wanted to do was kick down a rock on someone else — paying it forward in the worst way.

The hiker called out to me from below.

"Have you been out here before?"

A long story. I gave him the quickest version of it that I could, shouting from afar and pointing at the scene of the crime.

The hiker behind me was Steve Thompson, my buddy's dad, the one who sacrificed a clean shirt for my makeshift bandage and made sure I returned to the car OK a year earlier when I was bloody, limping and giggling from the adrenaline rush.

Thompson wasn't supposed to be there, either. He should've been in Seward for the weekend, but his plans fell through.

Neither he nor I had returned to Hauser's Gully since The Incident. And neither of us was supposed to be in town that weekend. But there we were, a year later almost to the day.

For many Anchorage residents, running into someone you know on the trail isn't uncommon. This, though, was a moment of mountain serendipity.

I was happy to have company heading up to the summit — but I was thrilled about our chance encounter.

So, a year and five days later, we finished what we started, and summited North Suicide together.

Even better than that? There were no stitches this time around.