A road less traveled: Driving to McCarthy with kids 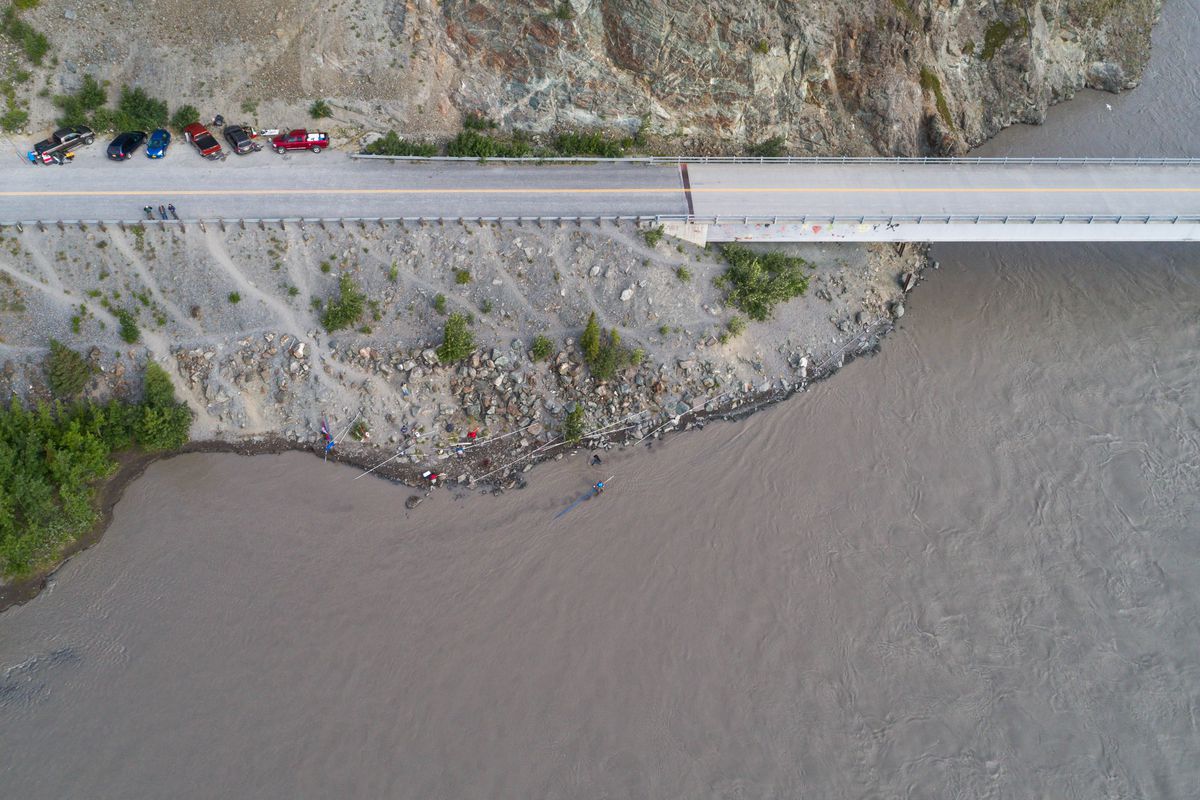 People dipnet for salmon on the Copper River near the Chitina-McCarthy Bridge in June. Pavement ends a bit farther down the road to McCarthy. (Loren Holmes / Alaska Dispatch News)

People dipnet for salmon on the Copper River near the Chitina-McCarthy Bridge in June. Pavement ends a bit farther down the road to McCarthy. (Loren Holmes / Alaska Dispatch News)

Folklore or true to life, the McCarthy Road holds mysterious allure for hardy road trippers whether they actually attempt the 60-mile gravel stretch or not.

"I remember camping with my family (at lakes along the road) in the 1980's," longtime Anchorage resident Jason Storter said. "It was our annual summer ritual, but I also remember the road would damn near shake the truck apart, so we drove about 10 miles per hour."

If nothing else, the McCarthy Road experience provides a slice of Alaskana many residents feel obligated to find during the short summer in the 49th state full of kid activities, fishing and a million tourists. The road is a purposeful connection between modern-day amenities and throwback to life with few frills. It is a link to the story of America's Industrial Revolution. For prepared families it can also be one of the most epic adventures of young children's lives.

Getting to the McCarthy Road actually requires using two others; the Richardson Highway traveling between Valdez and Fairbanks; and the Edgerton Highway, a ribbon of blacktop that winds 33 miles east from Richardson Highway Junction to tiny Chitina, gateway to McCarthy. Officially called Route 10, the Edgerton is a scenic country drive of rolling meadows and shivering aspen trees interspersed with small communities like Copper Center and Kenny Lake.

At nearly 60 miles, the McCarthy Road is a fair distance between Chitina and the footbridge leading into McCarthy (year-round population around 40). Built over much of the Copper River & Northwestern Railroad route that transported copper ore from Kennecott Mines to Cordova in the early 1900s, the road is now one of only two that enter Wrangell-St. Elias National Park (the other is far north near Nabesna). The Wrangell Mountains tower overhead as the road borders their base, and drivers will find themselves entering, then leaving, the national park, tribal, private and state land with curious regularity.

Prior to our first trip to McCarthy in 2011, we were regaled with tales of woe from others who had attempted, and in some cases failed, to navigate the distance. It was indeed rugged driving and perhaps we over-compensated for that inaugural journey, but as Meadow Bailey, communications director for the Alaska Department of Transportation says, "Drivers should be prepared."

That means, she told me, checking the Alaska Department of Transportation's 5-1-1 website (511alaska.gov) or signing up for alerts on your phone prior to arriving in Chitina. Carry safety gear too.

"We recommend safety items in all cars for any Alaska road trip," Bailey said. "Extra food, water, full-size spare tire and the jack; and for the McCarthy Road, a few gallons of gas isn't a bad idea, especially for shoulder season travel that really begins in August."

While the road is in excellent condition these days, consisting of chip-seal, gravel, and/or dirt, travelers should realize that anything could happen out there, far from cell service and other forms of roadside assistance. Our McCarthy road trip kit packs like a camping excursion, just in case weather, mechanical mayhem, or mad hunger strikes between Chitina and McCarthy. In the car we carry two water bottles for each person; nonperishable, nonsquishable food like energy bars, dried fruits, and a few candy bars; sleeping bags; first aid and tool kits, extra oil, and duct tape. Never changed a tire before? Practice at home since a slim grass shoulder alongside the road is no place to learn, and be sure your vehicle's fluids are up to par.

From Anchorage, the excursion to McCarthy takes seven to nine hours, depending upon road conditions, sightseeing expectations, and your confidence behind the wheel. Thus, it is important to plan accordingly, especially in early or late in the season, when daylight is fleeting. We typically depart Anchorage early, stop for gas in Glennallen, then proceed to Chitina, where the Wrangell-St. Elias Chitina District office is housed in a little log cabin a short walk from the Chitina Wayside.

Built in 1910 by the Ed S. Orr Stage Company, the cabin is one of Chitina's oldest buildings, and is a step back in time, not to mention an excellent place to begin your McCarthy Road experience.

Open through Labor Day, this cozy cabin offers maps, information, and Junior Ranger books for kids of any age to further their discovery of this part of the park. A recent addition was the creation of a McCarthy Road Audio Tour, pointing out significant sights between Chitina and McCarthy. Pick one up for free and drop it by the visitor center mailbox on your return trip or pass it along to someone else driving the road. Lasting nearly the entire 60 miles, the audio tour was a fascinating way to learn more about the area as we ambled along.

What will you see?

Plenty, including historic bridges and trestles spanning narrow canyons and creeks. Be sure to stop at the Kuskulana River Bridge at Mile 17.2, a one-lane structure constructed during the frigid winter of 1910 and now one of a few jaw-dropping scenic vistas along the McCarthy Road. Park near the wayside and hike below the bridge to ogle this engineering marvel 238 feet above the muddy Kuskulana River.

This is, incidentally, where the chip-seal pavement ends and the dirt begins. Another 12 miles up the road is the Gilahina Testle Wayside, where a wooden train trestle stands as testament to the efforts of workers to finish the rail line in time for the first load of copper ore. Originally 890 feet in length, the trestle has deteriorated over the years but visitors can stand at the bottom and admire the jigsaw-like precision of the half-million board feet of timber needed to finish the project.

Lakes dot the map, many within reach of the road or via a short hike, and trails wind through places like the Crystalline Hills where Dall sheep often graze along the rocky flanks. We also like to stop for a coffee or ice cream cone at the Spawning Grounds, a part food shack-part art gallery at Mile 44.5. The extra energy afforded from a double scoop or double shot is enough to power us the final miles to the end of the road.

There, we park in the public lot and revel in silence for a moment, hearing little but the rush of nearby Kennicott River and the buzz of mosquitos that seem to know exactly the second we emerge from the car. A slightly-disheveled shuttle driver emerges from a cabin at the lot and asks if we need a ride to the footbridge, the only way nonresidents can get to McCarthy proper.

"Sure," we say, hefting our backpacks toward the dusty minivan.

"How was the drive?" he asks, sincerely interested, since the road represents both the best and most challenging aspects of Alaska road tripping.

My son looks up at him and responds with one word.

And we hadn't even crossed the bridge yet.

McCarthy Road — If you go

*Distance: Edgerton Highway to Chitina is 33.5 miles. McCarthy Road courses 59.4 miles from Chitina. Allow at least two hours each way to drive the McCarthy Road with no stops. Watch for frost heaves, potholes (especially during or after a rain), and slippery mud. Keep kids in age-appropriate car seats at all times. There are several waysides at strategic distances along the road for pit stops and trash disposal.

*Rental cars: Most common rental companies, including those with RVs, do not allow travel on the McCarthy Road, and drivers who ignore this pay a hefty fine. The National Park Service lists several smaller businesses that rent to McCarthy travelers.

*Communications: Depending upon your cell provider, there is little to no coverage beyond Chitina, and even in McCarthy or Kennecott service is sparse. Do not depend upon GPS for directions or your phone to call 911. Carry a paper map or The Milepost for reliable information. Plan to be self-sufficient.

*Activities: Camping is available at Liberty Falls near Chitina at Mile 23.5 of Edgerton Highway or Copper River Campground just past the Copper River Bridge along Mile 1.6 of the McCarthy Road. Both are primitive and operated by the state.

Silver Lake and Sculpin Lake are located at Miles 10.6 and 12.3, respectively. Toss a line in the water and reel in a rainbow trout from these stocked lakes.

At Mile 59.4 sits the official end of the McCarthy Road. Park in one of the designated lots and walk, bike, or shuttle to the McCarthy footbridge. Camping is available at Glacier View Campground. Other overnight accommodations available.

Erin Kirkland is author of the Alaska On the Go guidebook series and publisher of AKontheGO.com, a website dedicated to family travel and outdoor recreation.