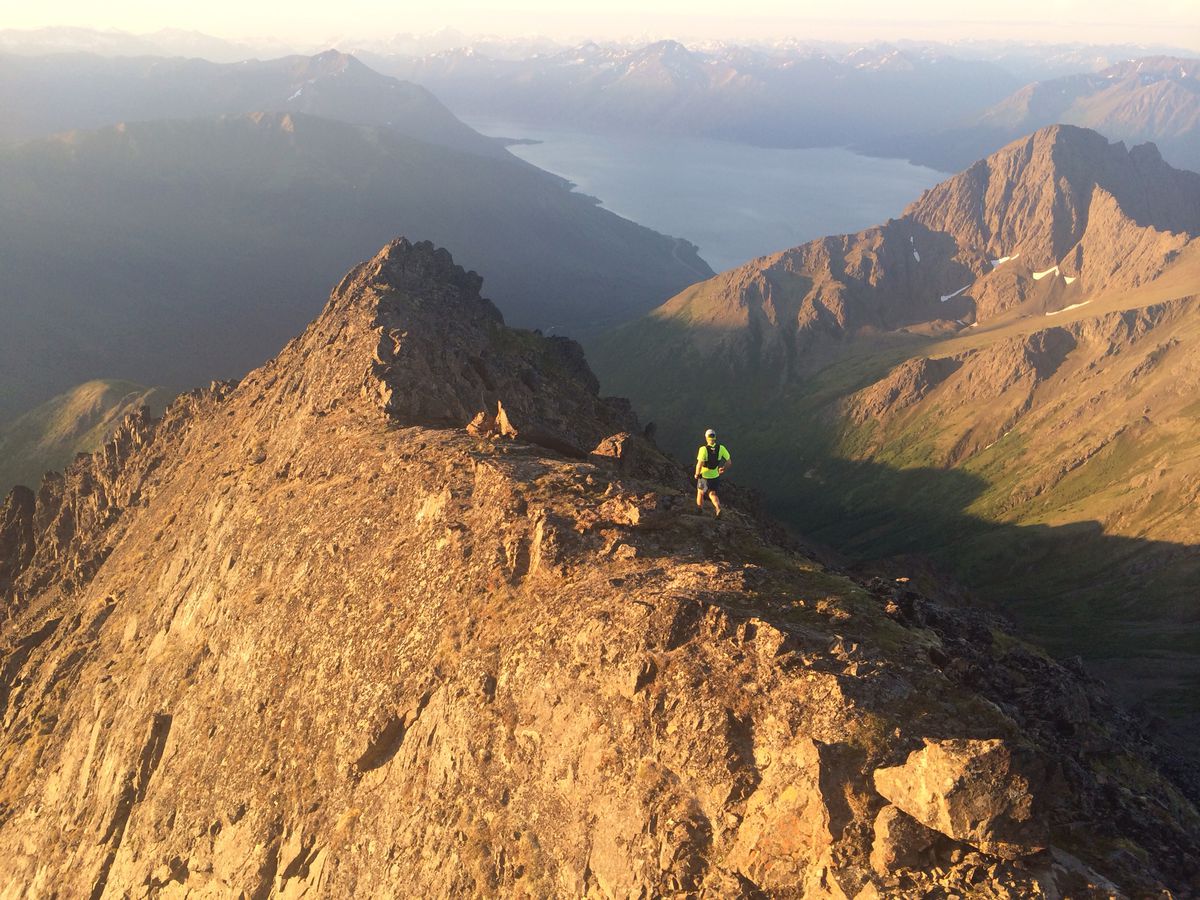 On a perfect Saturday earlier this month, Arneson and Peter Mamrol set a speed record for climbing the dozen peaks towering 5,000 feet or more in the front range of the Chugach Mountains.

The Anchorage men topped the 12 peaks that make up what's known as the Chugach Front Linkup — the mountains that provide Anchorage with a spectacular east-side backdrop — in 18 hours and 10 minutes. They sliced four hours off the previous best of 22:10, set last year by Harlow Robinson and Matias Saari.

According to Mamrol's GPS, the journey through totaled 44 miles with 20,800 feet of climbing.

"I think we were pretty fortunate with how everything went," said Mamrol, 24. "Things went just about as well as they could. We maybe made a couple of very brief wrong turns but, really, I think overall it went very smoothly."

The adventure began at the Rabbit Lake trailhead a little before 4 a.m. on July 22. It ended at the Stuckagain Heights trailhead around 10 p.m.

The men traveled light – each carried about five pounds, Mamrol said. For nourishment, they brought Gu energy gel, a couple of sandwiches, energy bars, trail mix and some gummies.

"We definitely went out there to see how fast we could do it," Mamrol said. "I think we ended up going about as fast as we could.

"We took some stops to fill our water bottles. We took one stop around midway of about 10 or 15 minutes."

They paused on each summit to take photos and enjoy the view, but mostly they were on the move.

"Any ridgeline with a sheep trail on it, we would try to run it," Arneson said. "We were able to run a lot, actually."

"We met through a friend this spring and we've been doing some trail running together throughout the summer," Arneson said. "Peter had brought (the climb) up a couple of weeks ago and we had wanted to do a little more scouting, but we had a good weather window and we were both available, so we decided to do it."

Mamrol had previously climbed eight of the 12 peaks – all but Avalanche, Hidden Peak, Willawaw and Temptation Peak. Arneson had only climbed two of them – Williwaw and O'Malley.

"I can only think of a couple of instances where we were undecided and we went back-and-forth," he said.

They took it slow on some of the rockier ridge lines, but it was essentially a trouble-free day in the mountains, both men said.

And while setting the record was nice, both hope their accomplishment will inspire others to take on the challenging hike.

"It'd be really cool to see more runners go out and give it a go," Arneson said.

Unofficially, only 15 people have completed the Chugach Front Linkup since hiking guru Shawn Lyons, author of "The Walk-About Guide to Alaska," first did it in 1990.

Six of the 15 people who have completed the trip did so in the last two summers, according to records kept by mountain guide Joe Stock of Stock Alpine LLC.

"The Chugach Front Linkup may become popular, but it is still very difficult," Stock said by email. "Many people talk about it, but relatively few will actually do it. It requires endurance, scrambling ability and intimate knowledge of the Chugach Front."

Mamrol, who acknowledged that prior knowledge of the front range is critical for anyone attempting the trip, thinks the new speed record is within reach for others.

"I certainly hope that some people try it to see how fast it can be done," he said. "People certainly can do it faster."