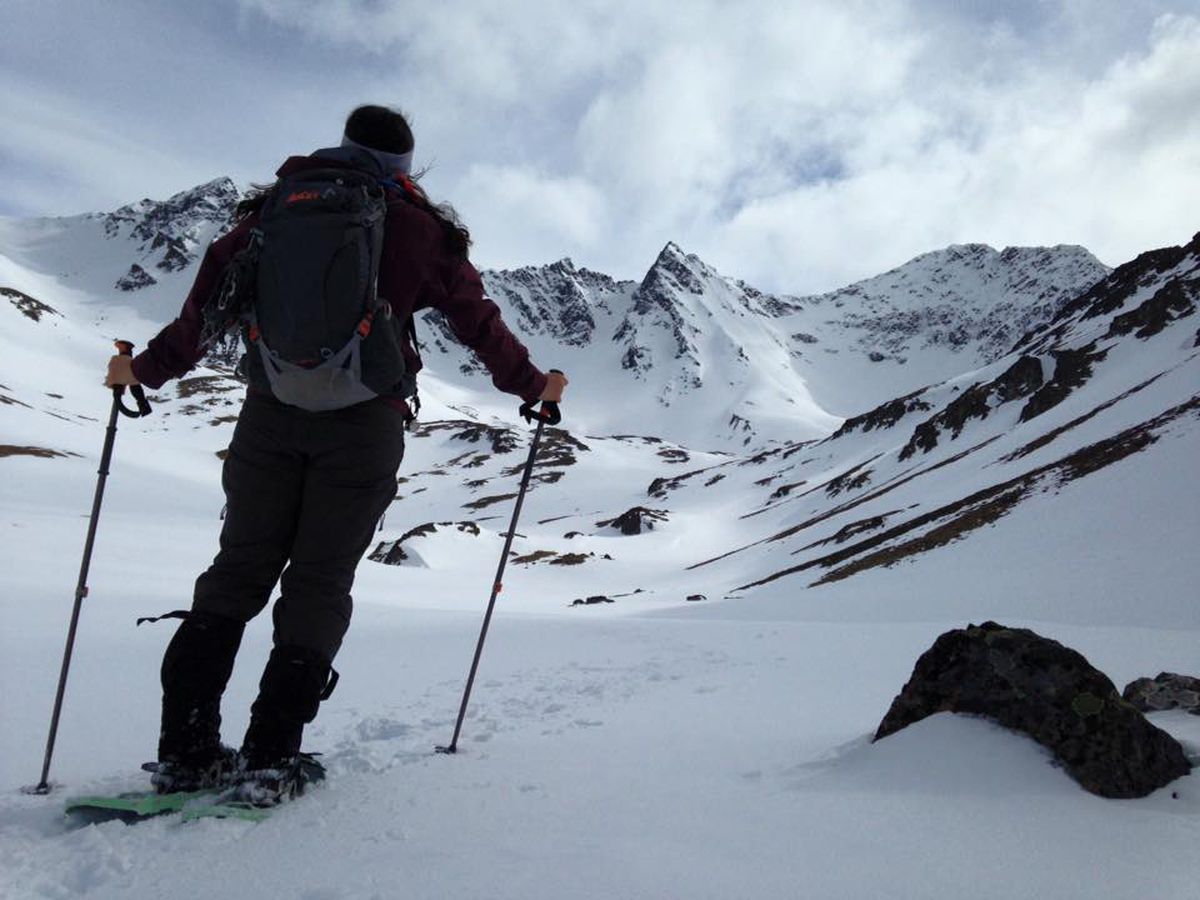 Looking back toward the tarn above Long Lake on April 15, 2016. (Vicky Ho / Alaska Dispatch News)

Looking back toward the tarn above Long Lake on April 15, 2016. (Vicky Ho / Alaska Dispatch News)

"Hey! Just let me know when you make it back OK."

I sent that message to a friend of mine who was visiting Anchorage from the Lower 48 last spring. Early on in his two-week trip, he tapped into the same love of hiking in Chugach State Park that I have.

This buddy — let's call him Pete — was eager to explore as much of the Chugach as possible. So, while I was at work in the evenings, I'd send him on different trails and he'd pick me up from the newspaper afterward, full of excitement from another outdoor escapade.

But on this night, when I hadn't heard from Pete by 9:30 p.m., I started to grow concerned. That's when I checked in with him.

As I waited for a response, the depths of my worry grew. My mind hopscotched along the trail, picturing all the hazards he could've faced: an untimely boulder drop, stomping moose, late avalanches and early bears. I thought of what it would be like to face his family, the guilt and recriminations that lay ahead as the reckless individual who let their loved one venture into the mountains alone. I plotted out how I would mount a search in case Pete never responded.

My imagination gets carried away sometimes.

About 45 minutes later, I followed up: "Proof of life, I need proof of life."

Surely there'd be a logical reason for Pete's silence. Maybe his phone died, or he was driving — though he should've been back by then. I was kicking myself for not reviewing some kind of timeline for checking in with him earlier.

He was an adult fully capable of taking care of himself, and I didn't want to hover. All the same, I was tiptoeing toward panic mode, casting nervous glances toward the parking lot and waiting for him to arrive.

Actually, I realized: He was right on time.

As for his silence, he'd had trouble using his cellphone since he arrived in Alaska — an issue with his carrier being recognized intermittently up here.

Ah. Yes. It was all coming back to me now.

[Whether paddling in place or going in reverse, this amateur is a work in progress]

That moment, which revealed how dramatic my imagination can be, also taught me the importance of bringing a trip plan around full circle.

Telling someone where you're going before you head into the backcountry is a no-brainer. But telling that person when you're safe is also critical, so you don't leave them wondering about your fate.

I have a rotating list of safety buddies. Before I head to the mountains, I'll tell one of them — someone in town who will be able to contact troopers in case of emergency — my plan. With some variations, that plan will consist of at least four key pieces of knowledge: 1) where I'm going; 2) my backup plan in case Option 1 falls through; 3) when I expect to be back; and 4) when they should call for help.

This is mostly common sense. Clarifying that fourth element, though, takes the guesswork out of calling for help. If I don't do that, then my friends are on the hook after my expected return time, unsure of what course of action to take.

I don't want to bring uncertainty into the equation.

One tip on telling someone your backup plan: An Alaska Avalanche School instructor recommended not being too specific. You may need to deviate from Plan A and Plan B for any number of reasons, and giving others a narrow window into your location could doom search efforts to failure.

And when it comes to search and rescue, having hard conversations with your loved ones is important before you venture far into the backcountry. For an acquaintance on a recent backpacking trip, that discussion is absolutely crucial. From her perspective, if the worst should happen — if a potential rescue turns into a body recovery — she wouldn't want the lives of rescuers to be endangered as well. (Speaking for myself, I would agree.)

The best way for me to avoid a situation like that is to put a premium on sound decision-making and risk management. Again, common sense. But we're lucky to have search-and-rescue resources here in Southcentral Alaska, and I'd never want to put someone else at risk. So for me, every adventure offers a lesson in accountability and self-reliance. That safety buddy back home is just an extra layer of insurance.

Since Pete's visit, "proof of life" has become a familiar refrain on my hikes. It's how I describe that communication with a friend to let them know I'm safe.

Sometimes, it's a one-word text: "Alive!" At other times, I'll send a photo of my post-hike meal, or a summit, or my beat-up gear after a dispiriting bushwhack.

The medium may vary, but the message behind it remains the same: Stand down. I'm fine. Thanks for having my back — and the next time you go outside, I'll have yours.