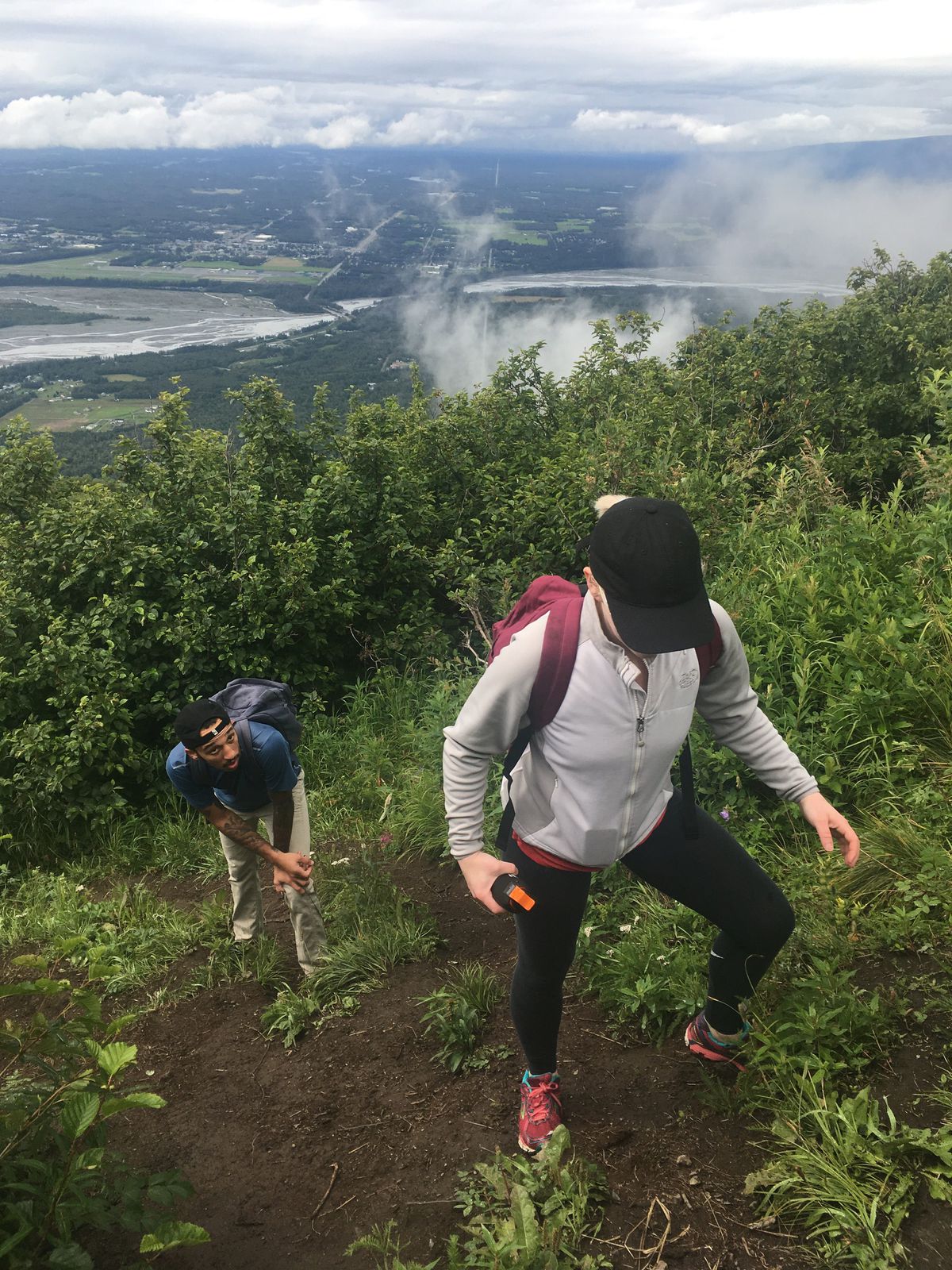 PALMER — My sister lives in Nashville, Tennessee. She has visited me in Alaska twice. She was here for a week in 2015, and her second visit concluded last week with a climb up Lazy Mountain. Watching her reach the top of the Mat-Su mountain was a reminder for me of how incredible it is to climb, and how amazing it is to live in a place where I'm surrounded by opportunities to gain elevation quickly.

It was also the start of a really exciting new era for my sister and me.

My sister is four years younger. For years, she studiously avoided taking up any interests that resembled mine. When I was 13 and wearing studded belts and dying my hair blue, she spent every penny of her allowance money on Abercrombie & Fitch khakis and sweaters. While I listened to moody Radiohead late into the night, she plastered "MMMBop" posters all over her childhood room. Later in my teenage years, when I discovered hiking and started spending much of my free time outside, she practiced singing and waited in a very long line to audition for "American Idol."

As adults, we hardly resemble each other. She wears the kind of clothing that an unfashionable person like me can't even begin to understand or fathom, much less try on. Meanwhile, I have a rotating collection of athletic tights that I wear whenever I can, paired with my "strappy" Teva flip-flops. She has a different hair color for every season; I get my hair cut only occasionally at Great Cuts because it's $15 and it will end up in a ponytail anyway.

At some point, she decided to visit me in Alaska to see what all the fuss was about.

Then she came back.

Her only request for this visit was to do some hiking. When she landed in Anchorage as a platinum blonde (wearing a black linen coveralls ensemble that confused me), she further clarified this request: She wanted to go to the top of a mountain. A mountain-y mountain.

I thought about my backyard and the knobby, slightly scary summit of the cruelly named Lazy Mountain, and asked her if she was sure. A mountain-y mountain. One that would really feel peak-like.

She said yes, and turned on the new Kesha album for our drive home from the airport.

From the ground, Lazy Mountain kind of resembles Bird Ridge along Turnagain Arm. It appears to slope gently up toward an ambitious but still moderate (by appearance) peak. Since 3,720-foot Lazy Mountain is dwarfed by 6,119-foot Matanuska Peak farther along the ridgeline, it appears smaller than it is.

There are several routes up Lazy. The classic is the norm for many Alaska trails: a no-nonsense, straight up, thigh-and-lung burner that starts at the Lazy Mountain and Morgan Horse Trail trailhead. A newer route starts in the same place but employs newfangled switchbacks that zigzag up through the trees and spit you out at treeline. The first trail takes about a mile to get to the same place as the switchbacks do in 3 miles.

My sister insisted that we bring two cans of bear spray. She held one of them the entire time while shoving the extra can into her (very sweet and very patient) boyfriend's backpack. She kept us engaged in an impressive level of conversation and, when that failed, sang Christmas songs (or Kesha). If there were bears on Lazy Mountain that day, they knew enough to keep to themselves.

When the switchback portion of the trail ended, we were treated to the straight-uphill climb toward the summit.

Above the trees, it's a different world, and suddenly the "moderate" peak we saw from the ground didn't seem so easy or so tame. We were above strands of those beautiful clouds that wrap around and through mountains. A small plane buzzed far below us. Light from a small break in the clouds somewhere over the Valley shone on nearby Pioneer Peak.

As we slowly worked our way over several false summits (and talked about what those are and I explained that yes, that's a real phrase, not one I made up), my sister got more and more vocal, but this time not about the bears.

She shouted, "WOW! WOW! WOW! This is AWESOME! I get it! I get why you live here! I am addicted! I want to do this AGAIN!"

Then she got quiet as we approached the summit, which feels a little dicey with steep drops on each side. We sat at the summit about 10 minutes, watching the clouds move quickly around us, revealing and then concealing valleys and peaks to each side. The weather turned quickly, suddenly feeling close to snowing. The temperature dropped and the wind picked up as we decided to turn around and begin our descent. My sister announced that this is what it must feel like to be on K2 (we'd watched a documentary on it the night before).

If someone told me when I was much younger that while I may not have punk rock and fashion in common with my sister, someday I'd get something better, I wouldn't have believed them. It's funny — and amazing — how we both arrived at the same place in such different ways.

Alli Harvey lives in Palmer and plays throughout Southcentral.