More Alaska women want to try hunting. Here’s how to get started. 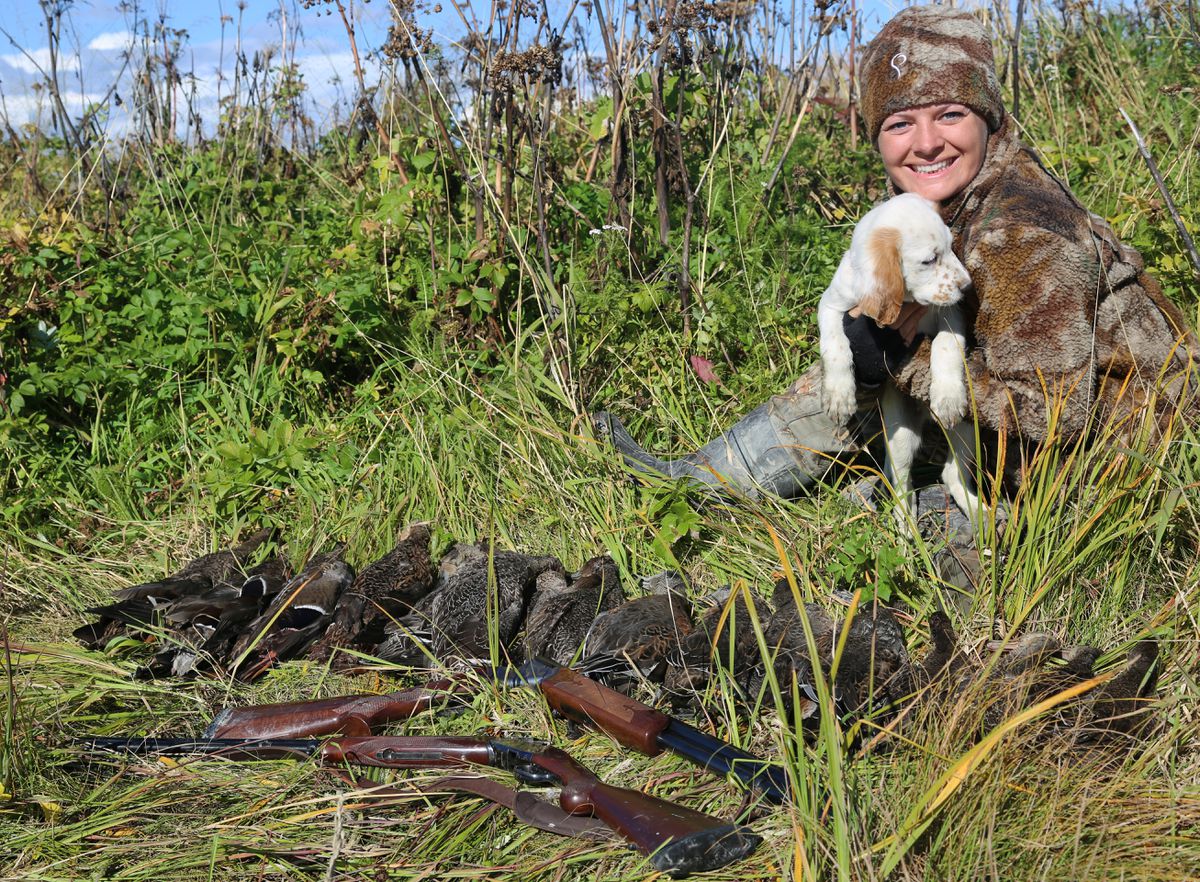 Christine Cunningham holds Boss, an English setter puppy that tagged along on a remote duck hunting trip on the Redoubt Bay Flats in 2014. (Photo by Steve Meyer)

Christine Cunningham holds Boss, an English setter puppy that tagged along on a remote duck hunting trip on the Redoubt Bay Flats in 2014. (Photo by Steve Meyer)

The Kenai River Flats smelled like ducks — the damp chill in the air and the sound of flights overhead mixed with the decomposing tidal swamp to make up the recognizable qualities of the waterfowl season on a late October morning.

The tide books called for a 24-foot tide the day I followed Steve out on the flats. As we walked, the water level sloshed higher and higher against my waders. We figured it wouldn't get any higher than the 24 feet listed, which would put us in water up to our waists. But the water kept rising.

It was higher than our waists when Steve caught a floating crate that we used to crawl onto an old stump. We watched in amazement as the flats turned into an ocean around us. Search and rescue would lift two unlucky duck hunters off the same stump the next day. Instead, we waited and broke out the sandwiches.

There were more mallards than we had ever seen on the flats in one day. They floated by just out of range. We wouldn't be able to retrieve them even if we had a shot. That's one of the reasons we need a dog, I thought. But, I also wondered if we were above the mean margin-of-error mark.

It was getting cold, and it made sense that when the tide finally went back out, we'd call it a day. Three hours later we plunged back into the now-knee-deep water. I headed toward the vehicle parked on the roadway. That was not the direction Steve was going. I turned and caught up with him. My feet were numb inside my hip waders.

"Where are you going?" I asked.

"After that?" I questioned, "We're still going duck hunting after that?"

There was no response, and he trudged further out into the flats. I followed but added, "I don't think there's ever been a time in my life where I've been so cold."

He stopped and looked at me. "We can go back to the car, or we can go duck hunting," he said. "It's up to you." Somehow I forgot that there is no sympathy in hunting. I had also forgotten that the joy of waterfowling is so often the misery involved, and that D.H. Lawrence once wrote: "Never saw a wild thing sorry for itself."

I looked back at the car with its promise of warmth, and I looked at the distant blind. It was beaten down by the tide and would be as comfortable to occupy as clinging to the branches of a wet tree.

It's difficult to pinpoint the moment I went from hunting once or twice to identifying myself as a hunter. It happened over a few years in my late 20s when certain life lessons came to me in the hunting fields. The memory of our day on the stump is one of those lessons — it was only my second waterfowl season.

When we left the house to go hunt, the most valuable part of the experience was in the fact that we left a comfortable place for a wild place. I would tell friends about my trips, and they would wince or inquire about cold nights, grueling slogs through marsh, bug-infested swamps, killing an animal, or cleaning and packing game.

"Why do you want to do that?" some would ask. Not everyone in my circle grew up hunting in Alaska, where they harvested moose and fish to fill the freezer. I'd grown up here, but fish and game meat came to my family from others. No one I knew hunted.

My story is not unusual as more and more women get their start hunting as adults. The percentage of female hunters continues to grow since the statistic first gained national recognition in 2006 — especially in Alaska. Today, about 20 percent of Alaska hunters are women, nearly double the national percentage. For them, the focus tends to be healthy game meat. But self-sufficiency and a deeper connection to the environment are important too.

The facts that women excel at building communities and that greater opportunities exist for women today than 20 years ago contribute to the rise in numbers. There are also more gateways to participation than ever, even as the overall number of hunters declines.

The question "How do I get started hunting?" probably wasn't asked in earlier times as much as it is today. The number of families in the U.S. raising children who hunt, farm or ranch has declined while the urban landscape has sprawled and an internet connection competes with a connection to the natural world.

If no one in your life hunts and can nurture a beginner, a good place to start is a hunter-safety course. Most states require successful completion of an approved hunter's education course to legally hunt. In Alaska, hunters born on or after Jan. 1, 1986, must complete the course.

The courses cover the basics — an overview of firearms safety, hunting information and wildlife conservation. But a hunter's education certificate is like a driver's license — the permitted activity requires practice and comes with responsibilities.

My biggest concerns as a beginning hunter were what to do if I wounded an animal and how to properly care for game meat. Neither of these was something I wanted to encounter alone for the first time.

The hunter's education program in Alaska partners with other programs such as Becoming an Outdoors Woman, a national program offering detailed and hands-on outdoor skills workshops geared toward women. One of the most popular of these is the annual winter workshop in Chickaloon, which offers a broad variety of outdoor skills classes.

The Alaska Department of Fish and Game and Outdoor Heritage Foundation also provide information, resources and events that promote the wise use of Alaska's natural resources.

If you're interested in hunting with bird dogs, the Arctic Bird Dog Association or other Alaska gun dog clubs provide training opportunities and events. Shooting ranges and clubs are always looking for recruits, and you're likely to meet like-minded people who are willing to offer ideas on how to transition shooting skills from the range to the field. For archery hunting, the Alaska State Archery Association and Alaska Bowhunters Association provide information on local clubs and events as well as other resources to encourage beginners.

Hunting came to me as an adult invited to duck hunt by my best friend, who wanted to return to the field after spending a career away from all things hunting. We both approached the outdoors with a sense of wonder and could not have predicted the mistakes, lessons and fun we would have over the decade that followed.

I look back on those years and attempt to remember what day changed my life forever — was it the first day, the biggest lesson or the decision to hunt birds with dogs?

Probably all of it — from my first chat with a hen mallard on a pond in a remote marsh and knowing I wouldn't shoot her or any bird on the water, to watching my chocolate Lab go after her first widgeon in a tidal slough and bring it back to me with a wagging tail. It was being able to sit with my own physical misery time and time again to be part of a lifestyle that asks more of me.

The hunting experience offers many challenges and rewards. There is no one path or how-to course to obtain healthy game meat because the never-ending learning process is part of what makes the practice of hunting so rewarding.

If none of the above ideas work for you, and you still want to hunt but don't know how to get started, send me an email at cunningham@yogaforduckhunters.com and I will help you find a way. It's worth it.

Christine Cunningham of Soldotna is a lifelong Alaskan and avid hunter. On alternate weeks, she writes about Alaska hunting.