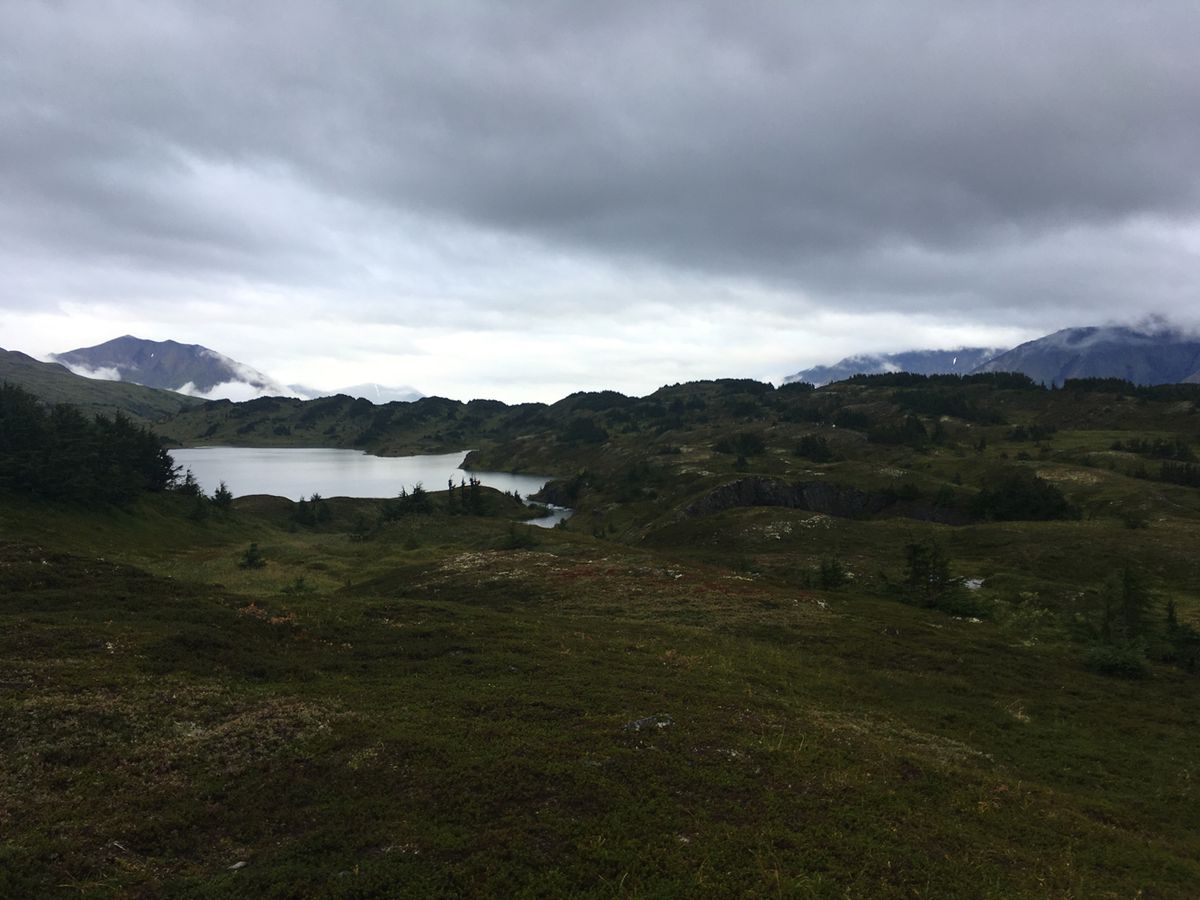 Lost Lake under cloudy skies near the Boy Scout aid station at Mile 8 of the Lost Lake trail on Saturday, Aug. 26. (Photo by Alli Harvey)

Lost Lake under cloudy skies near the Boy Scout aid station at Mile 8 of the Lost Lake trail on Saturday, Aug. 26. (Photo by Alli Harvey)

The Lost Lake Run in Seward always impressed me, but I never thought I'd actually get to run it until about a month ago. Yes, it looked amazing. But it also seemed like it might be a bit out of my league, and the hardest part seemed to be getting in.

The race was started in 1992 to raise funds to fight for the cure for cystic fibrosis, an often fatal disease during which mucus build in the airways, making breathing difficult and causing lung damage. It affects about 30,000 Americans.

I first heard about Lost Lake in 2008. Back then, I was training for my first marathon, and I thought that even a road runner like me would have a shot at a race like Lost Lake. I knew firsthand from hiking and backpacking that the trail is gorgeous. And the 2,000-foot elevation gain over 5 miles makes it less daunting than other Alaska mountain races.

Still, the race is so popular it's difficult to get in. In fact, this was the first year the race was run on a lottery system to even out the playing field. I'm not a competitive person by nature. I told myself that if I continued to try and fail at entering Lost Lake, I'd stage a point-to-point run of the trail with friends. That would be enough for me.

So I was surprised when I was traveling in muggy Washington D.C. in early August and received a text from my husband. He said that since we were waitlisted for the race, we were being offered the opportunity to put a day of trail work to clear out brush in exchange for race registration. Did I want to spend Saturday on a hot date in Seward with him weed whacking Devil's Club?

I considered my options. The Lost Lake Run, which at that point was three weeks out, seemed like a world away from 100-degree D.C. I hadn't exactly been training, and I'm not known for my mountain running skill. That's my husband's thing. Trail running, sure, I'm into that. But those crazy Matanuska Peak and Mount Marathon trails? No thanks.

But I said yes. What else could I say? I'd been wanting to do this race for years.

The race course is about 16 miles long on the Lost Lake Trail from Primrose Campground to the Bear Creek Fire Department at Mile 5.5 of the Seward Highway. I had plenty of time to contemplate the distance during the shuttle bus ride from the Fire Department to the race start. The morning of the race, it was pouring rain at the shuttle bus pick up.

Let me clarify what I mean by "pouring." It was the buckets kind that Dylan sang about. It was the insult-to-injury downpour we get after a summer full of rain, each droplet made up of a middle finger that stings as it falls. It was the kind of rain that made me worried about running up a mountain pass, soggy wet from running under the open sky and unable to warm up. I hugged my arms and looked out the bus window into the woods as we drove toward the start. I'd heard that this race had consistently good weather, year after surprising year. Not today.

Then the rain stopped.

Race director Patrick Simpson queued up the start of the race as runners assembled. He announced that the evening before, 600 meals had been served to racers and friends/family by the Resurrection Roadhouse, 100 meals more than in prior years (and all donated). He thanked race sponsors. Along with registration fees and in-kind donations, they ultimately inform the size of the check sent to the Cystic Fibrosis Foundation.

Simpson believes it will be about $260,000 this year, about $50,000 more than 2016. In its 25 years, the Lost Lake Run has raised more than $2.5 million for cystic fibrosis. The race was founded to help fight the disease, and the Lost Lakes trail was a clear winner for the route. As the race's popularity expanded, more and more people flock from Anchorage to run. Despite full fields, the race has a real community feel, complete with a live band and barbecue afterward.

By the time the race started, there was a stretch of blue sky amid the clouds that was hard to believe after the morning downpour. I later learned from Simpson that of 750 people allowed on the trail for the race under U.S. Forest Service rules, only 24 people who had picked up their bibs the night before didn't show up to race. So, I guess this was our reward — and I was feeling excited, anxious, and grateful about the running ahead.

I followed my husband's advice. I ran the flats, and hiked the hills. There are a surprising number of flat sections of trail on the Primrose side, for a trail that steadily winds up some 2,000 feet. Toward the top, I made friends with a pair of women who I'd been leap-frogging all morning. We chatted as we ran the small hills along the ridge, and time seemed to pass quickly. By the time we reached the 8-mile marker, where Boy Scouts handed us Gatorade, I didn't feel tired. Instead, I was confident I'd be fine. By alternating running and walking, nothing was sore. I finished in just under four hours, a slow but steady pace I was proud of.

There were a few powerful moments along the trail. One was a recurring moment every half mile when I saw a marker. Each marker featured a picture of someone battling cystic fibrosis, "so (runners) can actually see the faces of the people they're helping as they're running," Simpson later explained. He wanted runners to feel connected, and inspired to push harder. "Here I am running along, grumbling about how hard it is for me to breathe, and I see these kids that every day this is how they feel, like they're breathing through a straw.

"And it gives them new energy, it invigorates them."

I found this to be true, and appreciated the thought that went into printing each of the placards and carefully setting them up along the trail as a reminder of the purpose of the race.

The other was the realization that although I'm still not a mountain runner — uphills were my weakest link compared to my strength, which is endurance — there was something about being on a trail that cleared my mind in a way road running does not. The focus I needed to steadily go uphill, avoid roots on the way down, or just take in the view now and again, felt like a completely new way of running.

Several hikers and fellow runners teased me for stopping to take photos or gasping at the view (someone asked if this was my first time on the trail), but it really felt like a new way of seeing the same place. I was grateful to finally participate in the Lost Lake Run after all of these years, and to be a small part of something big.