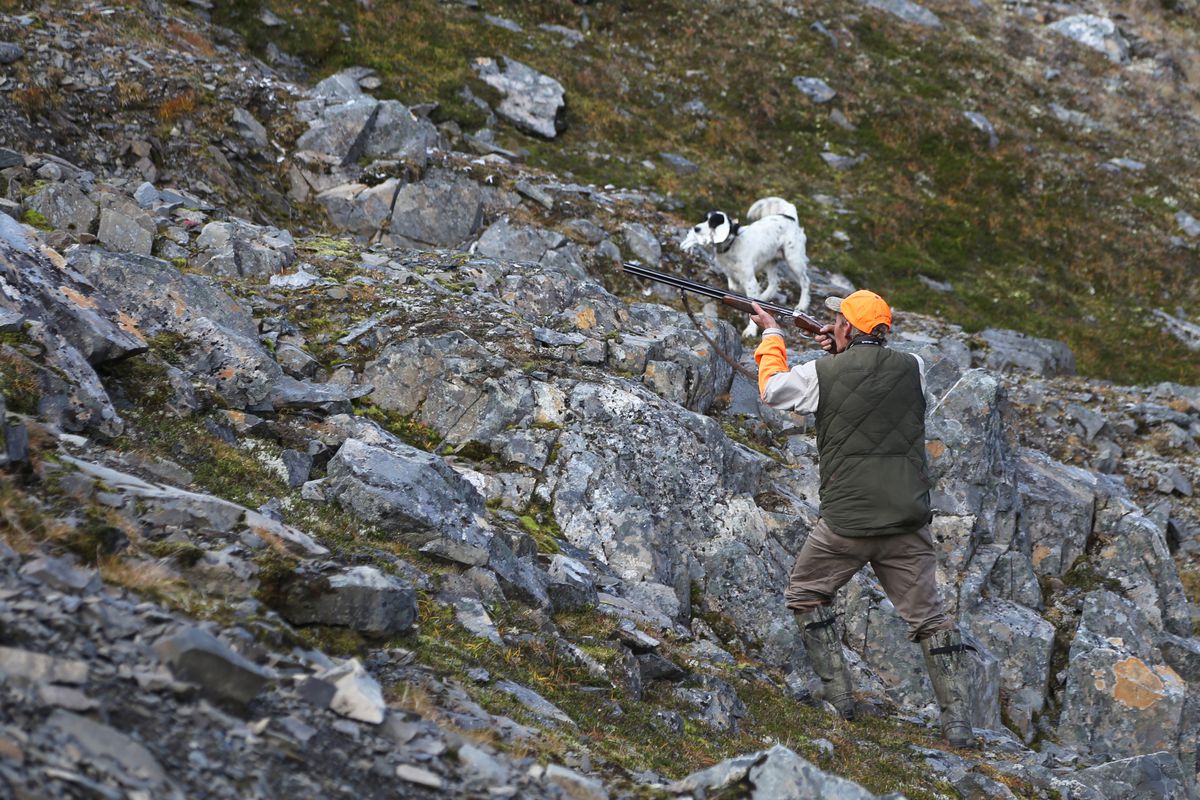 Steve Meyer takes aim in the Kenai Mountains in September of 2013. (Photo by Christine Cunningham)

Steve Meyer takes aim in the Kenai Mountains in September of 2013. (Photo by Christine Cunningham)

Standing in a clump of cattails, the mist on the slough before me shrouded the shapes of teal sitting on the far side. The cold water that had filled my short rubber boots quickly warmed in the mild September temperature. Dad was on another nearby point, and my attention darted between him — he would signal when legal shooting time arrived — and the ducks that would surely fly by when they got up to eat breakfast.

They did, but the signal hadn't come yet, so I hunkered down and waited. It was a long 15 minutes after legal light before the next flock came by to my right without warning, fast on the north wind. Pulling back the hammer of my single-barrel 20-gauge, I swung the gun up and tried to get in front of them. When I pressed the trigger I knew I was too slow, and nothing fell from the sky until a moment later when dad dropped two with two quick shots.

Long after dad had his limit, I was still shooting and he waited and watched until I had shot every shell I had, and remained duckless. As we walked back, the sun was high in the sky, as was my heart in my chest. I was hopelessly and forever hooked on wingshooting.

Dad didn't say much. His advice was limited to reminding me what I had learned during some practice sessions. "Just settle down and get the gun mounted, and swing past them. You'll figure it out," he told me.

[More Alaska women want to try hunting. Here's how to get started.]

The next weekend, as we headed out in the dark to another duck slough, he handed me a box of 3-inch magnum 20-gauge shells loaded with 7.5 shot. He said, "I imagine your cheek and your arm is still a bit sore and these won't feel good if you don't settle down and get the gun mounted and keep your head down."

I hadn't mentioned either of those things, but he knew, and he knew how bad I wanted to be good at this wingshooting business. He had every confidence I would get it.

The first shot I fired with those magnum shells woke me right up. I hurried, half mounted the gun into my upper bicep and let go.

The slam to the bruise on my arm and the slap to the other one on my cheek brought the lesson home in a microsecond. Some shots later, with a carefully mounted gun, my first duck dropped. It only took a half a box of shells.

On the way home dad asked how many shells I had left. There were 12 left in the box. "Well, if you want, we can go again tomorrow."

On the way out the next morning dad asked what I had seen when I connected with the duck. I couldn't really say. He advised that's pretty much how it goes with wingshooting. You just swing on the bird and let it happen. He told me that for the most part, I was trying to aim the gun, like I was shooting a rifle and that wasn't going to work out very well.

"Just look over the barrel at the bird, swing past it and press the trigger. Shoot where you look" he said. Simple stuff.

My average improved a bit — two ducks with 12 shots. I was a happy young duck hunter.

The early teal season ended and it would be a few more weeks before the regular season started, an eternity for an anxious young duck hunter.

When the next opener arrived it came with a cold, howling wind and driving rain. On the way, in the dark, over the heater fan and the clacking of the windshield wipers, Dad had a bit more advice. "A couple of things," he said. "Most of the time you are missing you are stopping the gun, you have to keep it moving through the shot. When the birds are further out you have to swing past them a bit further before you press the trigger."

The day didn't go well, at least for me. Miss after miss, I went through most of a box of shells before I connected on a slow Northern Shoveler, and my arm and my cheek had a familiar soreness.  "You sort of fell apart today," dad said. "It happens to everyone once in a while. The cold weather will throw your game off. Don't dwell on it, you'll be healed up by next weekend and you'll remember"

I did, and things got better, just in time for the pheasant opener. Having grown up following my dad and his friends on pheasant hunts, my inexperience convinced me that shooting a rooster going straight away was going to be easy.

After three straight misses, Dad hollered over, "Stop aiming, follow through." Oh, right. I collected my wits quick enough to take the rooster that flushed right out from under my feet.

And so it goes with wingshooting. It is a bit of an art, and it takes some time and patience to get good at it. Wingshooting at wild birds always presents a challenge, as no two birds fly the same. Time behind the trigger in the field is where you gain mastery. But, depending on how often one can go, it may take years, and there is a faster track.

Clay target shooting, trap, skeet, or sporting clays advances the skill. There is no better way to learn the basics of gun mount, follow through, head down, lead etc…, than these shooting sports.

Some additional issues surrounding wingshooting, such as gun fit, choke selection, patterning, and ammunition choice, are for a future discussion.

What dad was doing

It wasn't until years later, when I became a firearms instructor, that I grasped what my dad had been doing. He would always position himself where he could watch me. And he did. He didn't watch the birds to see if they fell, he watched me shoot and then passed on what he observed. It was up to me to take his advice.

The same will happen on the clays ranges. There will be shooters there with a lifetime of experience, and they'll watch you, if you ask them for help. They'll advance your skills and prepare you for the field at an accelerated rate.

I don't miss so much these days, but I still do. Christine, who is an accomplished wingshooter herself, delights in these occasions. I'll turn to her in disbelief as an easy bird flies away. Amid laughter, she'll say something like, "You were so proud of yourself, you couldn't wait to see and lifted your head." Or, "Nice shot, where the bird used too be," and I'll know I stopped the swing to soon. I don't cut her any slack either and our shooting always benefits from the humorous ribbing.

It's been 50 years since I pressed the trigger on my first wild bird. There is still nothing in the hunting/shooting world that compares to it. The anticipation of swinging the shotgun past a flying bird is as strong as ever. It was my first love in the hunting arena, and like all first loves, one never forgets.