With calm consistency, most Alaska dogs can be trained 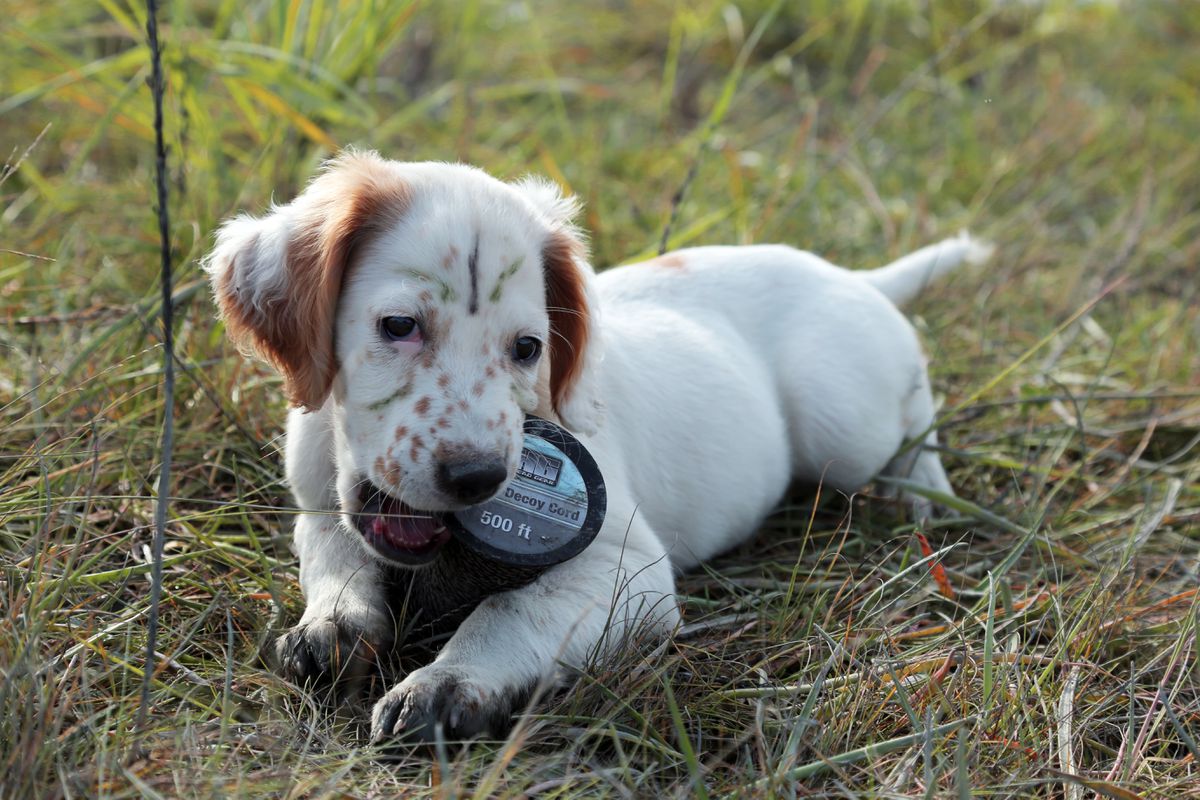 Boss, an English setter pup, plays during a trip to Redoubt Bay Flats in 2014. (Steve Meyer)

Boss, an English setter pup, plays during a trip to Redoubt Bay Flats in 2014. (Steve Meyer)

MACLAREN RIVER — My first dog memory is getting bitten by a cocker spaniel as a 3-year-old. I tried to take a bone away from the dog, whose name was Mittens. That was a bad idea. You should never attempt to take food away from a dog that's eating, but how many kids would think of that?

It is up to the dog owner to teach the animal. If your canine is going to associate with people or be in free-run situations, it must be trained responsibly.

Obviously, none of us can anticipate everything our dog might encounter. However, we must do our best to prepare our pets to deal with the unfamiliar. Dogs can be protective of their food, their space and their people. New environments and the unknown can cause nervousness. Recognize how your dog deals with the unfamiliar and train accordingly.

A dog that that dislikes gunshots and cowers under the truck can be trained to cope. The starting point in erasing this type of behavior is to find what the dog likes best. That may be chasing a ball or eating the evening meal. Begging at the table might be forgiven in the interest of acclimating your companion to fireworks, thunder and guns.

In most cases, an outside dog can be worked with while feeding. Start by giving your dog a favorite food. While the dog is eating, have a friend shoot a .22 some distance away. Most dogs will start at the shot, but with encouragement from their owner, they will stay put. A really spooky dog may need a leash. Don't get carried away; two or three shots is enough. Over the course of a few days, louder guns (or fireworks) can be used. When your dog no longer is overly concerned, the loud noise can come closer.

I have shot over the heads of dogs trained this way after less than a week of working with them.

Inside dogs can be trained with loud bangs in the other room. Don't use the .22. A book dropped on the floor is a good start. Cap guns can be used in the latter stages of training.

Aggression is one of the most dangerous aspects of dog behavior. People will stop coming to your house if your dog growls at them every time they come to the door.

Fortunately, this type of canine behavior is one of the easiest to solve. Your dog is protecting; thus he warns the interloper, whether they be a human or another dog. The solution is to take your dog out the back while the person comes in the front. Wait five minutes before letting your dog in. Use the front door. You will be amazed at the difference just changing the order of things makes.

Your protective buddy no longer has anything to protect, just a new person to meet. This method works 90 percent of the time. The same scenario works when introducing a new dog or cat into the household.

Another common fault — one that is more difficult to break — is chasing game. It may be entertaining to watch Rover try to catch the red squirrel in the backyard, but other hunters might not see the humor when your Lab sends the caribou herd over the next ridge.

Predatory animals are genetically programmed to chase things that run. Breaking this behavior is possible, but it requires considerable hands-on training. Shock collars may be one way to approach this issue, but there are other less intrusive methods that work as well. A less heavy-handed approach might have slower results, but it will last longer and need less refreshing.

The starting point is to teach the dog to sit, and most house dogs already know this. The "heel" command is next. Use a short lead and collar, not a choke collar. Encourage the dog to walk with its head near your knee. Start this project in the house where there are few distractions. An occasional slight jerk on the leash will remind your animal to stay in the proper position. How quickly the dog learns can be amazing. Ten minutes of concentrated work will see a majority of dogs at a rough heel. They will not be trail ready, but will be able to follow your command.

Once the "heel" command works, take your new obedience champ outside on a 100-foot rope. I am inclined toward a light line such as parachute cord. Go for a walk. Let Rover wander a bit. Each time he gets more than 25 feet from you, call him back and pull lightly on the cord. I've had a few dogs where the light tug required bracing both feet and reeling in my well-trained critter hand over hand. You will need at least three sessions.

Don't expect immediate success with these roughly outlined techniques. Books are written on dog training and misfires are common. The goal is to be a responsible pet owner. Keep your dogs under control while recreating and the campers around you will be happy to see you — and happy to pet your dog.